The British director’s film of du Maurier’s Rebecca for Netflix is ‘romantic and glamorous. It’s a big entertainment’ 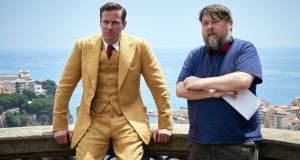 Armie Hammer and Ben Wheatley: “It’s not as punishing as the other films. It’s a big entertainment.” Photograph: Kerry Brown/Netflix

Things are seldom as they seem in Ben Wheatley movies. Even the murdering business is a bit of a nightmare. In Kill List (2011), two hitmen struggling with PTSD get mixed up with Wicker Mannish types. A caravan holiday – that takes in a National Park and a Tramway Museum – becomes a murderous rampage in Sightseers (2012). A raggle-taggle group of English civil war deserters fall under the psychedelic spell of a necromancer in A Field in England (2013). And you don’t want to know what happens in a luxury apartment block in Wheatley’s anarchic adaptation of JG Ballard’s High-Rise (2015).

There comes a moment in Wheatley’s unlikely new film version of Daphne du Maurier’s Rebecca when menacing, laughing guests take on cultish undertones and Pentangle’s anachronistic Let No Man Steal Your Thyme pipes up on the soundtrack. But this Wheatlian eruption lasts only for a moment. For most of the film’s duration, the contemporary king of folk horror eschews ley lines and the uncanny in favour of elegant period storytelling.

It’s something of a departure, he says. “It’s different from the other movies but that doesn’t necessarily mean that’s not something that was a struggle. That’s why I did it. It was to try and broaden the types of films that I make. I’ve done that movie to movie. From Kill List to Sightseers was a massive jump. From A Field in England to High-Rise was a massive jump. It’s not an unusual thing to do something unusual in the way that I work.”

Making a big, glossy picture is, Wheatley acknowledges, in keeping with a more general shift in tone. He is mellowing with age. His most recent film, Happy New Year, Colin Burstead, was a portrait of familial strife, extramarital affairs and seasonal bickering that aired on BBC2.

“Colin Burstead was the first film that I managed to make where no one died,” says Wheatley. “I was quite happy about that. It was a conscious decision. You know when you’ve made nine features – are we counting the Doctor Who episodes that played in cinemas? – and as you get older as well, the films can’t all be about people being bludgeoned to death. So when Rebecca came up I was like oh yeah, brilliant. It’s romantic and glamorous. It’s not as punishing as the other films. It’s a big entertainment.”

The already-spooky Manderley is made more disconcerting still by Max’s long absences and flashes of temper, constant reminders of the beauty of Mrs de Winter’s predecessor, and Mrs Danvers’ scheming against her new mistress.

“There were a lot of FX shots in the film but they’re mostly clean-up and environmental,” says the film-maker. “The bedroom windows at Manderley were green screen. But technically that’s no different from the stuff I was doing in High-Rise. Rebecca was a much longer shoot. It sounds a bit pathetic, I know, but it’s about having the strength to get through day to day and not lose focus. It’s a marathon not a sprint.

“And keeping that level of concentration is tricky. Down Terrace was shot in eight days. You think that if you shoot something like that, getting through 10 or 15 pages a day that you’ll have all the time in the world doing two pages a day with Rebecca. It seems to be the same pressure whatever the time frame. But a lot of classic movies were made in six or seven weeks, so there’s no excuse.

“Last night I dreamt I went to Manderley again,” begins Daphne du Maurier’s 1938 bestseller and all five film adaptations of the Gothic novel, not to mention four TV series, an Orson Welles radio version, a West End and Broadway play, and a 2006 musical. For all these iterations, it’s hard to overlook Alfred Hitchcock’s 1940 best picture winner, a golden age Hollywood classic that brought together the British director, studio mogul David O Selznick, and actors Joan Fontaine and Laurence Olivier.

“Well, I’d seen the film multiple times before,” says Wheatley. “So we watched that. And we watched the BBC one. And we watched the Charles Dance one as part of a due diligence. It was more to make sure the stuff that is specific to those movies – and that isn’t in the book – didn’t end up in our film. I don’t like working that way.

“I’m not that bothered about postmodernism. I’m not the kind of film-maker who goes to work each day thinking I’m going to make a film like so and so or I’m going to use all of these tropes. Sometimes I sit down to watch a film I’ve made, I’ll see something and think: ‘Oh God, that’s crept in from this place or that place’. But the process of making films is hard enough. You’re there with the script and the actors and the crew and the changes of mood in the room. It’s enough without having to think about other film-makers and films at the same time.”

Wheatley began his career with no-budget short films and animations before a few viral hits landed him several commercials. In 2006, he won a Lion award at Cannes advertising festival. Television worked followed, with the black comedy Ideal and skits written and directed for Armando Iannucci’s Time Trumpet. Since graduating to movies, Wheatley has won prizes at South by Southwest, Karlovy Vary, Toronto and Cannes.

Netflix – and its Rebecca production partners Working Title – is not alone in courting the Brighton-based director, who has recently returned from US and directorial duties on Strange Angel, a historical drama based on the life of Thelemic magician and rocket scientist Jack Parsons (played by Dublin actor Jack Reynor).

“Working on Strange Angel has changed the way I make things,” says Wheatley. “With my earlier films, I relied on swing camera coverage. Now I’m watching a lot of blocking. I’m looking at Spielberg movies and the movement of characters in spaces. I’m trying to develop that side of it, thinking about steadicam and Technocrane, and looking for that longer, classic shot. Technically – and this is very boring – American crews are different because the grip department is swallowed by the rigging department. But they’re structured to work fast in a way you’d have to plan much more meticulously for in the UK. And that’s great. I’ve wanted to do long-form TV for a while.”

Wheatley still enjoys making films, he says, even if the feature version of Ideal and Tomb Raider are currently on Covid-hold.

“Tomb Raider specifically is very complicated because it’s set all over the place,” says the director. “There is a lot of international travel. I’m really hoping that this is just going to be a two-year thing and will end like the Spanish flu. But at the moment, entertainment is a little bit like coming back from the second World War. Everybody’s been through this massive, shared experience which isn’t reflected by the stories that are being told.

“I felt that early on in the first weeks of lockdown. I was looking for what was on TV and thinking: ‘Well, this is the past; the story doesn’t make any sense to me now.’ Even movies about big spies. What’s the relevance of that?

“Equally, everything could flip back the other way and everybody might collectively decide that they don’t want to talk about this ever again.”

Rebecca is on Netflix from October 21st