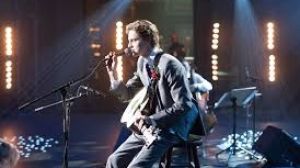 Fin Argus as Zach in Clouds

Zach Sobiech was an American singer-songwriter and musician from Minnesota who became a YouTube sensation in late 2012. Clouds, a song detailing his battle with cancer, became a global hit the following year, hitting No 1 on iTunes and charting in Ireland, the UK and on the Billboard Hot 100.

Sobiech died in May 2013 from complications from osteosarcoma, a rare bone condition, 17 days after his 18th birthday. Three years later, it was announced Warner Bros had acquired rights to Fly a Little Higher: How God Answered a Mom’s Small Prayer in a Big Way, a memoir by Zach’s mother Laura Sobiech.

The finished film lands on Disney Plus after last-minute Covid-19 negotiations. It’s a little spicier than the streaming platform’s own-label content. A girlfriend falls asleep in the hero’s bed! May feature scenes of bare-chest kissing! And yet it’s difficult to think of a better home for this mostly squeaky-clean dying-young movie.

Another internet star, Fin Argus (The Gifted), brings plenty of energy and goofball charm as Zach. Sabrina Carpenter (The Hate U Give) is his best friend and bandmate Sammy, who, from her goo-goo-eyed introduction, nurses a major crush on the oblivious Zach. He, however, is preoccupied with Amy (Annabelle Comes Home’s Madison Wiseman.)

There is some small familial discord when Zach is told his cancer has become terminal. His mother, Laura (Neve Campbell), takes him to France (and presumably Lourdes), but Kara Holden’s script is careful to avoid religious specifics. His dad, Rob (That Thing You Do’s Thomas Everett Scott; the Tom Hanks film gets a nod during the opening scene), buys Zach a car without consulting his wife.

Too sanitised for most real-life adolescents and too meandering at two-hours-plus, it’s a family film. But what kind of family will watch it?

‘My apartheid-era charge sheet has Charlie Haughey as my ethnic tribal chief!’
8

Who will win the International Dublin Literary Award 2020
10