Fighting for affection at the Edinburgh Fringe 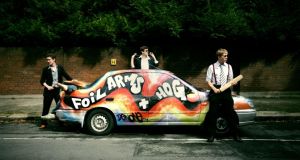 IT’S the 6 am flight from Dublin to Edinburgh, packed with tired comedians ill used to arising before 12. A lot of us are suffering from long-term exhaustion, having spent two sleepless months figuring out how to bridge the gap between our 25-minute club set and our 50-minute Edinburgh show. If this thing crashes, one of the emotions will be relief.

The distinction between a comic’s “club set” and their “show” is huge. The expectation from Fringe audiences is that you’ll have a 60-minute narrative, packed with well-versed gags, that not only entertains the audience but makes them think. In comedy clubs, people don’t want to know too much about the thinking bit. They want the funny man to make them laugh, so they don’t have to talk to one another for a while. For most of us, our “show” is all of our best jokes tied together with a narrative that’s as thin as the dividing walls between rooms at the Fringe venue.

Our room this year is an 185-seater with air conditioning. That last part of that sentence is not something you take for granted at the Fringe. We’ve performed in rooms that were hotter than lava-flavoured Pop Tarts. It’s also a cave - with thick stone walls - so we don’t have to work loud sound cues from other shows into our material.

It’s amazing how expectations of this festival can change. The first year we went over, we carefully packed our brand new suits for the “inevitable” award ceremony. Now, five years later, we pack extra socks, fewer condoms and more vitamins. We are excited but realistic, setting our sights on putting on a funny show with new material that will see us through the year and selling a decent amount of tickets in the process.

Getting people in the door is by far the most difficult thing to crack at Edinburgh. With over 3000 shows, you need to work hard and spend lots of money to sell tickets. Most people give out complimentary and two-for-one tickets early in the run, in an effort to build momentum. Unfortunately, some shows are destined for failure before they begin; bad venues and poor time slots are commonplace. Once, on the way home from a party, I met a cast of actors handing out flyers for a production of Hamlet that started at 9 am.

Flyering is the most effective marketing technique, but you still need a usp. When convincing people to come to our show, I’ve tried “five-star comedy”, “Irish comedy show”, and “recommended by The Irish Times” (it wasn’t). But by far our most effective flyering slogan is “If you don’t laugh, I’ll buy you a pint”. Stapling a five star review (real or not) to your flyer also helps.

After five Edinburgh fringes, we have received every different type of review: the good, the ridiculous, and the very, very bad. The disparity in quality control and the subjective tastes of comedy reviewers combine to give a performer absolutely no idea what to expect as they furiously Google their name the day after the show. On one occasion last year we received a five- star and a two- star review for the very same show - which is one reason why we don’t read them any more.

Another reason is that lines from bad reviews can haunt you for years. I’ll be doing the washing up, or having a pint with my mates, when I’ll suddenly remember that opening line from a 2010 review which read: “Do you think shouting is funny?”

Our show this year has an eclectic mix of sketch styles, with satires, character-based scenes, songs and audience interaction, enough to keep audiences on their toes over the hour. It will be fully ready by opening night, having ironed out all of the unknown references (apparently no one outside Ireland uses the phrase “sliced pan”), and balanced the pacing so there’s no audience “energy dip”.

Audience interaction is a great way of injecting energy into a show. It also adds that element of unpredictability. In our 2012 fringe show we had a sketch that developed into a Mexican gang fight. Each night we would take a man and his wife on stage and make the man fight for his woman’s affections using pushy-inny knives and lots of coercion. One night we had a middle-aged Glaswegian couple. Just as the fight was about to break out, the man, obviously expecting lots of physical contact, paused, and in front of the entire audience, popped about his false teeth.

The flight attendant has finished the demonstration now (he didn’t really commit to the role: two stars) I lash in the earplugs and try to relax. Like the night before the Leaving Cert starts, there’s nothing you can about it now laddie.

Foil Arms and Hog are playing the Edinburgh Fringe Festival from 31st - 24th August at 10pm at the Underbelly on Cowgate.