Festival in a Van: Bringing live performance to your door in a Covid-safe fashion 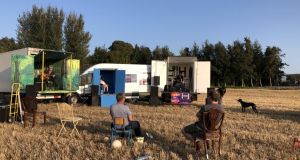 Festival in a Van per forms for the small audience in an outdoor setting. Photograph: Michael O’Rourke

In many ways, trying to organise events in 2020 is like being in a very bad relationship. You keep hoping and dreaming, you keep making dates. And over and over again they get cancelled. The love is driven online, but Tinder it ain’t, and the live events industry is in tatters.

Meanwhile, the absence of live performance has eradicated those small (and larger) moments of joy, and the surprise of being moved outside yourself.

Back in April, when I was writing a piece for this newspaper on shutting down a festival, the lighting technicians, stage builders, production managers, event organisers and rubbish collectors were a beguiling combination of philosophical and optimistic.

“We’ll be back,” was the collective thread of their belief. But over the following weeks, it also became increasingly obvious that nothing was going to happen any time soon, and we needed something different.

Living down the country, I was a bit short of both balconies and opera singers, but an idea came

During lockdown and throughout the cautious waves of reopening, a focus on “getting back to normal” has come between us and creating something new. A reason, besides the obvious one of Covid-19, is language. That word “normal” isn’t helping. If we had a different name for the times we’re in, we might be emboldened to come up with different ways of seeing it.

Instead of the swampy quagmire of waiting for the old world to return, if we saw ourselves as living in the meantime, or maybe in the difference, who knows what may emerge?

Art at your door

All this was running through my mind in the early days of lockdown, as social media feeds showed clips of Italians serenading one other operatically from their balconies. Living down the country, I was a bit short of both balconies and opera singers, but an idea came: what if a fleet of vans were to drive around Ireland, their doors opening as they drew up to houses, apartments, estates or care homes.

And what if inside was a musician, a singer, a story teller? Three vans could meet for a trad session to be viewed from your window or front step. Art could come safely, to your door.

I began thinking of cellists, of Shakespeare soliloquies (I am a little obsessed with Emily St John Mandel’s prescient pandemic novel, Station 11), arias, poetry and more. I imagined a Transit van touring housing estates like a cultural ice cream van. I found it hard to sleep.

As everyone who became obsessed with sourdough, gardening or another new enthusiasm during lockdown will attest, there were periods, particularly early on, of huge energy.

Festival in a Van is about finding ways to make protected space for those moments, that sense of connection, that art and culture are so deft at bringing

Having had the idea for vans carrying culture, it was a short mental step to Festival in a Van, and so, just over four months later, on a recent Sunday in Carlow, seven of us and one dog gathered in a stubble field, to see how three vans might work to stage a mini mobile festival.

In the intervening period, Creative Ireland had come on board with vital support, and the project was also backed by Galway 2020, together with Kerry, Limerick and Monaghan County Councils. Vans were hired, sets were built, sound and lights checked out.

We pondered the problems of wind and rain, and dreamed up itineraries to care homes, schools and National Parks. We got a van and smothered it in logos. The van broke down, the van was fixed. And on that sunny Sunday, it all came together.

Fin Furey and Michael Flemming did the musical honours (finfureymusic.com to get a taster), and we discovered you can fit a full drum kit in the back of a van. It sounds pretty damn good too. Out came the sound gear, as the dog nosed around for snacks and, all of a sudden, there was that feeling that I don’t think any of us had had since March: of a moment being made.

Ok, so it wasn’t the Electric Picnic – seven people vs the Picnic’s planned 70,000 but, oddly, the sense was the same. The frisson of live performance isn’t always a question of numbers. Size seldom truly matters. Keeping our social distance, we worked out sightlines, acoustics and when it would be time to break for tea.

Alongside the crew, many of whom hadn’t worked since spring, there have been pages of Covid safety documents, put together by Slua Event Safety, who are project partners and make rigorous standards of safety seem wonderfully achievable (slua.ie). There have been delays.

The Golf Dinner changed the environment for trying to create safe fun. The garbled messages from Government about events, both outdoor and inside, have made planning a nightmare, and added to everyone’s anxieties about creating safe craic.

And that’s the thing: Festival in a Van isn’t about the exceptionalism that makes some people think it’s ok to go to a golf dinner/Venice/house party, just so long as everyone else doesn’t do it. Instead, it’s about finding ways to make protected space for those moments, that sense of connection, that art and culture are so deft at bringing, and to do it in a secure way that is shared as broadly as possible.

In fact, another interesting casualty of Covid has been sharing. In the early days of getting Festival in a Van off the ground, Cork Midsummer cleverly programmed Corcadorca’s Contact, a pop up play for green spaces on housing estates. People wondered if we were dismayed that “someone had taken our idea”.

Aoife Dunne made a mobile digital art project with Fingal County Council, and Mobile Music Machine and the Blackwater Valley Opera Festival have been doing a brilliant series of Covid Care Concerts at residential homes. Again, we were asked if we minded.

How could we? Right now, we need more. And more and more. We need to share ideas, to put them out in to the world, even before they’re fully formed, to risk them in order to try to come together to create what comes next. And the most important thing to realise is that, while institutions and organisations are there to help, change won’t come unless individuals get involved. New ideas will come from people, and then the institutions may support them. We are all the architects of what happens next.

And as for Festival in a Van: we have three vans. At time of writing, we are just about to head on a tour of Galway, city and county, with The Whileaways, The Barceló Brothers, Orla McGovern and Niceol Blue for Galway 2020. Then it’s on to Limerick for Éigse Michael Hartnett to create a stage for Stephen Murphy, Micheál Rowsome and Trevor Sexton. After that, it’s Kerry, with a programme that includes acclaimed opera singer Gavan Ring, singer and harpist Marina Cassidy, and Afro Trad. Then it’s Carlow, Cavan and Monaghan.

Plus we’re working on a programme of excerpts from Romeo and Juliet for schools – imagine the balcony scene played between two vans!

What happens if we end up in full lockdown again? That’s exactly what the vans are there for. Maybe they can come to a town near you.