Death is real and terrifying but facing it head on is hard. Horror fiction gave me a way in 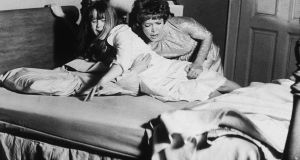 The first ever horror film I saw was The Masque of the Red Death, although I use the term “horror” with a certain degree of prudence. It was part of a BBC double bill. I had giddy expectations that swirled around the term horror, and all the grisly connotations conjured by the word.

I watched the film with some degree of bemusement because it bore no relation to the horror movies I’d heard about. Some boys in school had seen proper horror movies. Movies with people’s heads exploding, eyeballs popping from sockets, and masked killers murdering high school teenagers. They would talk breathlessly about the most gruesome moments. “The alien burst out of his stomach, and there was blood everywhere!” or “His stomach opened up and became teeth, and it bit off the other man’s arms, and there was blood everywhere!”

This kind of excitement reached its communal apotheosis when Today Tonight aired a programme about so called video nasties. It seemed that everyone in school saw it and we all revelled in the descriptions the next day. Driller Killer was a particular favourite. “He took the drill and drilled into yer man’s head” and yes, of course “there was blood everywhere”. We didn’t care about the moral panic. We wanted to see more of these banned videos, and thanks to the grand old tradition of older brothers passing down forbidden material some of us already had.

Some people in school had even seen Evil Dead. This was great because not only was Evil Dead a notorious horror movie, rumour had it that you could become possessed just by watching it. Our Catholic education had a lot to answer for. A priest complained in the national papers about RTÉ broadcasting The Omen. He feared it would leave people open to possession. We imagined the excitement of looking at a movie that left our immortal souls open to damnation.

The fear of the unknown was everywhere. The Sunday World ran a feature about an alleged possession in America. A few of my classmates sat enthralled as I recounted some of the more lurid details to them, including the moment when someone had walked into their bedroom to encounter a wizened, cloven-hoofed stranger sitting on their bed. The stranger pointed a clawed finger at them and intoned in a demonic raspy voice: “You’re doomed.”

You’re doomed, he said, and that was the nub of the matter.

Horror as a genre is often compared to a thrill ride, the fictional equivalent of a fairground attraction, but when it’s done well it does so much more. I started reading Stephen King as a teenager. At first I just wanted the thrill of being scared, but when we expect to be scared it begs the question: what are we really looking for?

I think there comes a point in every teenager’s life where they finally become aware of the brute reality of death. One day you’re hit with the realisation that your existence is finite. It can be an overwhelming thing to grapple with, but I think horror fiction allows you to explore it vicariously because if there’s one thing all horror fiction shares it’s the examination of the negation of the self, the sense that the void is coming, and it’s coming for you.

In essence horror fiction tells you one immutable truth.

The other great advantage with Stephen King was the fact that his books were so much more frightening than film. The Driller Killers of the world had nothing on the dread that King and some of his contemporaries could summon with just the right images. The reader’s wild imagination did the rest. Authors like James Herbert pushed it to the edge with nightmare set pieces such as the moment in The Fog when a town’s whole population drown themselves in the sea. In In the Hills, The Cities Clive Barker wrote a story about two Yugoslavian villages engaging in an annual wrestling match which involved them tying each man, woman, and child into the shape of two warring giants. The result was death on a grand scale, inducing chaos and collective madness.

Death was always the common denominator in stories like this, and reading them was like safely and vicariously experiencing some of the limits of human feeling and experience. In reading them I was navigating the boundaries and contours of an abstraction. Yes, death was real and terrifying, but confronting the idea head on wasn’t easy. Horror fiction allowed me a way in.

The townsfolk of Salem’s Lot for example all eventually succumbed to vampires, and yet their deaths were so much more than just physical. They died, but then returned, hollowed out, inhuman and constantly hungry. They became something between life and death that seemed somehow more dreadful than your average existential annihilation. It was a fantastical concept, but there was an emotional truth to it, a fear that everyone shared.

It also helped that Stephen King was writing about small towns in America. These same towns were as familiar to me as the town I grew up in. They had pharmacists, teachers, policemen and priests, and despite the way they spoke they all seemed familiar and real to me. In Salem’s Lot we briefly meet a realtor called Larry Crockett, a clearly avaricious and vulgar man, but to me a recognisable type from Irish society.

In recent years I returned to King and read Under the Dome in which the stand-out character is Big Jim Rennie, second selectman in the town of Chester’s Mill, owner of a car dealership, a man who has worked his way into every section of society for his own personal gain. The confluence of business interests and political manoeuvring in Big Jim’s life was so glaringly familiar he could have been dropped into any small town in Ireland and fitted right in.

I haven’t read much horror fiction since my teenage years. I drifted away but looking back I realise now that some of the better writers like King managed to explore things like the self and society, and what happens when one or both begin to crumble. Sometimes horror fiction can be so much more than mere penny dreadfuls. These stories can tell us things about ourselves, although first and foremost they should frighten us. There’s nothing like a cheap scare. Which reminds me. Lean in. I need to whisper this.

Always remember one thing. Never forget it. Just one thing.

You’re doomed.
The Monsters of Rookhaven by Pádraig Kenny, illustrarted by Edward Bettison, is published by Macmillan Children’s Books, at £12.99