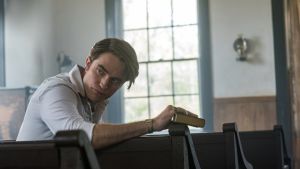 The Devil All The Time: Robert Pattinson as Preston Teagardin. Photograph: Glen Wilson/Netflix

Film Title: The Devil all the Time

The temptation to begin with a hog-tied parody of Southern Gothic tropes is close to overwhelming. Simple Benny done gone and drowned the one-legged general in the creek and called all God’s righteous anger on the unmarried sisters of Little Leghorn. You know how it goes.

Just consider the plot(s) of Netflix’s latest prestige feature. Brandishing his Bible with an unhinged vigour that might embarrass Amos Starkadder of Cold Comfort Farm, Robert Pattinson plays a preacher with more passion for tender flesh than the saving of souls. He comes across like an Elvis who got hooked on wrong bits of Revelation before hearing Little Richard.

Oh, talking of Elvis, here’s Riley Keough, the great man’s granddaughter, as a twisted young woman who, in the company of her even more deranged husband (Jason Clarke), lures young men into her car, shoots them dead and allows herself to be photographed naked before their stiffening bodies.

There’s a lot more where that came from. Hound dogs get crucified. Religious maniacs crazier even than the Reverend Pattinson murder women in the expectation of their imminent resurrection.

Shot in beautiful, damp shades by Lol Crowley, scored to spiffing contemporaneous pop songs (though none by grandpappy Elvis), The Devil all the Time – that title alone! – could easily generate its own Southern Gothic theme park. Enjoy chitlins on a stick with your transgressive religiosity. The film is set in a place called Knockemstiff, for Dixie’s sake. We wouldn’t risk that in the parody we promised not to attempt.

The odd thing here is that Donald Ray Pollock’s source novel is not technically set in the south. The real Knockemstiff is in a stretch of Ohio that leans towards Kentucky, but is still officially in the middle west. As if things weren’t already strange enough.

Antonio Campos, director of Simon Killer and Christine, two differently grim projects, moves into a different register. Even worse things happen than in his earlier work, but the tone is so heightened here that few viewers will leave The Devil all the Time in any state of existential despair. Though apparently based on Pollock’s own experiences (can this really be so?), the picture comes across as a clutter of yarns told to thrill gullible visitors on the porch of a roadside inn.

The fractured nature of the narrative ultimately becomes frustrating. The characters struggle to develop personalities beyond their collective, God-driven psychosis. But the delicious spiciness of the gumbo (or whatever the midwestern equivalent might be) will keep even the driest sceptic awake.

The picture takes us from the second World War to the conflict in Vietnam. We begin out catalogue of chaos with young Arvin Russell. Played by Tom Holland as an adult, the Knockemstiff local suffers PTSD in the Pacific Campaign that leads to a greater breakdown when illness hits the family and warps his religious faith. Who could tell? The Devil all the Time is so loaded with mania that Arvin hardly stands out from the crowd. So much public civility fails to conceal so much private depravity. Pattinson arrives to spread ill-will and lusty genes. Keough and Clarke are out there harvesting drifters.

There is an argument here about the corrupting influence of religion on ordinary Americans, but it is made with such bellowing cacophony that tinnitus ends up blurring the syntax. Don’t come for sociology. Come for top actors enjoying a weekend off the leash. Just look who’s in this thing. Robert Pattinson, Tom Holland, Bill Skarsgård, Mia Wasikowska? How often do you get to see The Batman, Spider-Man, Pennywise, Sebastian Stan, the Winter Soldier and Alice wandering about the same viscera-drenched neighbourhood?

This will have eyes upon it.

Streams on Netflix from September 16th

Bram Stoker Festival: 'People want something that is fun and light-hearted'
9