Eva Rothschild: What are you looking at?

Whether it’s by leaving a group of boys to explore her sculptures or by using a huge range of materials and processes, the Dublin-born artist Eva Rothschild likes to make people question what they’re seeing 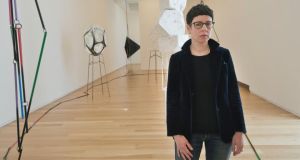 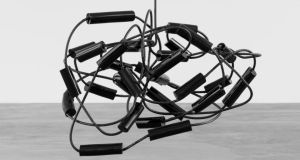 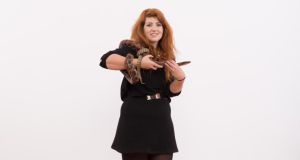 In 2012 Eva Rothschild made a film she’d had on her mind for years. It involved leaving a group of 11 boys unsupervised at an exhibition of her sculpture at the Whitechapel Gallery in London. With the camera rolling, the adults disappeared. The boys had been invited to look at the work and, if need be, to explore it through touch. “Apart from that,” she says, “all I said was that they would not get into trouble.”

So, to recap on the plan so far: leave a roomful of boys in the midst of a collection of abstract sculpture with an assurance that they are not going to get into trouble. What could possibly go wrong? Rothschild sort of smiles. She is the mother of three boys. “I’d no idea what would happen, though,” she says.

The video, Boys and Sculpture, forms part of her new exhibition at Dublin City Gallery the Hugh Lane. At first nothing much does happen. The boys explore the spaces and the pieces, cluster together and wander separately – but with a wild, skittish energy.

Rothschild’s work is abstract, and it’s a bit challenging. As she puts it, she likes a viewer to look at her work and think, What am I seeing here? There are references to natural and geometric forms, but in the end she aims to “set up ambiguities”. That’s tricky, but something else does come across, which is that her work is meticulously made. Her spiky, sinuously linear and blanket-like forms are all very precisely articulated, with gorgeous surfaces.

The boys make few concessions to aesthetics, however. Before long they see the sculptures as a challenge, a challenge in a rough, physical sense. In other words they effortlessly conform to gender stereotypes. “Really they dismantle the show,” Rothschild says, politely. Essentially she set up a controlled experiment and stood back to see what happened. She is fascinated but not appalled. She could well be appalled. Instead the experiment is now part of her work.

Rothschild established herself in an art world that is tough and still predominantly male. There is a certain toughness to her, a professional toughness, that has probably been essential to her success. She clearly knew what she was doing in setting up Boys and Sculpture. “There is this assumption of making the world that boys just have. I’ve seen that throughout my life. If you look at a group of sculpture students, even, the men will roll up their sleeves and say, ‘Where’s the skip?’ ” She smiles as she says this, but she’s serious.

Leaving Ireland She grew up in Dublin but has lived away from the city since before she was out of her teens. After a year at the National College of Art and Design she went to Belfast to study. She looks almost apologetic about that. “It sounds slightly as if I had a difficult childhood or something to get away from, but nothing could be further from the truth. I just had this strange feeling that it was time to move away.” Belfast was good, she reckons, but Glasgow, where she went next, was decisive. “Glasgow was fantastic.”

She found herself in the midst of a seriously challenging peer group of young artists. “There was a sense of scale, and ambition, of possibility. That was the most striking thing, that you don’t wait for permission, you just take the opportunity to do what you want to do.”

There is a downside to that, which she is too modest to mention. You can promise but not deliver. She has always more than risen to the challenge. “There are times,” she says, “when I’m terrified. When I take on something and I think, How am I going to do that?”

Broadly speaking, she can be counted among a number of female sculptors who have inherited and transformed a heroic male tradition of monumental, minimalist art. This comes across in the way that her work occupies a space. Rather than simply placing a huge, monolithic form in a room, say, she sets about engaging with the architectural character of the space.

Tate Britain Selected for Tate Britain’s Duveens Commission in 2009, she devised an angular, linear network that seemed to trace a soaring, acrobatic path through more than 70m of the grand neoclassical galleries. It explored and energised the vast space without setting out to dominate it.

One of the reasons she was not too put out about the boys’ “dismantling” of her sculptures is that she has often done the same thing. Several site-specific works have of necessity been recycled. Often her pieces are conspicuously constructed, spread out over large areas.

“I use segmentation a lot, building something from repeated units, so that there’s almost a suggestion that they can be taken apart,” Rothschild says. “In a way I never think of a piece as a unified whole. It could always come apart. In the finished product the material is still open to transformation.”

She wants to be the one who transforms it, however, despite what happens in Boys and Sculpture. “In any particular instance what I do is still formal and tight; that’s the way it should be in that space. I see it this way: there are always different possibilities of manifesting one idea, a bit like a ghostly presence that materialises in different ways. I like the notion of seeing the work as a manifestation that appears and then disappears, from place to place.”

Although she is extremely attentive to surface, it’s not about texture per se. “I don’t want people to touch the work. For me it relates to the eye, how the eye moves over the surface, and I don’t mean how we read an image. I mean being with the presence of the object in the space. We’re more and more remote from the material world in contemporary culture. We just take it for granted.”

Her response to this is not to simply emphasise materiality – that could well lead her to make big, monolithic blocks. She wants to make works that have a “tricked materiality”. She wants us to look and then question what we are looking at. So the forms she creates are anarchic and unpredictable; they can take off and occupy spaces in unexpected, unorthodox ways; they can be playful and almost familiar in referencing nature, but also slightly ominous and alien.

Rothschild is not a conceptual artist but one who still makes things, in a studio, close to where she lives, in the northeast London borough of Hackney. “I have a big, messy studio with lots of stuff in it. It’s a workshop, not one of those boutique studios you see in magazines.”

She uses a huge range of materials and processes, “mostly classical ‘making materials’, like aluminium, plaster bandage, patent leather, spray paint”. But one material, a gypsum-based acrylic resin called Jesmonite, seems to play a crucial role. “It’s an incredibly versatile composite material. You can cast it and laminate it. It can resemble lots of other things.”

It’s ideal for Rothschild because it’s impossible to pin down: it doesn’t have an essential, core identity. Just the thing to make us wonder what we’re really looking at.