Doctor Who: Jodie Whittaker will be the first female Doctor

The lead role in the BBC sci-fi series 'Doctor Who' will be played by a woman for the first time in its 50-year history. Jodie Whittaker, who starred in the award-winning crime drama series 'Broadchurch' will play the 13th doctor. Video: BBC 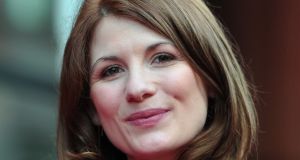 Jodie Whittaker will become the first woman to play the Time Lord in Doctor Who, the BBC has revealed. File photograph: Anthony Devlin/PA Wire

Broadchurch star Jodie Whittaker will become the first female Doctor in Doctor Who, the BBC has announced.

The actress (35), will take over from Peter Capaldi as the 13th reincarnation of the Time Lord.

Capaldi, who first stepped into the Tardis in 2013, will be seen for the last time by viewers in the 2017 Christmas special.

His departure coincides with that of the show’s longtime lead writer and executive producer, Steven Moffat, who announced he was quitting in 2016.

Whittaker, who has starred in all three series of Bafta-award winning Broadchurch as Beth Latimer, will team up with the drama’s creator Chris Chibnall as he takes over from Moffat as executive producer.

The announcement was made on BBC One following Roger Federer’s win over Marin Cilic in the Wimbledon men’s final.

The clip, also posted on Twitter by the official Doctor Who account, showed a cloaked Whittaker approaching the Tardis in a leafy forest and opened her hand to reveal a key.

Who is Jodie Whittaker?

Most widely known for her starring role as the mother of murdered Danny Latimer in Broadchurch, Yorkshire-born actress Jodie Whittaker has become the first female to take the lead role in Doctor Who.

Adept at performing as a wide-ranging number of characters, she has portrayed Anne Hathaway’s best friend in One Day, an abused lover in the time-travel film Harmony and as Rupert Everett’s dappy blonde secretary in both St Trinian’s films.

Born in June 1982 in Huddersfield, Whittaker dreamed of becoming an actress as a teenager. After leaving school at 16, she completed a Btec in performing arts before attending Guildhall School of Music and Drama — where she was joined by Hayley Atwell and Michelle Dockery.

She also met her husband, American actor Christian Contreras, at Guildhall. They married in 2008 and welcomed their first child in 2015.

A keen footballer and squash player as a youngster, Whittaker is a huge cricket fan and her father was formerly president of Huddersfield Cricket League.

She left drama school in 2005 for a part in Storm at Shakespeare’s Globe theatre, and subsequently won her first film role in Venus (2006) alongside Peter O’Toole.

St Trinian’s with close friend Gemma Arterton and in Good alongside Lord Of The Rings star Viggo Mortensen followed before landing the role of Beth Latimer in Broadchurch.

Not one to flaunt her fame, Whittaker has previously spoken of her happiness of having a “chameleon face” as it means she is rarely recognised in the street. However, after taking on one of TV’s biggest roles, the 13th incarnation of the Time Lord should be prepared for that all to change.

The actress has most recently finished shooting Paddy Considine’s Journeyman, as well as new BBC drama series Trust Me.

Even if Biden becomes president, there’s no turning back
3

Psychiatrist in the Chair: Delving into the great mind of Anthony Clare
5