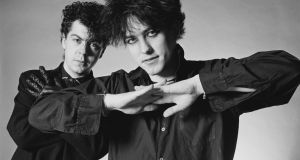 Lol Tolhurst (left) and Robert Smith (right) from The Cure pose together in London in January 1983. Photograph: Fin Costello/Redferns 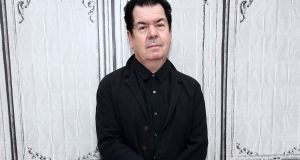 Considering The Cure sold more than 30 million albums, it was inevitable someone in their inner circle would eventually write a memoir to counter a slew of tacky cut-and-paste biogs.

Former keyboardist, drummer and founding member Lol Tolhurst has penned Cured: A Tale of Two Imaginary Boys; one of the most honest and moving music books of recent years. It candidly chronicles The Cure’s emergence from the grey gloom of Crawley in West Sussex during the Thatcher years to blossom into one of the biggest bands in the world.

Tolhurst began writing the book after singer Robert Smith claimed he didn’t feel up to the task.

“A few years ago, I asked Robert if he was ever going to write a book about the band,” Tolhurst recalls. “Robert joked that he might do a 16-page comic, but he didn’t have enough for a book. He never objected to me writing it because, while I know where the bodies are buried, I’m not going to sully the reputation of the band for the benefit of my own ego. I hate it when some memoirs and autobiographies turn into score-settling exercises.

“I gave Robert the first copy of Cured... last year. If there was anything at all in it he didn’t like, I’d have heard from him the very next day.”

Lol hasn’t always enjoyed such a good relationship with Smith, who fired Tolhurst from the band in 1989 during the recording of Disintegration. In 1994, Tolhurst sued The Cure and Fiction Records over royalties and joint ownership of their name. He lost the case, but relations healed enough over time to the extent that Tolhurst re-joined The Cure for a tour in 2011.

The same certainly couldn’t be said for one of Tolhurst’s 1980s contemporaries, The Smiths, who are still mired in acrimony over Mike Joyce’s court case, or New Order, who former bassist Peter Hook is reportedly suing.

“I think bands often forget the reason why they started in the first place,” Tolhurst says. “Alcoholism enabled me to reconcile, even though it has hurt me in so many other ways. Robert, Simon Gallup, Michael Dempsey and Porl Thompson are my teenage friends. Nobody else knows me like they do, and I still speak to them all on a very regular basis. The Cure are like family and we always come back together. Until the day I die, I will be associated with The Cure.

“When I read the Peter Hook and Morrissey’s books, especially the bit where Morrissey goes on and on about how much he hates Mike Joyce, I found it very sad because at one point I know they were living in each other’s pockets and shared so much joy over the years. They’ve kind of forgotten that.”

In addition to offering readers a glimpse into life with The Cure, Tolhurt’s memoir is a redemptive story about overcoming alcoholism and reconnecting with his estranged friends.

“After every single book event I do, I get at least one or two people coming up and telling me Cured... really helped them,” says Tolhurst. “This is incredibly flattering, obviously, but also very, very humbling. People need to be recognised. When I first became aware of my issues with alcohol, I just thought I was going mad. A music rehab facility in Detroit has made Cured... required reading, which totally blows my mind.

“In the last couple of days, I’ve been reading about Adam Clayton talking about his own battles with alcohol. It’s very healthy that this stuff is coming out into the open. People are starting to recognise that alcoholism is a disease that can occur regardless of how wealthy or well-known you are.”

Even though both U2 and The Cure soundtracked the 1980s, Tolhurst didn’t bump into Bono and company too often.

“We seemed to cross paths more with people like Madonna and Motley Crue,” Tolhurst laughs. “I became great drinking pals with Tommy Lee at one point, which probably wasn’t such a good idea. Our main connection to Ireland is that the very first song The Cure ever played together was Jailbreak by Thin Lizzy. We first toured Ireland in 1981. I remember playing the Trinity Ball in Dublin and driving around the bodies passed out on the street at six o’clock in the morning. Book tours are far more civilised because you’re finished around 8.30pm in the evening and you can go out for dinner. There’s no driving around Pittsburgh at two in the morning looking for something to eat.”

For the texting generation, “Lol” is an abbreviation for “laughing out loud”. Before the Brexit fallout forced him out of office, David Cameron confessed to thinking it stood for “lots of love”.

“I got a call from the BBC a few months ago on this very subject,” Tolhurst says. “A band did a homemade T-shirt and sent it to me with ‘LoL - I am the original LoL’ on it, which I love wearing. In America, it can get a bit too much. Sometimes, I just call myself Larry.”

Laurence ‘Larry’ Andrew Tolhurst plans to follow up Cured... with another memoir, while also working on a graphic novel and musical project with former Cure bandmate Porl Thompson.

“To me, it’s all art, whether it’s music or writing,” Tolhurst says. “I’m extremely fortunate to find something else I enjoy as much as music. Who knows what the future holds? If I’m lucky, maybe I’ve got another 20 or 30 years left, so we’ll see what happens. For me, realising in my late middle age that there is something else I can do with my life has been absolutely amazing.”