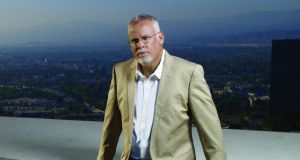 Michael Connelly: Renée Ballard, his new protagonist, understands that “if you go into darkness, the darkness goes into you”

The Late Show, Michael Connelly’s first novel to feature a new series character since Mickey Haller appeared in The Lincoln Lawyer, in 2005, opens with Renée Ballard and her partner, John Jenkins, taking a call to investigate credit-card fraud.

A mundane crime on the face of it, but par for the course: working “the late show”, which is to say the night shift, out of LA’s Hollywood division, Ballard and Jenkins generally turn up to crime scenes, write their reports, then hand over the cases to the day shift the following morning.

Connelly, however, is the creator of Harry Bosch, one of the most iconic protagonists in American crime fiction, and the deceptively routine opening quickly segues into a story that finds Ballard investigating the abduction and brutal assault of the transgender Ramona Ramone and a multiple shooting at a nightclub, during which a waitress, Cynthia Haddel, is murdered simply because she is a potential witness.

The names may have changed, then, but Connelly’s song remains essentially the same. The Late Show reads like a Bosch novel, as Connelly braids multiple investigations into his plot, driving the story onward with precise, measured prose that eschews sensationalism. Ballard, like the author, is a former journalist, whose training and experience had given her skills that helped with writing reports. “She wrote short, clear sentences that gave momentum to the narrative of the investigation.”

Where Bosch is a loner apart from his relationship with his daughter, Maddie, Ballard is a loner apart from her relationship with her grandmother Tutu. Sleeping on the beach, showering and changing at the station, Ballard lives a minimalist existence that allows her to dedicate herself to her work, believing that nothing should interfere with “the sacred bond that exists between homicide victims and the detectives who speak for them”.

Like Bosch, Ballard adheres to a Manichean philosophy: “big evil” exists in the world, and her job is to prevent the spread of its “callous malignancy”.

That said, Ballard is significantly more than a Bosch replacement or clone, at least for the time being. (Connelly will publish the 20th Harry Bosch novel, Two Kinds of Truth, this year.) An absorbing character on her own terms, Ballard is morally disciplined but irreverently free-spirited as she goes down those mean streets (the reference to Chandler’s The Long Goodbye is no coincidence), and although she may plough a lone furrow broadly familiar to fans of Philip Marlowe, Bosch or Haller, her gender allows Connelly to explore avenues closed off to his male protagonists.

Her experience of institutionalised misogyny in the ranks of the LAPD may have hardened the previously idealistic Ballard, but it has not shut down her instinctive emotional responses; if anything it has heightened her compassion for female victims of crime. Meanwhile, her sense of her own vulnerability and her attenuated awareness of possible threat, both of which feed into the story to a significant degree, are not qualities that Bosch or Haller – or very few male protagonists in crime fiction, for that matter – would be likely to admit to out loud.

Early in the novel Ballard notes that the murdered waitress was an aspiring actor who had played the part of “Girl at the Bar” in an episode of the TV show Bosch, “which Ballard knew was based on the exploits of a now-retired LAPD detective”. Bosch has been hanging on by his fingernails for some years, semi-retired and raging at the dying of the light, but it can only be a matter of time before Connelly puts the old warhorse out to grass.

That day may well provoke the kind of protests not witnessed since Arthur Conan Doyle tipped Sherlock Holmes off the Reichenbach Falls, but Connelly’s fans needn’t fret. In Renée Ballard, Connelly has created yet another potentially iconic tarnished knight of those perennially mean streets, a woman who understands, as her psychiatrist warns, that “if you go into darkness, the darkness goes into you”, but will stare defiantly down the abyss nonetheless.