David Rawle: ‘We don't appreciate how excellent kettles are’

‘Property of the State’ star on his favourite actor, film, album, social media account and more 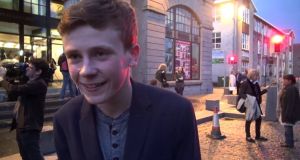 My favourite album is Johnny Cash’s American IV: The Man Comes Around, which was released towards the end of his career. There’s about five songs on this which are masterpieces and he totally revamped the covers he did.

I first heard him in the movie Logan. The trailer had his version of Hurt, and they featured The Man Comes Around at the end, and I didn’t leave the cinema until the song had finished. After that I became obsessed.

I’ve watched loads of documentaries about him and I’m in the middle of reading his biography.

My film of the year is Baby Driver – I saw it twice in the cinema. As soon as it came on, I thought “this is a David kind of movie”. And I just saw Blade Runner 2049. I didn’t love the first one as much as everyone else in the world seems to, so I went into the second one hoping it would be okay, and it turned out to be extraordinary.

I’m bad at watching TV, especially Netflix – I’ve never binge-watched anything. But I recently recorded Electric Dreams, where every episode is based on a Philip K Dick story, so I’m excited to watch that.

A good pair of headphones are essential. I used to have a pair of Beats but I lost them, which was devastating. I bought the ones I have now for €20 from an airport and they don’t even have a brand on them, but they have great, clear sound. There’s nothing worse than leaky earphones where one side stops working or you have to hold the wires to get the sound.

My other favourite gadget is a kettle. I don’t think we appreciate how excellent kettles are.

I enjoy the Empire podcast, it’s excellent. They geek out about movies, and when you’re listening to them, you feel like they’re in the room geeking out around you, and you just get to enjoy it. I especially liked the episode at the end of last year where they talked about the best movies of 2016, that was really insightful.

My favourite actor is Bryan Cranston. I love Breaking Bad, and all his other work too, even his smaller part in Drive is excellent. Every time he comes on screen it makes me happy, so if I hear he’s in a new movie, I’ll make my way to see it.

Watching him, I try to understand how he works and what makes him such a good actor. I read his autobiography A Life in Parts and little nuggets of wisdom he gives about his approach to acting are useful. He should be studied in very fine detail.

I went to [Donnacha Dennehy and Enda Walsh’s] The Second Violinist recently, which is part-play and part-opera. My sister saw it at the Galway Arts Festival and encouraged me to go and see it at the O’Reilly Theatre in Dublin.

Aaron Monaghan said two words at the beginning and at the end, but he didn’t need dialogue, it was a sensational performance. Plus there’s an opera going on at the same time, with a live orchestra, a conductor waving his arms around, and there’s a forest on top of the stage. You could watch any part of it and there would be something incredible going on.

It has to be Waterford Whispers News, the parody account. Their headlines could almost be real, and then you get to the last word and it’s something that changes the story completely and it always makes me laugh. They’re able to cut through the seriousness of a situation and call it for what it is. They’re really well-crafted stories, and they’re sharp people.

David Rawle appears in Property of the State, out now in cinemas nationwide.

Caught by the fuzz pedal: Gaz Coombes on his top Supergrass songs
10