Call Me By Your Name review: sun-dappled romance both delicious and sad 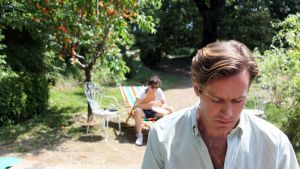 Film Title: Call Me by Your Name

What a wash of light. What a draft of colour. What dammed reservoirs of emotion. Luca Guadagnino’s sun-dappled romance just about deserves the extravagant praise that has been put its way since premiering at the Sundance Film Festival.

True, little new ground is broken. The film follows a young man as he allows an unexpected romance to wrap itself around him. Other coming-of-age stories have been there before. But there is an exotic urgency to Guadagino’s vision that sets the film apart. One could cynically wonder if the story would work if it were set in Athlone or Birmingham. But one shouldn’t.

Like Patricia Highsmith or Henry James, the filmmakers know that Europe does unexpected things to Americans. Proximity and desire act upon the heroes. So does the north-Italian sun, the vibrant culture and (more surprisingly) The Psychedelic Furs. Foreignness is a factor.

The picture is set in the last years when a certain class of glamorous, chiselled American man could still kick up admiration and fury just by existing. It is 1983 and Oliver, a historian, has arrived to stay with Perlman (Michael Stuhlbarg), a fellow American intellectual, and his French wife (Amira Casar) in their lovely, bleached villa.

Armie Hammer is just about the only upright actor who can still play Oliver. Brendan Fraser had it once. Rock Hudson and his contemporaries could carry the role off without disturbing a granule of dangling cigarette ash.

Oliver is confident to the point of arrogance, but he is so rapturously, unabashedly American – like Fanfare for the Common Man or the Chrysler Building – that nobody feels able to speak a word of criticism. He flops down on the bed upon arrival and smugly waves away invitations to dinner. He repeatedly speaks a curt “later” in place of “goodbye”. If it weren’t for memories of the Marshall Plan, nobody would put up with it.

Perlman is a very different class of foreigner: respectful, accommodating, unhurried. The host’s son Elio (Timothée Chalamet) is something else again. Fluent in all necessary languages, musically gifted, he seems equally at ease – and equally ill at ease – with the Americans and the Europeans. James Ivory’s subtle script, derived from a novel by André Aciman, slowly edges Elio and Oliver together. The first sign of attraction is the merest touch of exposed flesh. They talk a little about their shared Jewish heritage. They move in minutely small increments towards each other’s embrace.

There has been some criticism (a little from Ivory himself) concerning the film’s coyness about gay sex. Call Me By Your Name does sits in a very odd place. One peach-related sex act will forever colour readings of a key line from The Love Song of J Alfred Prufrock (come on, you can work it out). Elsewhere, the picture leans towards the tasteful heaving we expect from high-end soap opera.

Then again, Call Me By Your Name is a very tasteful exercise. This is one of those movie environments that admits only the intelligent, the well-dressed and the culturally sophisticated. Oliver’s dance to the  Furs’ Love My Way is treated as something of a vulgar joke. Elio’s proper place is before the keyboard, demonstrating different approaches to Bach. Elio rarely ventures out without one of the black-spined Penguin Classics that Ivory used to adapt with Ismail Merchant. We could hardly be further from the mud and viscera of Francis Lee’s more uninhibited God’s Own Country.

Fair enough. Guadagnino, the director of I Am Love and A Bigger Splash, tends towards emotional deflection. When the new film does rub against the sharpest feeling, it does so through a sober conversation carried out after the snows have come. The blow is no less powerful for being delivered behind a feint. Delicious and sad.