Culture shock: The best artistic stories that science has to tell

Welcome Disturbances, an exhibition of work from the UCD Science: Artists in Residence project explores the topic 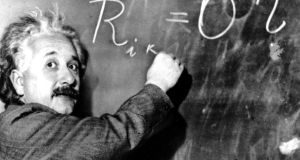 Once derided by Albert Einstein as “spooky action at a distance”, entanglement demonstrates how some particles are so deeply linked that observing one has an effect on the other, even though they may be separated widely. Photograph: AP Photo/File

Thousands of years ago people made up stories to explain the world. Myths describing the changing seasons often became dogma, morphing into religion. Fact, theory and story slid around one another, shaping an idea of what the world was, how it worked and what the meaning of life was.

More recently science nudged those belief systems aside – unless you happen to be a creationist – and enjoyed a brief interlude when everything seemed measurable, discoverable and explainable.

But it isn’t. The paradox is that the more we can observe, the more we discover that the sums don’t add up. Concepts such as dark matter, which can’t be seen or measured, have to be added to calculations to make them work.

These days string theory and quantum physics seem to occupy a similar space to the old myths. It does appear, at least to the amateur, that these branches of science offer stories that make sense of what can be seen but not (yet) proved.

Some of these ideas are almost romantically delicious. Take entanglement. Once derided by Einstein as “spooky action at a distance”, entanglement demonstrates how some particles are so deeply linked that observing one has an effect on the other, even though they may be separated widely. Imagine if that fact could form part of an explanation for some of our more inexplicable emotional reactions – including love.

On a perhaps more practical level, there’s the work of Benoit Mandelbrot, the Polish-born French mathematician who saw how fractal geometry creates the structure underpinning what may otherwise seem like chaos, and that even clouds and coastlines have an underlying degree of order. Arthur C Clarke, the science writer and author of 2001: A Space Odyssey, described the pretty patterns of fractals, generated by the Mandelbrot set, as “one of the most astonishing discoveries in the entire history of mathematics”.

With that, science and art, which in Leonardo da Vinci’s day were twin aspects of creative thinking, have come closer together again. It’s an idea worth bearing in mind during this week’s BT Young Scientist Exhibition. Each discipline is imaginative, creative, speculative, inventive and deals with discovering new ways of understanding and interpreting the world. Yet one is deemed useful, with Government initiatives promoting it, while the other is starved of funds, a luxury to be jettisoned when times are tough.

This attitude risks losing what art and science can bring to one another, and where collaborations and cross-disciplinary conversations can help to create new ways of thinking. Artists are eclectic gatherers of inspiration; those who have been drawn to science in Ireland include Cecily Brennan, whose Hero’s Engine (2005) uses the action of heat on water as a metaphor for pent-up emotion and the fragility of our bodies. Bea McMahon’s work has included aspects gleaned from her master’s studies in mathematical physics.

Then there’s Brian O’Doherty’s brilliant 1966 portrait of the art iconoclast Marcel Duchamp, which took the form of an electrocardiogram. As a result, Duchamp’s heart still beats in galleries and museums.

This idea of what constitutes the true essence of a person was picked up more recently by the British artist Marc Quinn, whose 2011 portrait of the geneticist Sir John Sulston sampled DNA from the scientist’s sperm.

In the UK the Wellcome Trust supports collaborations; in Ireland the Science Gallery, at Trinity College Dublin, hosts artists’ residencies and participates in EU projects aimed at bringing artists and scientists together.

At Trinity and at Yale University, in the US, medical students can opt for modules in art appreciation as a way of learning better observation skills and how to look beyond the obvious.

Since 2013 University College Dublin has hosted the Parity Studios in its department of physics; this artist-in-residence programme grew out of a collaboration between Emer O’Boyle, a graduate of the National College of Art and Design, and Lorraine Hanlon, a professor of astrophysics. These projects help break down barriers, including those arising from the specialist language of each discipline.

Alongside creativity, observation, experimentation and a restless quest for the new and the previously unthinkable, what art and science also share is an openness to failure. The best scientists will tell you that if a high percentage of your experiments aren’t failing, you’re doing the wrong experiments; you don’t make discoveries without thinking differently, sometimes dangerously so.

Perhaps the most useful thing that art can contribute to science is its uselessness – the space it demands for creative thinking where boundaries are nothing but things to be broken. Whether the Government thinks that’s something worth supporting is another matter entirely.

Welcome Disturbances, an exhibition of work from the UCD Science: Artists in Residence project, is at the Lab in Dublin from January 29th until April 2nd; thelab.ie

Ciara Kelly’s Isolation Diary: ‘The virus is outside the door, but we’re still ripping the p*** out of each other’
6

Lewis Capaldi: ‘I’m not Justin Bieber or Ed Sheeran – I’m not getting chased down the street’
8