Courtney Act: On My Cultural Radar

The reality TV star on her love of Balmain, Burning Man festival and Tiffany Haddish 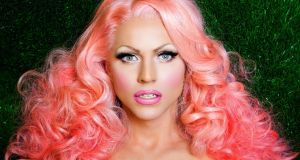 Courtney Act: “I was quite stoned, but Ricky Gervais blew my mind. I watched it again when I wasn’t stoned, and it wasn’t as mind-blowing, but it was still fascinating”

I’m reading The Sexual Life of Catherine M by Catherine Millet. It was a New York Times Bestseller, and it’s fascinating. She’s a very sexually liberated woman, and it’s a brilliant read about her life as a swinger. I’m also reading Tiffany Haddish’s The Last Black Unicorn, which is absolutely hysterical. She was an actress in Girls Trip, and it’s her autobiography. I’m not very far in, but I love her so much.

I’m vegan, so anywhere vegan is good. I’m not one of those recent adopters: even though I support anyone who’s vegan, I’ve been vegan for four years. The other day I had lunch in Yum Bun in Spitalfields Market, and they had miso glazed mushrooms bao, and it was bloody delicious. I have the app Happy Cow, which I use to find vegan restaurants, but I prefer it when there are good vegan options at regular restaurants – people might want to order food not because it’s vegan, but because it’s delicious.

Tiffany Haddish. She’s going to be in several answers, because she’s my favourite person at the moment. I could say Ricky Gervais as well. I haven’t seen The Office but I love watching his stand-up. I saw a video of him talking about atheism. Actually, I’d had an edible so I was quite stoned, but he blew my mind. I watched it again when I wasn’t stoned, and it wasn’t as mind-blowing, but it was still fascinating.

I’m so in love with Olivier Rousteing. He did all of Beyoncé’s outfits for Coachella and is the creative director for Balmain. I’m not one of those fashiony people who’s like “Oh, I love what Balmain’s doing”, but it’s sparkly, beaded, layered work, and all this opalescent stuff. Maybe it’s because I wore an opalescent outfit into the Big Brother house and now Balmain are doing it. I’m not saying I influenced it, but I’m not saying it’s impossible.

That’s Blackrock City, Nevada, which is Burning Man. It’s only there for one week a year, but it’s my favourite city. There’s no corporate involvement allowed at the festival, so it’s nice to go somewhere where there’s no mobile phones, no advertising and you don’t pay for anything, you just rely on the kindness of strangers. It’s a strange hippy utopian/dystopian society that only lasts for one week a year. More than a week and it would turn to anarchy.

As well as Tiffany Haddish, I think Meryl Streep is amazing. She’s so trustworthy in the roles she chooses and the way she delivers them. It’s not one of her high-brow ones, but The Devil Wears Prada was an amazing film.

I listen to Where Should We Begin? It’s a couples psychologist called Esther Perel, who records a three-hour session with couples. They edit it down into this 40-minute podcast, and it’s fascinating because normally you only hear one side of the story but here you hear both sides, plus a qualified professional mediating the whole interaction. Seeing a situation from all perspectives makes you realise people aren’t trying to be arseholes or rude. And it makes you understand that more communication and compassion will uncover the answers that everyone’s looking for a little bit quicker.

Chrissy Teigen (@chrissyteigen) comes to mind. She’s great on Twitter and Instagram. I didn’t know much about her or her husband, John Legend, but I stumbled across her posts and there’s an honesty and jovialness: she doesn’t take herself too seriously but she’s still a passionate person. Oh that’s awkward, I just went to her Twitter and I don’t even follow her. It makes me sound like a liar.

My favourite film is Girls Trip, with Jada Pinkett-Smith, Queen Latifah, Regina Hall and Tiffany Haddish. Sometimes when you watch a film, you don’t laugh out loud like you would in company. But I was by myself, and I had to pause the movie because I was laughing so much I kept missing the movie. Tiffany is just hysterical; it seems like she’s playing herself because she does it so naturally. She plays the friend that you want to be. But if she was your friend, you’d be embarrassed because she’s so off the wall.