Cormac Moore: A century of partition

The Act, brought in by David Lloyd George’s government in an attempt to address the Ulster question, caused great confusion and was widely condemned both north and south 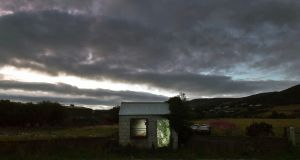 A former customs hut in Ravensdale, Co Louth, on the border between Ireland and Northern Ireland. Photograph: Charles McQuillan/Getty Images

The changes in Anglo-Irish relations from the introduction of the third Home Rule Bill in 1912 to the introduction of the fourth Home Rule Bill or Government of Ireland Bill in 1920 were profound. The intervening years had seen war, revolution and a dramatic swing in favour of full independence from Britain by a vast majority of the Irish public. In 1912, the British Liberal government was reliant on the Irish Parliamentary Party for support, leading to the third Home Rule Bill. By 1920, with Conservatives and unionists dominating the British government, addressing Ulster unionist concerns became paramount. The Government of Ireland Act 1920 was an attempt to address the Ulster question, and not the overall Irish question.

The genesis of the Bill came in the latter half of 1919 once the British prime minister, David Lloyd George, was no longer constrained from dealing with the Paris Peace Conference after the ending of the first World War, that took place for most of the first six months of the year. Home rule was still on the statute book since 1914 and could no longer be postponed. It was scheduled to come into operation automatically when hostilities were formally concluded with the signature of the last of the peace treaties. To stop the third Home Rule Bill from coming into effect by default, Lloyd George set up a committee chaired by Walter Long to draft the Government of Ireland Bill.

Once they have their own parliament with all the machinery of government and administration, I am afraid anything like subsequent union will be impossible

Long was a staunch unionist and rabidly anti-Sinn Féin. Unsurprisingly, the make-up of Long’s committee was unionist in outlook. There was no nationalist representation whatsoever nor were nationalists even consulted. James Craig and his associates were the only Irishmen consulted during the drafting of the Bill. The first meeting of Long’s committee decided to create distinct legislatures for Ulster and the southern provinces linked by a common Council of Ireland, comprising representatives from both. This was the first time that a separate parliament was proposed for Ulster, where unionists to date had shown nothing but unyielding advocacy to remain within Westminster.

The leading nationalist MP left in Westminster, Joseph Devlin, believed the creation of a parliament for Ulster would result in the “worst form of partition and, of course, permanent partition. Once they have their own parliament with all the machinery of government and administration, I am afraid anything like subsequent union will be impossible.” Edward Carson, who ideally wished for no home rule anywhere in Ireland, saw some attractions to an Ulster parliament, stating “Once it is granted . . . [it] cannot be interfered with. You cannot knock Parliaments up and down as you do a ball, and once you have planted them there, you cannot get rid of them.”

The proposed Council of Ireland would be composed of 20 members from each parliament. In the first year, it would look after transport, health, agriculture and similar matters, afterwards working towards unity of the country. It was envisaged that the council would lead to the peaceful evolution of a single parliament for all Ireland. A degree of unity within the central Irish administration headquartered in Dublin would be maintained through a common high court of appeal, railway policy and many other all-Ireland functions. Postal services were also to be reserved, to be administered by Westminster until they could be transferred to an all-Ireland assembly if Irish unity was realised.

Long’s committee also advocated that all of the nine counties of Ulster should be included in the Northern parliament. Ulster unionists were unhappy with this, seeking and being granted the six counties of Antrim, Armagh, Derry, Down, Fermanagh and Tyrone instead, and not the nine counties of Ulster as this was the maximum area they felt they could dominate without being “outbred” by Catholics. This stance was deeply unpopular amongst the 70,000 Protestants of counties Donegal, Cavan and Monaghan, who were sacrificed to the Southern administration.

Thomas Moles, Westminster MP, explained that the three counties had to be abandoned in order to save the six counties, saying: “In a sinking ship, with life-boats sufficient for only two-thirds of the ship’s company, were all to condemn themselves to death because all could not be saved?” Even though the Ulster Unionist Council endorsed the Government of Ireland Bill reluctantly, many Ulster unionists eventually “concluded that the scheme proposed in the Government of Ireland Act would cause the least diminution of their Britishness”.

A great deal of confusion surrounded the Government of Ireland Bill. The Freeman’s Journal described it as a complex problem considering, “The whole scheme of Irish administration is based on recognition of Ireland as a national entity with its centre in Dublin.” The newspaper deridingly named the bill “The Dismemberment of Ireland Bill”. The unionist-leaning Dublin Chamber of Commerce condemned the bill, saying partition would negatively affect banking by restricting the free flow of business. Many in the civil service were reluctant to move to Belfast, to uproot their families and homes, even in instances where their work solely related to the area that would become Northern Ireland. The breaking up of the Department of Agriculture was particularly bemoaned as it was seen as a great success since its formation 21 years earlier.

That the Government of Ireland Act came into law as Britain was at open war with Sinn Féin, which was supported by a considerable majority on the island, shows the total air of unreality that surrounded the Act

It has often been cited that the Government of Ireland Bill was allowed to pass relatively unchallenged due to the vacuum in nationalist representation at Westminster. There were just seven Irish nationalist MPs remaining in Westminster (six from Ireland and TP O’Connor from Liverpool) after the 1918 general election, instead of 80. It could be argued that even 80 nationalist MPs would have made little difference considering the make-up of the House of Commons after the election. The Conservative Party, Lloyd George’s coalition Liberal Party and Irish unionists won more than 500 seats, an overwhelming majority.

Sinn Féin, the leading nationalist movement after the 1918 general election, abstained from Westminster. It formed its own constituent assembly in January 1919, Dáil Éireann. It was not in the House of Commons to debate the Government of Ireland Bill. As the Bill was making its way through parliament, the British government was waging a war with Sinn Féin and its military wing, the Irish Volunteers (renamed the IRA). Sinn Féin leaders stuck steadfastly and naively to the view that Ulster would readily come into an all-Ireland parliament once Britain was removed from the island. That the Government of Ireland Act came into law as Britain was at open war with Sinn Féin, which was supported by a considerable majority on the island, shows the total air of unreality that surrounded the Act.

As the Bill was making its way through parliament for much of 1920, tensions in Ulster started to boil over. Violence that started in Derry spread to Belfast in the summer of 1920. Thousands of Catholic and socialist Protestant workers were expelled from shipyards and other places of work. Waves of violence, much of it sectarian in nature, engulfed Belfast from the summer of 1920 to the summer of 1922, leading to the violent deaths of just under 460 people.

It was in an atmosphere of war, sectarian hatred and boycotts that the Bill became an Act on December 23rd, 1920, and elections to the new parliaments were set for the following May. While the Government of Ireland Act 1920 formed the basis for the structures of Northern Ireland, it was practically ignored in the 26 counties, ultimately being superseded by the Anglo-Irish Treaty in December 1921.