Culture over the next week: Esker Festival Orchestra on its plans 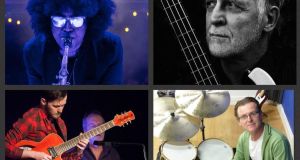 The confused and seemingly illogical new rules for live arts performances – and their disastrous communication – impinge hugely on the very limited rehearsals and events coming up.

Despite the various Government departments finally agreeing on basic capacities for indoor and outdoor live events – six and 15 people respectively, a Covid-19 restriction to help prevent the spread of the virus, in place until September 13th – the National Campaign for the Arts (NCFA), which has been leading the way through the wilderness for the sector, says many questions remain unanswered and there still isn’t clarity.

“The Irish arts and live events community have overcome enormous challenges and obstacles to reignite live experiences and events, to get people back to work, to give audiences a glimmer of hope in these dark times. Every moment that arts and events professionals spend devising, organising, managing, testing, and revising these events takes a heavy toll – financially, physically and mentally. The ‘on again, off again’ situation is unsustainable.” The NCFA asks why music venues are omitted, wondering what is the difference between a professionally managed, controlled, socially distanced, fully compliant event in a theatre and one in a music venue.

Hundreds of Irish arts organisations and groups, under pressure and at significant cost, pivoted to create outdoor programmes which will “now presumably be cancelled” or will need to be reimagined for a later indoor setting, at significantly reduced capacity.

Among those affected is Druid Theatre Co, now in rehearsal for DruidGregory, a series of outdoor performances at Lady Gregory’s Coole Park home and a 15-venue, four-week Co Galway (sold out) tour as part of Galway 2020. Both Dublin’s Fringe and Theatre Festival have outdoor and site-specific performances lined up, including the Abbey Theatre’s promenade performance of The Great Hunger in the grounds of the Irish Museum of Modern Art.

The Department of Arts is offering individual guidance for organisers seeking clarity on the Covid-19 restrictions although many artists and promoters are still unclear about how to proceed.

A sector that operates on lean budgets, with precarious work, which nonetheless has been both inventive in finding alternative ways to perform, and professional in managing it safely, has been treated shabbily.

It all sounds stressful and chaotic, and aside from last week’s shambles around the communication of the new temporary rules around performances, even some planned online events have suffered the fallout from the lack of clarity.

The Esker Festival Orchestra (EFO) late last week had to cancel plans for a recording of a performance in Cork City Hall next week, for streaming online, because of the most recent changes in Covid-19 restrictions. The original plan was for a live online Q&A on August 27th at 6.30pm and to rehearse, perform and record a programme of music for an online performance premiere on September 6th. The EFO is normally a week-long residential course and performance tour, gathering young professional musicians from Ireland and Europe, and the Covid-19 reinvention involves a reduced ensemble of less than 15, with previous soloists, tutors and former members of the EFO, including mezzo soprano Carolyn Holt as soloist, Hugh Murray (violin), Miriam Kazcor (flute), Yseult Cooper Stockdale (cello), and Ellen Jansson (piano), curated and conducted by EFO director Peter Joyce, an Irish conductor/composer/instrumentalist studying at the University of Music and Performing Arts in Vienna. He returned from Austria a few weeks ago to self-isolate for 14 days, as did some of the other musicians.

The Irish Association of Youth Orchestras is now hopeful of finding an alternative setting for the Q&A and recording, having since got guidance from the Department of Arts and Culture that the event comes under return to work protocols rather than performance, as the premiere is being filmed for an online stream. eskerfestivalorchestra.com

What is the collective noun for Guilfoyles? August 29th is 100 years since the birth of jazz hero Charlie Parker, and 20 years since Improvised Music Centre (IMC) released Ronan Guilfoyle’s Lingua Franca BIRD album of music associated with Parker – music written by him, jazz standards made famous by him and also original music dedicated to him. To celebrate, IMC is hosting a streamed performance of the BIRD album, featuring some of Ireland’s finest jazz musicians, for fans to enjoy safely at home. The 2000 album, with an international cast featuring saxophonist Julian Arguelles, guitarist Rick Peckham and drummer Tom Rainey, explored the classic Parker pieces, with “ingenious reworking of some classic tunes” according to the Journal of Music. The online concert will be recorded live at Arthur’s Blues and Jazz Club and released online on Saturday, August 29th at 8pm and keeping it in the family, the three Guilfoyles, or 3G (Ronan on bass, Conor on drums, Chris on guitar) will be joined by Chris Engel on saxophone to perform the entire BIRD album. Tickets €5 from improvisedmusic.ie

The Top Security Frank Maher Classical Music Awards, the largest such competition for secondary schools in the Republic, are going ahead, and with a €5,000 prize for the winner. Closing date for entries is September 11th. The awards are open to sixth-year post-primary students of string, woodwind, brass and piano with the top prize to be used for a purchase or for tuition in Ireland or abroad. Adjudicators select up to seven finalists who each receive a €300 bursary. There will be changes to the competition night on October 2nd at the Royal College of Physicians of Ireland in Kildare Street, Dublin to comply with Covid-19 restrictions and to ensure a safe environment for the finalists.

The Frank Maher Classical Music Awards were created in 2001 by Top Security chairman Emmet O’Rafferty to honour his late teacher, Fr Frank Maher, who nurtured musical talent in schools. O’Rafferty says “Life must go on and we believe it’s important to keep supporting young musical talent, now more than ever. From feedback, the Frank Maher Awards are not only a vital financial boost to the winner, but also securing a place in the finals itself is an important achievement to have when applying to music colleges and institutions.”

The online versions of Trailblazery events, for “for women who need inspiration, encouragement and connection” continues next week with Moon Medicine, Unearth Your Wild Woman, a live Zoom event (Tuesday, September 1st, 7pm) featuring “global women’s leader and spiritual provocateur” Ayesha Ophelia, hosted by Trailblazery founder Kathy Scott, with music by Victoria Priest from Tennessee. Ophelia, from Chattanooga, Tennessee, is the creator of online communities The Girlfriend Manifesto and Society of Wild Hearts and promotes “a strong sisterhood, spirituality, a radical self-love practice and adventure”. The online event is €25, with some discounted and free tickets. thetrailblazery.com