Loneliness of The Long-Distance Cartoonist: Adrian Tomine’s life and career

From neurotic younger days all the way to the present, still quite neurotic days 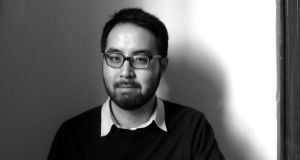 Adrian Tomine: ‘It’s a flaw of mine but, from an early age, part of me has always sought a sense of loneliness.’

Adrian Tomine has had a paradoxical time in isolation. “This lockdown is one of the first times I’ve really craved and missed the feeling of being alone” he tells me over Skype as we sit down to discuss his new graphic novel, The Loneliness of the Long-Distance Cartoonist.

Given the book’s title, and its recurring themes of self-doubt and alienation, it might seem odd that loneliness doesn’t appear to bother him very much at all.

“Nine times out of 10 it’s the opposite,” he says. “I think how lucky I am that my life turned out like this, that I get to do this as a job. There’s no place I’d rather be, but there’s the occasional day of feeling isolated. It’s different now because I live with my family, so it’s different from some of the experiences in this book where I lived alone.

“I’d gotten to the point where I was making a living from cartoons and it could feel like a prison. I had no way to meet new people and four or five days would pass where I hadn’t spoken to anyone. It’s a flaw of mine but, from an early age, part of me has always sought a sense of loneliness.”

The Loneliness of the Long-Distance Cartoonist charts Tomine’s life and career, from his neurotic younger days all the way to his present, still quite neurotic days. It does so via a series of short chapters titled with their time and place - San Diego, 1995; New York, 2011 etc. They’re placed within the text as short vignettes which may only last three or four pages but, taken together, trace a compelling, often hilarious, path through the ongoing humiliations of writing, drawing and promoting comics.

We first meet Tomine as an extremely nerdy child, cursed to have a love of comics at a time when such passions were decidedly less cool than today. His enthusiasm doesn’t mark him out as an arty scenester, but rather an unwilling recipient of wedgies, shoves and exclusion by his classmates.

“If you see the cast of The Avengers on talk shows now,” he laughs, “every single beautiful celebrity says, ‘oh, I was a real nerd’. There’s a part of me that reacts badly to that. That said, I did an interview where someone asked, ‘would you really have been attacked for liking comic books, even 30 years ago?’ And I clarified that it wasn’t just that I liked comic books – I was also obliviously rambling on and on, in this nerdy, brain-numbing way.”

Undaunted by such setbacks, Tomine swiftly emerged as a prodigy in the cartooning world. By the time we see him attend his first big conference in 1995, he’s scarcely in his 20s and his Optic Nerve mini-comics are already receiving raves.

His career since has included several collected editions of that series, dozens of iconic New Yorker illustrations, and standalone works like Shortcomings, Scenes from an Impending Marriage and Killing & Dying (the latter this paper’s choice for outstanding graphic novel in 2016). His clean lines, narrative restraint, and unshowy flair for emotional realism caused indie comics icon Daniel Clowes (Ghost World, Eightball) to call Tomine “the boy wonder of mini-comics” and led unkind critics to accuse him of being a mere copycat of Clowes himself.

All of these critiques – and several lines taken verbatim from one particularly scabrous review – make it into the book in vivid detail, including one interaction with a comics-loving nurse who comforts him through a medical emergency before turning down his offer of some signed books by saying, “I’ve seen your stuff and, like I said, I’m more of a manga fan”.

All of which raises the question of whether Tomine has learned to live with such criticism.

“Oh, I learned that lesson early in my life,” he says, his eyes rolling for added emphasis. “It’s more of a surprise if someone I don’t know comes up and says they like something. The humour in the book helps me put across that I don’t always take myself that seriously. If the nurse in the emergency room has helped me get through the worst night of my life, doesn’t like my work, I really don’t care.”

Although, he adds with something like sheepishness: “I am definitely known around the house for changing my opinion of another artist if they suddenly praise me.”

The book focuses on the less glamorous aspects of cartooning, granting us a front-row seat for desolate signings in the basements of small-town bookstores, and industry events at which our author receives withering putdowns from his artistic heroes. We join him on an excruciating “comics cruise” and, in one particularly memorable sequence, learn what eggs Benedict with extra hollandaise sauce will do to a lactose-intolerant cartoonist trying his best to impress a beguiling interviewer.

“It’s a hard act to balance,” he says, meaning his choice to include so much industry talk, not the dairy content of his meals. “To some people it might be a humble brag: ‘Oh the trials of success!’ But, at the same time, this might be useful information for aspiring cartoonists, especially now as there’s more of an industry; the thought that making comics could lead to wealth or fame was inconceivable when I started out, unless you were Charles Schultz or anything.”

As a fourth-generation Japanese-American, Tomine (pronounced toe-meen-ah, as almost no one in the book manages to grasp) also grapples with less savoury treatment he’s received from his industry: being mistaken for an IT worker by an older cartoonist; unprompted comment from an unnamed creative hero about his love of jiujitsu; and one gasp-inducing moment at an awards show when comics legend Frank Miller refuses to read out his surname during the nominations, out of an unwillingness to attempt its pronunciation.

“I have no gripes about people who can’t pronounce my name,” he assures me. “Why would they? It’s unusual, and the one time I’ve been to Japan I discovered I actually pronounce it wrong. But there is something slightly more aggressive if someone intentionally just skips over it.

“But comics is multigenerational. Every event involves some guy who’s 90 years old and a teenager who has a giant graphic novel out. I hope people see things like that as generational, rather than them being explicitly hateful”.

“I definitely hold more grudges about the party sequences and the San Diego cons,” he adds, referring to his recurring disappointments at the world’s largest comics convention, two of which feature in the book. “There were many, many more. I could have done a Groundhog Day, where at least 10 years in a row I’d say, ‘I’m never coming again’; and exactly one year later I’m on a plane to go through it all again”.

Real characters pop up throughout the book, including the aforementioned Frank Miller and Daniel Clowes, and fellow indie comics luminaries Seth and Richard Sala. Elsewhere, names are redacted with sharpie scribbles, preserving anonymity for their targets.

“I spent a lot of time wringing my hands about which names I should black out and which I should show,” he says. “There were some people I drew as close to life as possible and some I changed entirely. I think a lot of it was I didn’t want to be explicitly vindictive, or bring harm to anyone who might have made a comment that struck me the wrong way 30 years ago. I hope I made all the right calls, but if I failed it’s not from lack of thought.”

The result is a hilarious and occasionally heartbreaking memoir, that leaves you in no doubt that the main butt of Tomine’s most lacerating jokes is himself. But does he ever worry how it might come across to peers, or to his family members?

“Well, my older daughter, who’s 10 now, she read it while it was in progress – with particular interest in the pages where she appeared. My younger daughter may too, later on, and I’d be happy if she did. A lot of the book is an excuse to put down on paper some thoughts I might not feel comfortable saying directly. I like that.”

Even when it’s decrying your industry and wishing death on your creative rivals?