A Rose can now be gay or a mother, but must be 18-28, unmarried, female and of Irish origin 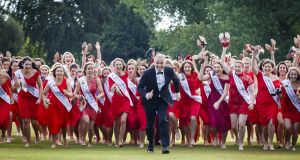 The Rose of Tralee rules are desperately unfair. An outrage.

Yeah, lining up girls and women to judge them by their appearance and charm is problematic and limiting. Yeah yeah, our understanding of gender roles – of what it is to be a woman, after centuries of patriarchy and double standards have shaped attitudes – has moved on.

Images of hordes of young women lined up in their finery and sashes with a sole middle-aged man at the centre is comically anachronistic.

But that’s not why it’s unfair.

We may have moved on, but there it is, twinkling in the background every August, part of what we are: the Rose of Tralee.

This year, with the festival cancelled for the first time in over six decades, instead we get highlights of Roses past and memorable moments from the quintessential Lovely Girls competition, mediated by the Lovely Boy Dáithí Ó Sé: a repackaging from the RTÉ storecupboard for pandemic times (Dáithí’s Decade of the Roses, RTÉ 1, Monday).

“The festival is all about the Roses,” he tells us, “that amazing crop of highly accomplished and amazingly talented women.” (Yes, the script used the word “crop”, but let’s not wince.)

Each year he introduces 32 Roses to the world, and here he selects some of the most entertaining bits from 10 years as host (that’s a mind-boggling 320 Roses), for a whistle-stop tour of amusing anecdotes about hamsters and gaffes and washing dentures, and the odd live marriage proposal on stage.

The Roses are terrific: funny smart, well able to play the audience.

All the same, watching it, there’s a Father Ted voice in the back of the head, opining “They all have lovely bottoms”.

In this concentrated essence of Rose, we see that Dáithí has, live on stage, attempted yoga, worn Kinky Boots, done Brazilian dances and science experiments, worn fake eyebrows, been a punchbag. Through it all he’s charming and funny and supportive and has a lovely blas, even when he’s talking Béarla. He is, clearly, A Good Sport.

And that’s what’s unfair, we realise. Dáithí Ó Sé is the perfect Lovely Boy. He’s not allowed to enter, not because he works for RTÉ or has an unfair advantage because he knows exactly what’s required.

They’ve loosened the rules so a Rose can now be gay or have a child, but they’re still obliged to be aged 18 to 28, unmarried, female and of Irish origin. God love him, Dáithí only meets one of the stipulations. It is desperately unfair.

When the Rose competition resumes next year, like everything else in our world it has the opportunity to reinvent itself as a better version.

They could make it equal opportunities and encourage boys to enter. And no, we wouldn’t call it the Tulip of Tralee.