Carrots with minds of their own? The weird theory of panpsychism

Unthinkable: A speculative hypothesis about the nature of consciousness has academics riled up 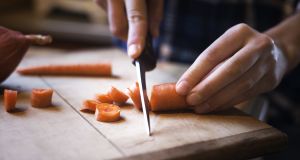 Mind the mind: According to panpsychists, consciousness is not exclusive to humans; it’s in rocks, carrots, molecules and anywhere else you can mention. Photograph: Getty Images

If you think philosophy is all about chin-stroking and the polite exchange of ideas then you haven’t been on Twitter lately. The social media platform, known for accentuating echo chambers, has brought two tribes into the open over the relatively abstruse issue of the nature of consciousness.

In one corner are the materialists who hold that consciousness is the result of physical states of our brain. This scientific tradition stands opposed to dualism, which maintains that mental states and physical states are distinct from one another – be it through a spirit, a “ghost in the machine”, or some other process.

The difficulty facing materialists is to show how specific combinations of brain activity produce your mental experiences, or what exactly causes your experience of “you”? This is what philosopher David Chalmers calls the “hard problem of consciousness”, a problem which has led to a revival in interest in panpsychism.

This theory holds that the mind exists throughout nature, or in other words, that “everything in nature possesses certain mental features”, Dr Ben White of Trinity College Dublin explains. “On the standard form of the view, even fundamental physical particles are in some sense conscious, although the form of consciousness they possess is far more primitive than our own.”

The theory sidesteps key objections to materialism and dualism as consciousness “doesn’t have to pop into existence” under panpsychism; it’s already there – in rocks and carrots and molecules and people.

But is there any evidence that it’s true?

“The data of neuroscience is neutral between materialism, dualism, and panpsychism,” author and panpsychist philosopher Philip Goff tweeted last month.

“This is probably the stupidest thing I have ever read,” replied celebrated neurophilosopher Patricia Churchland. “What about pixie dust? Leprechauns? Ghosts?” she added.

Thus began an almighty row that rumbles on weeks later as advocates of panpsychism accuse their opponents of narrow-mindedness and ideological bias. The materialists continue to needle by seeking scientific proof.

For this week’s Unthinkable column, The Irish Times called in Dr White, an assistant professor in philosophy who specialises in the mind-body problem, to act as referee.

This is probably the stupidest thing I have ever read. Amazing what philosophers can convince themselves of.
Is physics also neutral between these things? https://t.co/oxw8PpIonI

Not that an ultimate adjudication can necessarily be made. Chalmers himself has kept a toe in all three camps and has dabbled with some even more exotic theories, once quoting in exasperation the philosopher John Perry: “If you think about consciousness long enough, you either become a panpsychist or you go into administration.”

Is there any evidence that panpsychism true?
Ben White: “While it may sound odd to say that things like electrons have conscious experiences, panpsychists think that accepting this idea enables us to overcome certain philosophical difficulties that other, rival views about the relationship between consciousness and the physical world face.

“I know of no evidence that panpsychism is true, aside from the alleged fact that it does a better job of addressing these philosophical difficulties than its rivals.”

“So the fact, for example, that certain types of brain damage correlate with certain types of psychological deficits is by itself not evidence for materialism over dualism, as dualists can allow for such correlations as well.

“That said, one might see the track record of the physical sciences as lending empirical support to materialism, as in the past, whenever we have encountered some phenomenon in nature that seemed to defy physical explanation, further investigation has typically shown it to be fully explainable in physical terms.”

If you have to plump for one theory should you favour that which is testable? And does that give materialism an edge because any test will, by definition, measure a physical phenomenon?
“In general, we ought to favour theories that are testable – provided, of course, that they actually pass the tests we subject them to. The difficulty, however, is that there may sometimes be – indeed, on some views, there always are – different, incompatible theories that are equally consistent with all the available evidence, and which make the same predictions about the results of any test we’re able to perform.

“In such cases, since we can’t appeal to any empirical evidence to determine which theory we ought to adopt, the choice between them has to be made on the basis of more general considerations – for example, which is the simplest, the most fruitful in suggesting further lines of inquiry, or fits best with theories in other domains.

“As you might suspect, this situation often arises in philosophy, where the questions being debated cannot be straightforwardly settled through empirical tests.

“While it’s not so popular nowadays, it was once more common for philosophers to hold that theories that cannot be distinguished through testing in this way are either meaningless or else effectively just saying the same thing in different ways.

“I don’t think it’d be correct to say that the maxim to favour theories that are testable automatically favours materialism due to the fact that any test will, by definition, examine a physical phenomenon. For part of what’s at issue in the debate between materialists and their rivals is whether the phenomena involved in the observations that we make in conducting a test are indeed purely physical in nature – where ‘purely physical’ here means ‘non-mental’.

“Dualists might argue, for example, that while the measuring instrument or whatever that’s observed to determine the result of the test is itself physical, one’s observation of it involves various perceptual experiences that are themselves non-physical. And panpsychists will of course argue that even the measuring instrument or whatever that one observes is composed of particles that themselves have certain mental features that materialists deny they have.”

What, if any, theory do you favour?
“My sympathies lie with dualism, but materialism is a close second. I take the hard problem of consciousness very seriously, and materialist attempts to address it have thus far to my mind been inadequate. That said, I am also keenly sensitive to the difficulties that dualists face in accounting for the mind’s ability to cause physical effects.

“Although I think there are ways that dualists can address these issues, there are moments when I doubt the viability of these solutions, and then materialism seems the only attractive alternative.

“Panpsychism is for me a distant third. Aside from the fact that it just sounds a bit bizarre, the biggest problem for panpsychism is that it’s unclear how exactly our experience as human beings is supposed to be composed out of the consciousness of the particles that our brains are made up of.

“Even supposing that each of the particles that compose my brain has some primitive form of consciousness, how are all these distinct consciousnesses somehow blended together to produce the complex, unified experience that I enjoy?