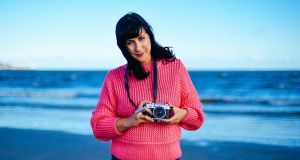 Ruth Medjber: ‘Someone whose whole identity is wrapped up in being ‘a photographer’. Photograph: Colm Moore

In January 2020 my work diary was packed. As a music photographer, I had gig after gig lined up and was even due to shoot Glastonbury for the BBC in June. I was to then fly to Australia where a gallery had invited me to show a collection of my best music photography. Things were finally coming together at the not-so-young age of 33. It was the first time in my career that I felt I could finally call myself a “music photographer”; the first time my entire income came from music. Then, one day, the music paused.

By late March I was in a very dark place. I was scrambling to keep my thoughts happy and I was using photography as a form of therapy. Each day I’d ask my social media followers to suggest a word or a concept for me to shoot. I’d then spend the day in my own little world trying to create art around that word. “Bananas” remains my bestselling print.

Then an idea came back to me. I had always wanted to photograph people through their windows at twilight but it was an idea I had cast aside for being too voyeuristic and irrelevant. Now though, it had perfect relevance. On March 23rd I visited my best friend and photographed her and her family through their living-room window. Instead of popping in for tea like I normally would, I said goodbye, turned around and got back in my car. I looked through the camera and realised I had captured something poignant, something heartbreaking.

I continued shooting through windows every night for the next 3½ months. It brought me comfort in ways that I never knew my craft could. I had given myself a purpose again, a sense of self-worth. For someone whose whole identity is wrapped up in being “a photographer”, I felt lost when I’d nothing to photograph. So having a goal each night gave me back a lot of what I had lost. It also scratched my creative itch.

But the true worth in this project was the interaction with other people; something I hadn’t realised how much I needed. I always thought it was photography that made me who I am, but it was also about the people that photography helped me meet. Working with new people, every single day, was what I loved the most.

One of the unexpected revelations of this project was just how kind total strangers can be. The invite to be in the project was an open one. All anyone had to do was contact me and tell me where they lived and if I was in their area, I’d photograph them.

I wasn’t prepared for the kindness I was shown by these lovely strangers. I was offered endless cups of tea and glasses of wine and often there were gifts hidden in the garden. Some even had little bottles of hand sanitiser beside them so that I’d know their hands were clean. Bottles of wine and whiskey, colourful cards drawn by the children, bath bombs, candles, all things you could pick up from the supermarket or pharmacy. I was often close to tears as I said my goodbyes, wishing I could join them for that cup of tea and let them know just what their kindness had done for me, the stranger at their window.