Campaigning for better conditions for artists in Sellotaped shoes 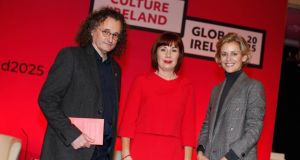 At the Global Ireland culture conference in Dublin Castle on Thursday, which looked at how to increase Ireland’s global footprint through culture, one of the things that came up again and again was the importance of supporting artists so that they can create the work which is part of that global cultural footprint.

More than 250 delegates - ranging from diplomats to arts agencies, to international bookers to arts producers to individual artists - were at Culture Ireland’s conference in St Patrick’s Hall in Dublin Castle, which aimed to engage with key stakeholders in the arts and debate how Ireland can strategically strengthen and advance its renowned distinctive global reputation for creativity.

In some ways the conference was like a giant think tank with some key figures in the audience and on the stage in panel discussions, networking and an eclectic range of performances - by actor Tommy Creed, musician Wallis Bird, singer Daoirí Farrell and spoken word artist Felispeaks, some of whom were afterwards booked to perform abroad.

Minister for Culture, Heritage and the Gaeltacht Josepha Madigan opened the conference, just a couple of weeks after setting up another part of the Global 2025 plan, appointing cultural ambassadors. Two of them - musician Martin Hayes and architect Shelley McNamara - took part in discussions in Dublin Castle and another cultural ambassador, poet Paul Muldoon, wrote for its programme. Muldoon wrote about flying a flag for the Republic of Ireland, as “one of the most free-thinking, forward-looking, and fearlessly self-confident nations”, whose self confidence stems from “a double sense of justice and joy”. He was keen to take the message to his adopted US homeland.

Culture Ireland, seen as key in bringing Irish creatives to a wider audience, was established in 2005 and has worked with thousands of artists (in architecture, film, opera, dance, film, literature, music, visual arts, street art and circus) to bring Irish art to over 50 countries, and an audiences of over 50 million people - as a lively and stirring video starting the conference reminded the audience.

The minister acknowledged the current focus on the precarious nature of freelance artists’ lives, stressing “the importance we place in our artists. We treasure them and the intrinsic value of the work they do. The connections artists make, the doors they open for Ireland are of additional benefit of course, but our artists must be valued in and of themselves. This Government understands the importance of culture and is committed to supporting it.” She repeated the Taoiseach’s commitment to doubling funding -for culture, heritage and the Gaeltacht by 2025.

It’s been quite a start to the year, clearly; the minister said in her conference opening that she had in the past weeks “engaged in communications with artists on the challenges they are currently facing. I understand the issues involved and I remain dedicated to working with the arts sector to address them. We must serve our artists to serve our society.

“I am also acutely aware that when we discuss the global reputation of Irish artists, the talent these artists hold was largely born and nurtured in Ireland. It is critical that we support artists at home before they can develop a global profile. So too is it important that they can travel, collaborate and grow from the experience of working with other artists in other cultures.”

And while the discussions were wide-ranging and thoughtful and practical, and occasionally entertaining, the big issue under a spotlight right now, in what appears to be almost a call to arms coming out from under a cloak of poverty, kept coming up in various ways. That is: support for artists at home so they can afford to live with dignity and be able to produce the work with which they fly the flag abroad.

From speakers at the conference there was clearly respect and appreciation for the work Culture Ireland does and what it has achieved in promoting Irish culture abroad, but an underlying point was there’s not much point in promoting Irish arts abroad if the artists themselves aren’t supported at home.

The big issue came up, for example, in a panel on the changing nature of Ireland’s heritage and cultural identity. Author Emma Dabiri spoke about the excitement of moving to London nearly 20 years ago, but watching as austerity and a housing crisis there led to what she described “the death of culture” in London, and its “corporatisation and sanitisation” as a direct result of that austerity and lack of investment in the arts. This happened shockingly quickly, she said.

The impact of the cost of housing on artists making a living, and the consequent class barriers for creating art, was discussed. Fergus Linehan (director of the Edinburgh Festival Fringe), in relation to how hard it is for artists to live in Ireland now, commented that in Edinburgh and Glasgow, there is no property speculation, and it is possible for people on modest income to buy a home 10 minutes from the city centre.

Diversity is key to creativity, said Michael Keegan-Dolan (choreographer) and they discussed notions of belonging, and the artist as outsider.

Writer/ director Carmel Winters was, she said, wearing shoes held together with Sellotape “as part of the campaign for better conditions for artists.” She talked about working on film and theatre projects, and said “I could do a vast amount of work if I wasn’t filling in application forms”, which was applauded.

Architect Shelly McNamara of Grafton Architects talked about the humanism and inclusion at the core of architecture, and described how culture connects us to something bigger than ourselves, how the energy of music or film or architecture gives people a sense of place or belonging.

Even the panel’s conversation about the local becoming international in a global world, comes back to support for artists locally: Culture Ireland is a great support in getting artists out into the world, but it’s critical to support artists to make the art.