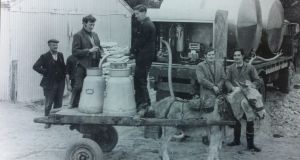 Drinagh Co-op in west Cork was founded in 1923 by an enterprising and dedicated group of local farmers, together with the local curate, Fr John Crowley.

Twenty years ago, my grandfather John Durkin, emigrated aged 90 from Dawros, Sligo to join our family in Manchester. A vivid childhood memory I carry is that he cried the day the last cow was sold before he left, thus ending a lifelong involvement in farming. For years after he would regale my sister and I with stories from his agrarian adventures. His trips to and from Achonry Co-operative Creamery provided the setting for many tales - a reminder the journey to deliver fresh milk to the ‘co-op’ punctuated daily rural routines.

Co-operative creameries shaped the households in which both my parents grew up and today their memories of those institutions provide a source of fond nostalgia. But the creamery provided a means of existence too. Milk cheques paid to grandparents in Kerry and Sligo provided a source of income, just as they did in many households across Ireland.

Being from Manchester I was aware of another co-operative movement. There, local co-ops meant high-street grocers, banks, insurance brokers, funeral directors -a whole range of essential services existed under the umbrella of the Co-operative Group. Despite recent troubles the group remains a major part of the UK’s, and Manchester’s, economy.

Raised in a family where an ideal of rural Ireland formed an important part of my identity, the co-op seemingly connected Manchester to Ireland. By researching the history of co-operation I aimed to establish a historical synergy that linked my joint sense of Irish and Mancunian identities.

However, more than a channel of water separated the co-operatives that grew out of England’s industrial revolution and those that emerged out of Ireland’s farms. As I discovered, Irish and British co-operators promoted incompatible visions of what a co-operative society resembled. Indeed, they were vehemently, and sometimes violently, opposed to one another.

If nothing else, my book stands as a testimony that history as a form of therapy is an exercise in futility. Nevertheless, understanding why these differences came about is an important history that deserves to be told.

Civilising Rural Ireland tells the story of a movement that promoted economic democracy against the backdrop of sweeping political change that led to independence. This history of the ‘Co-op’ foregrounds the often controversial efforts to construct a new economy in the countryside. The book recounts an important part of modern Irish history that is at once national and outward-facing, and in which many readers will recall their own familial connections.

Building a Rural Civilisation
The co-operative movement’s emergence at the end of the 19th century radically transformed rural society. The timing of its introduction to the countryside proved fortuitous and born out of necessity. The state of Irish agriculture proved parlous as the Long Depression of the 1870s segued into the social and political fallout of the Land War. Further, the rise of new competitors in Danish dairy farmers provided a source of pessimism for those who identified any future Irish prosperity as dependent on the performance of the agrarian sector.

However, radical ideas grew out of unfavourable circumstances as an unlikely alliance of farmers, artists, landlords, and the occasional Jesuit ushered in a new source of economic expertise - one united by a bold vision to democratise business. As these visionaries promoted a network of co-operative creameries, rural banks, and agricultural supply stores, they aimed at nothing less than the creation of a new economic system - one that drew upon the international precedents of co-operative experiments in Britain, Scandinavia, and Germany.

The innovative and controversial idea behind the movement was that the farmers should directly own their business and means of production. The co-operative structure placed ownership of these businesses directly in the hands of farmers who joined as members with each individual given an equal say in the direction of that business regardless of wealth and status.

And the Irish returned the favour. During the early 20th century other reformers interested in the question of agricultural development, including President Teddy Roosevelt, looked to the Irish movement to understand how co-operatives promoted rural sustainability.

The establishment of the first co-operative creamery at Drumcollogher in 1889 marked a new era. In the words of George William Russell (Æ), who applied his poetic talents in pursuit of economic reform, a generation inspired by co-operative principles set to achieve nothing less than ‘the building of a rural civilization’.

The Irish Agricultural Organisation Society’s (IAOS) establishment in 1894 marked a national effort to co-ordinate a swiftly growing movement with origins rooted in the wider cultural revival. Led by the extraordinary social reformer, Horace Plunkett, promoted by the idiosyncratic visionary Æ, and with the Jesuit economist Fr Tom Finlay brought on board to deflect accusations of anti-Catholic bias, the movement’s objectives went far beyond the creation of new businesses in the countryside - it aimed at social revolution.

Nor was this a quiet, gentle sort of revolution. The introduction of local co-operatives often provoked strife between occupational groups, farmers, and even families. One’s support for the establishment of a co-operative marked that person out as someone prepared to undermine a fragile political consensus.

For example, when Robert Anderson visited Rathkeale in the 1890s to establish a co-operative creamery he was informed at a meeting that “Rathkeale is a Nationalist town … and every pound of butter must be made on Nationalist principles, or it shan’t be made at all.” At another meeting in Clare, Anderson recalled he fled the village after threats by opponents to “cut the livers” out of him.

Nationalists from the Irish Parliamentary Party suspected the co-operative movement’s drive of economic improvements might quell support for Home Rule. If anything the opposite occurred. By the 1910s a new type of nationalism that coalesced around Sinn Féin saw a developmental template for a future independent Irish government in the economic blueprint promoted by co-operators. As the Sinn Féin intellectual Aodh de Blácam argued in 1918, “the future of Ireland lies in Co-operation no observer of the times can doubt”.

Actions taken against the co-operative movement during the War of Independence revealed the importance of creameries to everyday life. Noted essayist, Hubert Butler, recalled these creameries were “destroyed by the Black and Tans, who believed that the farmers hatched sedition over their milk churns”. Whatever, attacks made on co-operatives seriously undermined the legitimacy of British Government in Ireland.

Despite this setback, co-operative creameries remained a part of nationalist thought and policy. The centrality of the co-operative sector to agricultural planning in the Free State was confirmed by the 1924 Agricultural Commission which concluded:  “We firmly believe in the co-operative system, as calculated to promote better business methods, and, we consider that the state may, with advantage spend substantial sums in the teaching of practical co-operation.”

The co-operative consensus established by practical eccentrics such as Plunkett apparently gave way in the second half of the twentieth century to a new liberal consensus that prioritised foreign direct investment and celebrated economic individualism.

This story is too simplistic. While T.K. Whitaker’s Economic Development now sits alongside the Easter Proclamation as sacred touchstones for modern patriots, the Ireland Plunkett dreamed about proved more resilient than many realise. Co-operatives still play an important, albeit reduced, role in the agricultural sector. However, the impetus has moved to other areas. The rejuvenation of the credit union movement in the late 1950s is one obvious example.

Today we are still dealing with the effects of a decade-long crisis. Our economy is haunted by the effects of the financial crash. Meanwhile, political, environmental, and technological developments are creating new uncertainties and challenges.

The growth of societies such as Dublin Food Co-operative, the Urban Co-op, Quay Co-op and brewing co-operatives in Belfast and Dublin, (to name a few) highlight the enduring appeal of co-operation to those who promote a more ethical form of consumption. A nation in the grip of a housing crisis might feel it is worthwhile to explore co-operative solutions such as those advocated by Co-operative Housing Ireland.

Perhaps it is worth exploring once again how we might build a more co-operative economy. After all, there always has been an alternative.