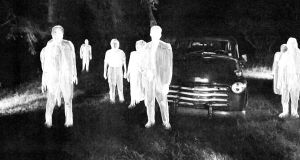 I am NOT legend by artist and filmmaker Andrea Mastrovito.

Back in February, co-directors Maria Schweppe and Tom Lawlor presented their vision for this year’s Bram Stoker Festival to a steering committee made up of Dublin City Council and Fáilte Ireland members. Now in its ninth year, the festival takes place each Halloween and celebrates the legacy of Dracula author Bram Stoker.

Schweppe and Lawlor had a number of events lined up but, like many other festivals, they were forced to redraw their plans after the country was hit by Covid-19.

“We presented a fully realised programme and we were getting going with the whole thing and then the pandemic struck,” says Schweppe.

Initially they tried to formulate contingency plans. “But after much discussion and scenario planning and thinking . . . we decided that there was no point . . .because we had no idea how it was going to go,” she says.

Instead, they downed tools and waited for the dust to settle. When the Government’s roadmap for reopening society and business was released it provided “a bit of a steer” as to what sorts of events might be feasible.

“We were able to look at it like, ‘Well, hopefully by mid-August we will be in a position where we can have 50 people indoors and maybe 200 people outdoors,’” she says. “But . . . we still didn’t know how things were going to pan out and [knew] that we could face further restrictions later in the year. Like many festivals, we looked to how we could potentially adapt our events and make them lockdown- proof.”

They enlisted a facilitator to go through the programme and see what events could be salvaged. “We planned a workshop with her to look at each of the programme elements we had in place and see how we could change them . . . and which would potentially suit a digital world and which absolutely had to be done live,” she says.

“That was very helpful and thankfully we managed to save . . . the majority of the programme. The programme that is on the website today is nearly fully inclusive of what we presented back in February but has been adapted and changed in some way.”

The result is a lively programme that caters to young and old. It features scavenger hunts, walking tours, spooky discos, online creative workshops, films and podcasts, among other things.

“In the way we have adapted stuff, it’s not just streaming,” says Schweppe. “We very much wanted anything we did digitally to be interactive and to have meaning and to also be fun. We felt by the time we got to this time of the year and if we were still in the midst of the pandemic, people would be exhausted and want something that was fun and light-hearted.”

The festival has always boasted a strong family element. In previous years, it has welcomed thousands of children and their parents to parades and pop-up parks. Schweppe says it was important to include a number of free family-friendly events in this year’s programme.

So what does that look like? For one thing, they have partnered with Macnas, the Galway-based street performance company, to create Macnas at Home, a series of creative workshops. A number of videos will be released during the midterm break and will guide families through activities such as “mask-making, creating beats [and] storytelling”. People at home will be encouraged to share their creations on social media using the hashtag #BramStokerMacnas.

Then there is Curse Hunters, an interactive adventure game aimed at children aged six to 11. “For years, we wanted to do a citywide treasure hunt,” says Schweppe. “That was something we were looking at for this year but obviously that wasn’t possible. We thought, ‘What’s another way we can adapt it?’ So we’ve gone with a scavenger hunt. It’s something that can be done at home. It’s not location-based, it’s task-based.”

The game is available to play through the app Actionbound from October 30th to November 2nd. It is free but there is limited capacity. Tickets will be available from October 23rd on a first come, first served basis.

Festival favourite Dracula’s Disco will return with DJ Will Softly spinning “lots of fun Halloween, Monster Mash type tunes” for little ones over Zoom. The event is held in conjunction with the Ark and has developed a cult following over the past few years. “There are definitely some diehard fans who come back every year and continue to dress up,” says Schweppe.

There is plenty in the programme for adult audiences too. This year’s headline event is DracuHa!, a downloadable audio walking tour through Dublin produced in collaboration with Michael McDermott of Totally Dublin and Brian Kenny of Lightscape.*

As part of the tour, they have commissioned writers such as Tony Cantwell, Seamas O’Reilly and Hannah Mamalis to write “humorous horror stories”. They have also commissioned brand new artwork from artists such as Project Twins and Holly Pereira, which will be projected on to a number of buildings around Dublin. “We’re very excited about that,” says Schweppe. “It’s a last-minute addition to the programme that we’re still working on.”

Another programme highlight is Eternal, an immersive audio experience created by Darkfield theatre company. The show is based on Renfield, one of the characters in Dracula, and explores clinical vampirism. “It’s binaural which means the sound will move around when you put your headphones in,” explains Schweppe. “It’s created for one person to do at home lying down in bed. We think it’s going to be quite scary.”

The festival will also host the Irish premiere of I am NOT legend, a striking reimagining of the seminal horror film Night of the Living Dead created by artist and film-maker Andrea Mastrovito.

“Andrea printed every single scene from the movie and painted all of the zombies in white and redigitised them to totally recreate the movie,” Schweppe explains. From there, he created an entirely new screenplay filled with “different quotes from popular culture and movies and books”. The film is accompanied by a score by Irish composers Matthew Nolan and Stephen Shannon.

A number of short films are on RTÉ Culture’s Bram Stoker Festival hub online, including Early House, a horror comedy created especially for the festival, and Abe’s Story, an animated short set in Victorian London. Several podcasts commissioned for release during the festival include podcaster Liam Geraghty exploring Bram Stoker’s influence on pop culture in the five-part series Fangs, and historian Donal Fallon exploring Stoker’s Dublin in a special edition of his podcast Three Castles Burning.

Trick or treating and fancy dress parties may be off the table, but there are still plenty of Halloween events across the country to be enjoyed from home.

Spleodar Halloween Arts Festival in Nenagh, Co Tipperary, but now accessible further afield online, has a packed, free digital programme, from learning about Scary Animals of the World, to tuning into Twisted Tales of Terror, to making birds of paradise or a pet monster sock puppet. spleodar.ie

As well as the Dracula disco with Bram Stoker festival, the Ark children’s cultural centre has free events online in The Ark@Home, including puppet-making and video drama workshops. ark.ie

EPIC the Irish Emigration Museum’s Trick or Treat Around the World online family workshop (€7.50) looks at the origins of Halloween and how it is celebrated in different countries. The museum also hosts a free online Samhain Family Festival on October 26th (12-4pm) with ghost stories, spell-casting sessions and pumpkin-carving workshops. epicchq.com

* Since publication and given the nationwide move to Level 5 restrictions, the walking tour and projections initially planned as part of DracuHa! have been cancelled. This can now be enjoyed as an at-home event