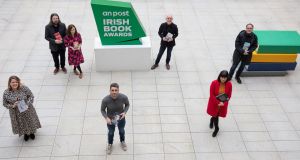 Husband and wife Patrick Freyne and Anna Carey have been shortlisted for this year’s An Post Irish Book Awards, along with a host of well-known writers including Anne Enright, Graham Norton and awardwinning 16-year-old Dara McAnulty, who received a record three nominations, as did novelist and short story writer Caoilinn Hughes.

Freyne, a journalist with The Irish Times, secured two nominations for his essay collection, OK Let’s Do Your Stupid Idea, as did Doireann Ní Ghríofa and the late Keelin Shanley.

Hughes’s second novel, The Wild Laughter, is shortlisted for the Novel of the Year Award alongside debutant Elaine Feeney for As You Were and four of Ireland’s most acclaimed writers: Anne Enright for Actress; Donal Ryan for Strange Flowers; Emma Donoghue for The Pull of the Stars; and Maggie O’Farrell for Hamnet, which has already won the Women’s Prize for Fiction.

Poignantly, two of the nominations are posthumous: the late RTÉ journalist Keelin Shanley for her memoir, A Light that Never Goes Out, and Sam McBratney, who died last month, for Will You Be My Friend?, the sequel to his multi-million selling children’s book, Guess How Much I Love You.

John Treacy, chairperson of the awards, said: “The publishing industry has faced unprecedented challenges this year which makes it all the more critical for us to support Irish books and Irish authors during 2020.”

McAnulty, 16, already this year the youngest ever writer to win the Wainwright Prize for UK nature writing and to be long-listed for the Baillie Gifford Prize for non-fiction, is shortlisted for Popular Non-Fiction Book of the Year; Newcomer of the Year; and RTÉ Radio 1 Listeners’ Choice Award.

Poet Doireann Ní Ghríofa’s nonfiction debut, A Ghost in the Throat, about her fascination with Eibhlín Dubh Ní Chonaill, composer of Caoineadh Airt Uí Laoghaire, has proven an unlikely bestseller. It is up for Non-Fiction Book of the Year and Best Irish Published Book of the Year.

As well as McAnulty and Freyne, the impressively strong Newcomer of the Year shortlist features Michelle Gallen for Big Girl, Small Town; Naoise Dolan for Exciting Times; Niamh Campbell for This Happy; and Rachel Donohue for The Temple House Vanishing.

Debbie Byrne, managing director of An Post Retail, said it was delighted to continue its support, particularly as reading was so important for mental wellbeingby providing comfort and the possibility of escape: “We were very proud to be able to support independent Irish booksellers in maintaining their business during lockdown this year. Reading and its benefits are more important than ever to all ages and there is a wonderful selection of books from great Irish writers throughout the shortlists again this year.”

The public is invited to vote by November 16th for their favourite authors at anpostirishbookawards.ie – the winners will be announced on November 25th and the overall Irish Book of the Year winner will be revealed on December 10th on RTÉ One as part of a highlights show. All voters will be entered into a prize draw to win one of five €100 National Book Tokens vouchers.