Bram Stoker festival: Everything you need to know

Fangs for the legacy as Dublin celebrates the creator of Dracula, the supernatural and Samhain 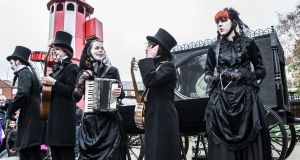 At the centre of the Bram Stoker festival, thousands are expected to line Dublin city streets for the Macnas parade Out of the Wild Sky (bank holiday Monday, starting from Moore Street at 7pm), for some magic and macabre as darkness descends. The Halloween bank holiday weekend shindig expects more than 70,000 people to attend the festival Dublin City Council designed to wrap around a celebration of both the supernatural and of Samhain, as well as marking the legacy of the Irish author of Dracula. The four days (October 26th-29th) include theatre, readings, illustration and animation, outdoor screenings, a fun park and podcasts.

Its flagship is NYsferatu: Symphony of a Century (Friday, 26th) in St Anne’s Church, a perfect venue as it’s where Bram Stoker and Florence Balcombe married in 1878. It involves a rotoscope (an animation technique tracing over footage to produce realistic action) recreation of the classic 1922 horror film Nosferatu, set in present day New York . It features 35,000 hand-drawn images, replicating the eerie, flickering shutter effect of early cinema, and aims to challenge the classic interpretation of the vampire as an outsider, rather addressing the obstacles immigrants meet when they experience economic exploitation, discrimination and xenophobia. The world premiere of a newly commissioned live score is by Irish composer Matthew Nolan, played by Erik Friedlander Sean MacErlaine and Jan Bang.

Elsewhere over the weekend, adults (only) can face their fears at Creature Features, horror-comedy screenings at the Botanic Gardens. Arachnophobia (1990), Little Shop of Horrors (1986) and Invasion of the Body Snatchers (1978) will play against the suitably atmospheric backdrop of the Victorian glasshouses.

Writer Deborah Harkness is in Conversation with Patrick Freyne (of this parish) when she discusses her best-selling A Discovery of Witches, All Souls Trilogy (both adapted for Sky One), and her new novel Time’s Convert.

The Night of the Shifting Bog is a new circus show from Loosysmokes, an outdoor, night-time aerial acrobatic show in St Anne’s Park woodlands in Clontarf; it’s based on a passage from The Snake’s Pass, Stoker’s only novel set in Irish boglands. The Horrors in the Black Church in Dublin Castle’s Chapel Royal combines three short horror plays in one show, directed by Anna Shiels McNamee, and written by Peter Dunne, Lauren Shannon Jones and Stuart Roche.

Stokerland is a free pop-up Victorian fun park over the weekend in St Patrick’s Park. Families can catch street theatre, Victorian funfair rides and ghoulish games in the shadow of St Patrick’s cathedral. There’s also Dracula’s Disco on bank holiday Monday at Meeting House Square, and an animation workshop (Sunday) at Brown Bag Films with a director of Disney’s Vampirina.

Named for the Irish author of Dracula, who was born in Clontarf in 1847, some Stoker experts have in the past taken issue with the festival, saying it has scant connection with the writer or his work. The short Halloween skite leverages the city’s connection with a scary persona that is well removed from Stoker’s character, and has become a ubiquitous Halloween costume. No matter; while it doesn’t do what some people read on the tin, it does use Stoker as a jumping off point.