On the Edge: Diarmaid Ferriter’s powerful new history of islands

Fundamental themes of modern Ireland are explored through islanders’ stories 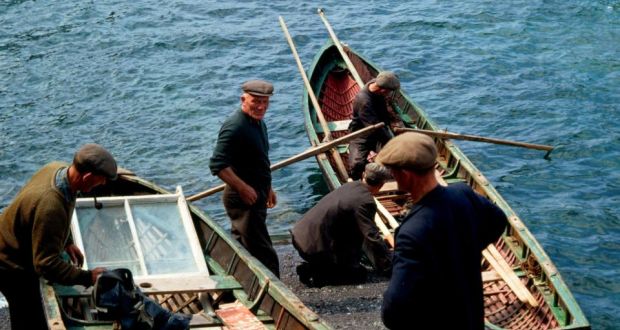 “What a strange place for anyone to call home,” remarked Belfast woman Norah Workman of the Aran Islands in 1895. Our nation’s offshore islands have long been shrouded in mystery and myth, their decline an emotive but little-understood subplot of our past. In this important new history, Diarmaid Ferriter reveals that while “there was no single island experience”, their many stories “magnify fundamental themes” of modern Ireland, from language to religion, state-building to emigration. Things look different from the edge.

Nowhere in the impoverished fringes of British Ireland was as isolated as what a poor relief committee called these “desolate prisons amidst the Atlantic”. The islands were, Ordnance Survey draughtsman William Wakeman remarked in 1839, “terra incognita”, and Ferriter’s meticulous research shows that they were wild places in all the senses of the word. When a British gunboat was sent to collect unpaid taxes on the Blaskets, the islanders stoned the craft and crew. After an indulgent RIC man let an Inishmurray woman keep her stash of poitín, she offered him a grateful taste in an egg-cup because a raucous party had “smashed every article of glass or crockery in the place”.

Ferriter particularly highlights the stories of island priests, characters ranging from tyrants to exiles to crusaders. When Fr John Healy needed to reach a dying man on Inishmurray in the 1870s, he found the local fishermen too drunk to row, so he pressganged some local women instead: “the first woman who leaves her place” he warned in the boat, “I’ll shoot her dead”. “Send us boats or send us coffins” pleaded Fr Michael O’Donoghue from Aran in the 1890s, while a dispute over power and land there led to an attempt to assassinate the infamous Fr Farragher with a homemade bomb in 1908.

To the nationalists of the Gaelic revival, the islands were the last well of a dying culture. “It is only in such places that one gets a glimpse of what Ireland may become again,” waxed Michael Collins. From Pearse to de Valera, the men of the national struggle flocked to the islands like pilgrims seeking sup from the Holy Grail. Eoin MacNeill pleaded with his comrades not to ply “the natives” with drink to get them to speak Irish or tell stories. These were, one newspaper declared, “the last outposts of the Gael, the bastions of Gaelic civilisation and the treasure house of our ancient culture”.

Artists too were fascinated by these unstable places assaulted by crashing wind and lashing sea. EM Forster described the Blaskets as a “Neolithic civilisation”, while Orson Welles called Aran “the most primitive spot in Europe, where an intelligent aristocratic people live in archaic simplicity, surpassing anything in Homer”. JM Synge – drawn, WB Yeats said, to “all that had edge” – found a world continually passing “between the misery of last night and the splendour of today”.

There was little splendour in poverty, but the work of the Congested Districts Board brought many improvements. Independence, however, offered little: there was no single agency or department responsible for the islands so islanders were, one complained in 1931, “referred from Herod to Pilate until we didn’t know where to go”. “The bald reality, and deep irony,” Ferriter writes, “was that more was done for the islands under British rule than was done in the early decades of native rule”.

Islanders received awards for preserving a language whose decline the state failed to halt, but electricity, harbours, ferries, and bridges were less forthcoming. The 1925 Commission on the Gaeltacht was shocked that the people of Arranmore wanted education in English. “Do they not realise,” asked the exasperated chairman, that “they have got something which the rest of the country has not got?” No, their priest Fr Duggan explained: “Scotland and America are better to them than Ireland”.

Tragedies roused public sympathy but little change. In 1927, 44 fishermen died in the seas off Cleggan due to an inadequate weather warning, devastating island communities. In 1935, 19 islanders died when a yawl carrying them home to Arranmore struck a rock. “The world has spelled out its crimes in corpses” railed Peadar O’Donnell. Two years later, 10 boys from Achill burned to death at Kirkintilloch on what O’Donnell called the “trek to the Scottish tattie field”, their unidentifiable corpses found huddled together in their bothy. Like so many migrants, Ferriter comments, “they counted for little”.

Yet alongside official neglect, there was ground-breaking folklore collection, acclaimed literature, and scholarly interest. Island conversation was legendary, “its vitality”, classicist George Thomson wrote, “inexhaustible”, but Seán Ó Faoláin was scathing of the “literary hirelings” and “professional Gaels” whose condescension erased island humanity; without emerald-tinted glasses there was little romantic about poverty and isolation.

Ferriter’s thematic structure allows him to skilfully pose big questions with the small stories of small places, but a shuffling of chapters would have shown the links he draws between politics and culture even more clearly. While there are few international comparisons, his mastery of modern Ireland’s dynamics and ideologies lays bare the hypocrisy at the heart of the state’s “reservation” mentality towards people it often portrayed as “almost alien”. “There is no wireless on the island,” a civil servant reported from the Great Blasket in 1947, “but from the point of view of Irish, perhaps this is just as well”.

“The land is sick,” Denis Coughlan wrote in this newspaper of Cape Clear in 1968, “sick with the cancer of indifference and lack of capital”. By then the Blasket (“this dreadful rock”, Peig Sayers called it) and many other islands had been evacuated due to the difficulties of sustaining medical care, the pull of migration, and especially the flight of young women from isolated little kingdoms with no opportunity.

Today, the islands are being reimagined. Many are the preserve of weekenders, the Skelligs the icons of Star Wars, Aran home to luxury retreats and expensive knits. Ferriter sees this diversity and reinvention as evidence that the islands may still have a future, one very different to their past. Whatever their tomorrows, this powerful history of the islands and their people confirms the words of Tomás Ó Criomhthain’s in An tOileánach: Ní bheidh a leithéidí arís ann.