‘When I was young, I thought I was the only one of my friends who did that’ 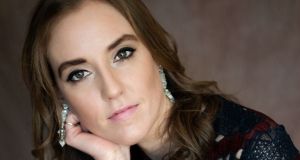 You may have heard of this O’Neill wan. Hailing from Clonakilty, west Cork – the only part of Ireland where anyone is allowed to have self-esteem, incidentally – she’s having a stellar year that includes the release of two bestselling novels (her third and fourth) and the premiere of a play adapted from her second book, Asking For It (which had a sold-out run at the Everyman Theatre in Cork and is coming to the Abbey in the autumn).

For the begrudgers amongst you, though, rest assured – she too is human, and as such susceptible to the nonsense of Ryanair, recently ending up in Vienna rather than Budapest en route to a friend’s wedding. Ryanair crankiness: is there anything else that unites so much as a nation?

O’Neill’s fourth novel, The Surface Breaks, is her first with Scholastic (her first three novels were published by Quercus) and came about in that way that can only happen after the success of an already-published book. Lauren Fortune, editor at Scholastic, suggested a retelling of The Little Mermaid – a fairytale close to O’Neill’s heart.

She was already “knee-deep in writing my third novel, Almost Love, at the time, and while accepting Scholastic’s offer probably seemed like an act of lunacy on my behalf, it was still an offer I couldn’t refuse. I had been obsessed with this tale since I was a very small child but as a teenager, and beginning to identify as a feminist, it became clear to me that some of the messaging was deeply problematic. The chance to reclaim the story, and the little mermaid herself, was irresistible.”

For a woman who spent her early years on Inchydoney Beach, who remembers her younger wandering self as “half human child, half sea creature . . . I was utterly fascinated by the water”, it’s almost inevitable that mermaid stories spoke to her. This was compounded by the release of Disney’s The Little Mermaid (1989), when she was four years old: “I was instantly captivated by the possibility that there could be a magical kingdom beneath the waves that perhaps one day I might be lucky enough to visit. I also identified with Ariel. Firstly, she was a redhead (Gingers FTW), but most of all, she was dreamy and curious and didn’t feel as if she quite belonged in the one place that was supposed to be her home.

“A lot of my novels deal with main characters who feel trapped in some way, but none more so than Gaia, who is trapped by her over bearing father, by the demands of the society in which she lives, by the spectre of her dead mother. I also felt trapped for a very long time – that is an experience I am acutely familiar with. I knew I could capture the Little Mermaid’s sense of yearning and longing because I knew it so well.”

O’Neill had read other fairytale retellings before embarking on this project: first Roald Dahl’s Revolting Rhymes, which she “absolutely adored. Never underestimate a small child’s appetite for boldness. ‘The small girl smiles, her eyelids flickers, she whips a pistol from her knickers.’ This was a Red Riding Hood I could get down with.”

As a teenager, she read Angela Carter’s The Bloody Chamber and “fell instantly in love. Her stories were so dark, so bleak, so feminist, and so shocking. It remains one of my favourite collection of short stories ever written.” But for The Surface Breaks she consciously eschewed recent retellings, instead revisiting Hans Christian Andersen’s take over and over again.

“I realised that there was so much to work with there. Within that I wanted to hew as close as I could to his version. I was surprised by how dark it is, particularly from a feminist perspective as the Sea Witch candidly tells the Little Mermaid that her body will be a more valuable asset in attracting the attention of the Prince than her voice,” O’Neill notes.

The Disney version also struck her as sanitised, “eschewing the violence of the original story in which the Little Mermaid is in unimaginable pain with every step she takes on her new human legs.” She hasn’t rewatched it while working on the book but may revisit now – particularly for Ursula, the Sea-Witch (“what a badass!”) – alongside other fairytale retellings (she’s recently finished a proof copy of Jessie Burton’s The Restless Girls, which she loves, as well as Deirdre Sullivan’s Tangleweed and Brine).

The writing of The Surface Breaks was a strange thing, coming at a time when O’Neill was working on edits for her debut adult novel. “I finished the first draft of Almost Love on a Thursday, gave myself the Friday off because it was my birthday, and then started the first draft of The Surface Breaks on the Monday,” she reports. (Let us all feel deeply inadequate now.)

“I had a bit of time because my editor at riverrun was still on maternity leave,” she adds, “so I used those couple of months to focus entirely on sketching out The Surface Breaks, figuring out the characters’ voices, and getting as many chapters as I could committed to the page.”

As she went on, editorial notes for Almost Love arrived. She worked on The Surface Breaks between 5.30am-10am with edits after that. “I was doing that six days a week (and writing my weekly column for the Irish Examiner on the Sunday) so I was fairly exhausted, especially when I started to suffer with acute insomnia that lasted around six months. Funnily enough, I found them relatively easy to keep separate. The voices of Gaia and Sarah were so different, and the worlds they inhabited were completely dissimilar. I was able to keep a certain amount of emotional distance between me and The Surface Breaks because it wasn’t my story, and in some ways that made it a much more enjoyable book to write. It was an escape, in a lot of ways, a space where I could let my imagination run wild.”

At the same time, O’Neill recognises there are some similarities between the two books. While she views The Surface Breaks as “a sister novel to Only Ever Yours”, her first book (set in a dystopian, Atwood-esque society that will resonate with anyone who’s been through an all-girls’ school in Ireland), she’s conscious that it also echoes Almost Love: “Sarah is obsessed with the sea, and is constantly attempting to capture its essence through her art work. So is she haunted by the memory of her dead mother, and Sarah, like the little mermaid, also allows herself to become silenced in the name of finding true love. Gaia is much more innocent than Sarah, though, although she becomes increasingly aware as the narrative continues.”

She finds it difficult to classify her own books, conscious that her novels have been blurry-lined from the beginning. “Because my first two books were often seen as ‘cross-over’ between YA and adult, it’s really hard for me to say what I think the dividing line is between the two. I do tend to write in first person, present tense narrative when writing YA and I wrote in the past tense for my adult novel, partially in the third person. I think the reason for this is that fiction for teenagers often feels much more immediate – there is a sense of urgency and vitality that characterises the teenage experience itself.

“I don’t mind how my books are labelled. All I ever wanted was for them to be read.”

The editorial team were supportive, thankfully – letting her fulfil the promise of her premise, and offering up a critique of patriarchal society.

Like so many others, I can’t wait to see what O’Neill does next.
Louise O’Neill takes part in the CBI International Conference: Dreams & Nightmares on September 22nd and 23rd in Dublin. Claire Hennessy is a YA writer, reader and commentator