White privilege: ‘I am a refugee, fleeing the mindsets of the 20th century’

Patrick Cotter on owning up to his whiteness, subject of his new collection, Sonic White Poise 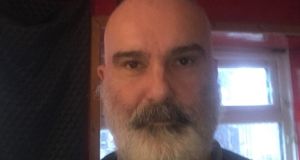 Patrick Cotter: “the poet must be clear and resolute in their support for progressive society off the page”

There are two reasons why my latest book is called Sonic White Poise. First, as a straight allusion to Paul Celan’s poem Espenbaum. (Aspen tree your leaves glance white into the dark, in Michael Hamburger’s translation).

The underside of an aspen leaf is so pale compared to its other side that it appears white. The leaves of the aspen tree are reputedly louder than the leaves of other trees when rustled, thus Sonic White Poise, adjusted from a locution to be found in my poem concerning trees, The Discoveries of Thomas Fynch.

Espenbaum is totemic to me. I first read it 41 years ago as a schoolboy attending a workshop presented by John F Deane. Celan’s poem is a masterclass in the presentation of a real, actual event through the language and conventions of European Surrealism; a lesson in how Surrealism can be a vehicle for the real. While it is an affecting account of a son’s loss after his mother’s murder, its enduring appeal to me is on the level of its aesthetic achievement.

The other reason for my book’s title is to own up to my whiteness. Some people assert their whiteness as an expression of White Nationalism – I have no time for such eejits. As a person whose 1970s childhood was overshadowed by the unremitting bloodshed in Northern Ireland I have a developed, deep-rooted revulsion for nationalisms of every ilk. I choose to identify as white in my book in order to acknowledge that white is not the default colour of humanity.

In the western literary tradition the only protagonists who have the colour of their skin described are those whose colour is different from the white authors who created them. White characters are presumed to be white. The question of white privilege and white saviour complex was never far from my mind in the composition of many of the poems included in this book.

To my knowledge, in 1970s Cork there was just one solitary Irish black child. One home-grown black child in the second largest city of our country. The nation, in all practicality, was homogeneously white. As late as the 1990s American observers were irate that a film like The Commitments, about black soul music, could be made in Ireland without any black person. A correspondent was dispatched to Dublin from New York who reported that he “traveled right out to the projects” and could find only white people.

The past is a different country. Ireland in the 2020s is quite a different place again and all the better for it. It behoves its artistic creators to acknowledge that. Raised in a different country from my children (who have a sibling of colour) I have had a suite of world views to adjust and reset. I am a refugee, fleeing the mindsets of the 20th century.

My father was a big Johnny Weissmuller fan and with him I, as a child, would have watched most of the Tarzan films with Irish actor Maureen O’Sullivan front of screen, while a troupe of African extras provided anonymous local colour in the background. Teilifís Éireann also broadcast its fair share of British movies of the ’30s and ’40s, extolling the putative virtues of imperialism.

I began my re-education by coming across Edward Said’s Orientalism at the turn of the century. Said helped relegate the English adjective oriental to the description of carpets and not persons. My poem The Isle of Langette recounts the narrative of an explorer who seeks out a lost world, when he gets there he describes the occupants in the language of occidentalist exoticism. The story does not end well for him.

In Prayer Service (first published in an early version in The Irish Times) I recount my experience of attending the funeral of Nuala Ní Dhomhnaill ’s husband. Dogan was a Turk and his funeral service took place in a Dublin mosque, attended by half the poets of Ireland. One issue for me was the experience of a lapsed theist attending a structured prayer service, but other concerns presented themselves where a white Irish person, raised in the Catholic tradition, enters an Irish mosque for the first time.

In my life I have been fortunate enough to have, among the women who have shown me love, women of colour. Several poems in the book address questions of privilege and occidentalism in the context of one relationship. My poem Dinka had as its starting point a particular portrait of a man by Leni Riefenstahl. Possibly, in portraying Dinka and Nubian people as paragons of beauty and physical perfection, Riefenstahl was compensating for her earlier association with the Hitler gang’s moronic assertion of Nordic Übermenschheit; probably not. Either way her Afrika portfolio is problematic for its white gaze. And those problems are referenced in my poem, ambivalently, ambiguously, along with other efforts to sidestep white privilege and saviour complexes.

I loathe explaining or justifying my poems. I would wish to live in an aesthetic utopia where a Joycean “silence and cunning” remained the order of the day. I was never one for shrouding myself in artistic intrigue and mystery but in my ideal world every poem is consumed by an omnisciently insightful reader immersed in literary convention and non-convention. In this world the poet belongs to a priestly class whose liturgy is never questioned or justified, merely liked or disliked. We do not live in such a world.

The late American poet Tony Hoagland discovered that fact to his grief. In his 2003 collection What Narcissism Means To Me he included a poem called The Change. The poem had previously been published in the journal Agni, so it is a text which has been knocking about for quite some time. As you can guess from the title of his book Hoagland was an ironist.

Another of the poems in the book is called Poem in Which I Make the Mistake of Comparing Billie Holiday to a Cosmic Washerwoman. The Change concerns a white American protagonist who is observing someone like Serena Williams playing tennis against a “European blonde”. The protagonist of the poem describes the Williams-like character with tropes most enlightened people would find offensive and goes on to say:

The white girl to come out on top,

Because she was one of my kind, my tribe,

With her pale eyes and thin lips

And because the black girl was so big

In the context of the full collection and Hoagland’s inclination for mischief I read the poem as a self-aware account of unself-aware racism. My interpretation was that Hoagland did not endorse the opinions of his protagonist and was implicitly condemning them by exposing their existence.

Years after it was first published, Claudia Rankine came across the poem. She considered the possibility of a reading such as mine but seemed to settle on the opinion that it was an unselfaware account of unapologetic racism. She called Hoagland to account. But Hoagland made the mistake of believing that, like a mid-20th-century Beckett or Joyce, he should make no account of himself and his poem.

He learnt for himself, and for all of us, that we are at the wrong transection point in history to cultivate a position of aesthetic elitism or poetic priesthood. The affair left him out in the cold, interpreted as patronising and dismissive. He was loved to his grave by luminaries such as Terrance Hayes, but life was never the same for him after reports of his inadequate response to Rankine went viral.

Poems need to be ambiguous, sometimes ambivalent, nuanced. An art work’s relationship to generally perceived truth needs to be complex and complicated because people are. We consume art to discover how particular individuals struggle with asserting their individuality amidst a society which demands crowd conformity.

There is no point in producing a poem which is completely in tune with perceived moral correctness. Such a text would be mere agitprop or an essay in political philosophy or, at the very least, a performative exercise in virtue signalling. But while acknowledging that a poem should be nuanced, concomitantly the poet cannot be nuanced, cannot be ambivalent, cannot be ambiguous.

Whatever might be needed to be said on the page to be artistically truthful, in these troubling times, ( the word “troubles” of course has a particular understated connotation in Irish discourse) the poet must be clear and resolute in their support for progressive society off the page.

Sonic White Poise, a collection of poems by Patrick Cotter, has just been published by the Dedalus Press, Dublin