Jean Sulivan: the priesthood of the pen

Eamon Maher on the influential French writer and priest, whose memoir he translated 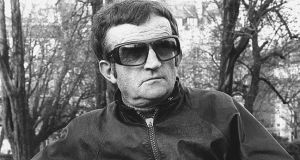 Jean Sulivan: Last year, to mark the 40th anniversary of his death, Le Monde pulbished a collection of reviews of his books, along with tributes from readers and critics

Towards the end of a journey from the south west of France up to Cherbourg after a family holiday some years ago, I spotted a signpost for Montauban-de-Bretagne. As we had some time before boarding the ferry, I turned off the motorway and made my way to the cemetery of this pretty hamlet.

My purpose was to seek out the grave of a priest-writer, Jean Sulivan, whose work had been recommended to me in 1991 (30 years ago!) by my prospective PhD supervisor, Patrick Gormally. That suggestion sparked a life-long fascination with a writer who changed my way of looking at the world. It came as a shock recently to discover that February 16th marked the 41st anniversary of Sulivan’s death.

Born in 1913, his real name was Joseph Lemarchand. The loss of his father in the trenches of the Great War led to the remarriage of his mother out of financial necessity. Life in rural Brittany at the start of the 20th century was strongly Catholic – the similarities with Ireland are quite pronounced – and so it came no real surprise when Sulivan decided to enter the junior seminary of Chateaugiron. He did not like the training he received for the priesthood, which consisted of a lot of rote learning and the repetition of formulas that were not subjected to any serious intellectual critique.

After ordination in 1938, l’abbé Lemarchand worked as a teacher in Rennes, where he also ran a successful cinéclub, La Chambre noire, and a cultural centre, Renaissance spirituelle. The success of these two initiatives can be seen in the fact that La Chambre noire had French directors such as Robert Bresson, Jean-Luc Godard and Eric Rohmer as guests to present their films, whereas Renaissance spirituelle brought public figures of the calibre of François Mauriac, Gabriel Marcel, Pierre de Boisdeffre, Jules Romains and the social justice activist l’abbé Pierre to the Breton capital.

When his first book appeared in 1958, Sulivan realised that his real desire was to pursue a “priesthood of the pen”. He was fortunate in having an enlightened superior, Cardinal Roques, who released him from pastoral duties and allowed him to move to Paris to concentrate on a literary career. That was a daring decision, because Sulivan’s books sometimes contained stinging attacks on clericalism and the abuse of power within the Church. I doubt very much he would have been granted the same freedom in Ireland at that time – or even now, for that matter.

Sulivan went on to write10 novels, two short story collections, a two-tome spiritual journal, Morning Light, several articles in Le Monde and other newspapers, as well as a moving memoir, Anticipate Every Goodbye, which I translated into English. He received numerous literary awards and his books appeared under the prestigious Gallimard imprint. (The Gallimard connection is something he shares with Albert Camus, who was also born in 1913 and lost his father in the First World War.)

His fiction is populated in the main by rebel priests, prostitutes, down-and-outs and drug addicts. In Sulivan’s estimation, such people often live out the true message of Christianity more authentically than those living at the centre of “respectable” society.

When his second novel, The Sea Remains, was awarded the Grand Prix Catholique de littérature in 1964, it looked as if his career was consolidated. Yet, at the awards ceremony, Sulivan felt like a fraud. The novel describes a cardinal who turns his back on his exalted position within the church in order to facilitate the escape of a political prisoner, thus bringing down on himself the rancour of the political and ecclesiastical powers whose favour he had carefully nurtured during his career, and yet here was Sulivan being feted by the literary and Catholic establishments.

His main motivation in accepting the prize was to allay the fears his mother harboured in relation to his writing. He also felt it would have been ungrateful not to accept it after all the effort that his champion, Daniel-Rops of the Académie Française, had invested in securing him this honour. But from that point onwards, he abandoned the desire to write in a classical style and his prose became more disjointed, his characters increasingly radical.

Eternity, My Beloved (1966) portrays Strozzi, modelled on the real-life figure, Auguste Rossi, a priest who ends his career ministering to the prostitutes of Pigalle. Sulivan marvels at this man’s unconditional love of his “flock”, one of whom, Paquerette, remarks that he was, “The first man who ever looked on her as a human being. Everything probably starts from this point: self-respect becomes possible again”.

Anticipate Every Goodbye is a moving description of his youth in Brittany and his close relationship with his mother. She never understood the form of priesthood he chose and would have loved him to say Mass in the local church and to wear conventional clerical dress (his usual attire was a leather jacket, sweater and sunglasses). About his books, she often complained that they had neither beginning nor end, and that the language and characters were perplexing. The weekly trips home were precious to Sulivan. He dreaded the thought of life without this vital presence. But when her time on earth ended, it was a painful liberation for Sulivan. Afterwards, he could write in any way or about any subject he wanted without upsetting her sensibilities.

Last year, to mark the 40th anniversary of Sulivan’s death, the poet Jean Lavoué put together a collection of reviews of his books in Le Monde, along with tributes from readers and literary critics. Entitled Jean Sulivan: Dans l’espérance d’une parole, it reminded me of just what a significant writer Sulivan had been during the 1960s and 70s, when the vast bulk of his writing was published.

For example, the renowned French critic Henri Guillemin’s Sulivan ou la parole libératrice is the only book the latter ever published on a living writer. Guillemin was admiring of Sulivan’s unwavering seeking out of the truth, his exploration of the inner recesses of the human soul and the way in which his writing, in what was a natural extension of his priesthood, helped people to live.

It is not without significance either that Jacqueline Piatier, the main literary critic with Le Monde who created the famous Le Monde des Livres literary supplement, reviewed many of Sulivan’s works herself, all of which are reproduced in Lavoué’s collection. Pierre-Henri Simon, another cultural luminary and member of the Académie Française, equally responded very positively to Sulivan’s innovation and style. So one can see that the writer made his mark on the French reading public at a time when there was plenty of competition in the market.

So what was it like, when I eventually found Jean Sulivan’s grave on that July day? Well, I experienced a real connection with the spirit of a man whose writing has marked me profoundly. I also felt gratitude to someone who during the last 30 years has become a source of comfort and inspiration, a real “compagnon de route”. I am determined to continue my conversation with Sulivan, to reacquaint myself with his characters, and to persuade the Anglo-Saxon (and French) public to appreciate the contribution he made to 20th-century Christian literature. It is the very least he deserves.

Eamon Maher is director of the National Centre for Franco-Irish Studies in TU Dublin. His Jean Sulivan (1913-1980): La marginalité dans la vie et l’oeuvre is one of only two book-length studies on his work.