Why I write: Author Rosemary Jenkinson on why it’s never too late to be what you might have been 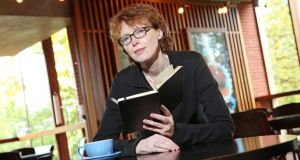 Rosemary Jenkinson: 'Writing itself is an incredible act; to think that from one tiny mind comes a huge world. What could be better than making something beautiful out of your pain and pleasure?' Photograph: Jim Corr

I write because I love to write. To a surprising amount of people in their 20s, writing means sitting about in cafes in black clothes and talking left-wing politics, but in fact it’s about sitting alone for hours at a table.

There are a million delaying tactics to stop you from writing. Beware of the person who advises you to make contacts at some networking event. My experiences of networking are of nervously approaching a director and saying the completely wrong thing. I end up creeping off like a crushed beetle, having done more damage to my career than good, chuntering to myself that JD Salinger never had to bother with all this. And you have to be even more careful of what you say at awards ceremonies. It’s tricky, but you have to strike the right balance of being boastful yet humble – or “bumful”, as I like to call it.

One of the biggest reasons we all write for is success. It isn’t easy to achieve apotheosis into literary legend, but you have to keep trying. Jean Rhys achieved literary fame in her 70s but admitted, “It has come too late”. Personally, I only ever believe it’s too late if you’re dead. Yeah, I’d take success at 80 – to be a winner on a Zimmer is better than never having won at all.

Having already said that writing is about sitting at a desk, there are definitely times you have to ditch the desk. What writers don’t realise is that people don’t buy the writing, they buy the writer. Writing is not about finding your voice, but finding your persona. You can’t just cloister yourself away and expect to become famous unless you’ve a backstory of dodgy health and dying relatives as big as Emily Dickinson’s. Hunter S Thompson had a point when he said, “I hate to advocate drugs, alcohol, violence, or insanity to anyone, but they’ve always worked for me.” If in doubt, you could go for sex instead – Henry Miller and Brecht were great womanisers and Colette and Anaïs Nin were epic manisers too. At any literary do I make a total beeline for the other dipso-brainiacs. Always remember – notoriety is better than sobriety.

Many writers think book readings interfere with writing time, but I’ve often admired the likes of Dickens, Wilde and Thomas who toured the world. Of course, when most of us go on readings we’re in places like Portadown, with five people turning up – three of whom are the organiser’s aunties.

This is a pretty sobering experience, considering that Dickens garnered audiences of thousands in Belfast in the 1850s and ’60s, and shows exactly your position in the literary league table. I always think perhaps it’s just as well I’m not as popular as Dickens, since his book tours were so gruelling the poor guy collapsed with a stroke.

What I really like about writing is that it’s paradoxically solitary, yet sociable. Of course, you’re with people who don’t exist, but it still feels like you’re not alone. Writers in many ways are like children – both have imaginary friends and the best thing is that every day is a play day. I write for the pure fun of it. In sheer celebration of cerebration. You shouldn’t waste your time constantly trying to rewrite to improve what you’ve written. I know some writers talk about “the writing process”, but what are we making here, chicken pies in a factory? My theory is that all writing theory is useless. Just let it flow. Do you think George Bernard Shaw wrote 60 controversial plays by agonising over every word? Far better as a writer to be an antagoniser than an agoniser.

Currently I love being artist-in-residence at the Lyric in Belfast. I still write at home because I’m more comfortable with it, but it’s terrific to have a place to go to and have recognition. Being the AIR is a great honour – and in terms of acronyms it’s much better than being the IRA! However, having a title doesn’t make you a writer, as what you publish is way more important. It’s all about the books, unless you’re one of those poets who like publishing pamphlets. Personally, I think of pamphlets as bits of paper in the doctor’s surgery where you read about STIs and Giving Up Smoking, but then I’m not a poet.

In questioning why I write, I have to say that becoming a writer wasn’t so much a conscious decision for me as going along with something that felt pre-determined. Take my name – it’s so lettery, it stands to reason that I was always going to be wordy. Nominative determinism can definitely be a factor. For example, the playwright Graham Reid was always going to be read.

As George Orwell noted, a prime motive for writing can be to convey a political message, but it’s not the only imperative. Vanity is another big reason to write. When you’re young, everyone loves your body; when you’re a writer, everyone loves your brain. Writing itself is an incredible act; to think that from one tiny mind comes a huge world. What could be better than making something beautiful out of your pain and pleasure? In the words of George Eliot, “It is never too late to be what you might have been,” so pick up that pen.

Then, tonight, head out and pick up a pint.

Rosemary Jenkinson’s latest play, Lives in Translation, was produced by Kabosh at the Belfast International Arts Festival last month. Her short story collection, Catholic Boy, will be published by Doire Press in 2018 with ACNI support. An essay is published in Female Lines by New Island Books, edited by Linda Anderson and Dawn Miranda Sherratt-Bado, whose Dublin launch is on November 7th