‘These eyes that saw me before I saw myself’: the image that inspired a poet

Enda Wyley writes about the inspiration for her new collection, The Painter on his Bike 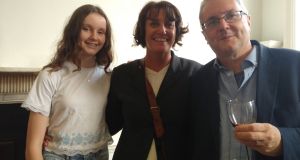 Enda Wyley with her daughter Freya and husband Peter Sirr

The artist had brought these and many more objects – even his communion suit! – into the boys’ school to show the students. These things meant something to him, had inspired him over the years, and each item had an interesting story.

The boys were amused by the unexpected assortment on display. They asked questions, laughed, nudged each other, whispered, passed the things around, listened carefully. And then James Hanley held up something which he said was his “most treasured possession”.

The class leant forward and a hush grew in the room. It was a portrait that he’d sketched in graphite. It showed the face of a clean-shaven man, his hair combed neatly back, his shirt open-necked with a neat jacket over it. But it was the face that drew you in with its dominant nose, the full lips, a defined chin, the slight tilt back of his head – and then those eyes, infused with a sadness, that stared directly out from the frame and demanded attention.

“These eyes that saw me before I saw myself,” James said, his voice suffused with a sudden emotion.

Later, when the class had finished, I stood on Heytesbury Street and thanked James for his talk that morning. It was 2018 and I was in the lucky position of working as a poet at the time for The National Neighbourhood, an initiative of Dublin City Council Culture Company. My job was to visit schools, run poetry workshops and use the city of Dublin as a means to inspire young people to write new stories and poems.

In my efforts to encourage the students to imagine their own portraits of the city, I had the idea of introducing them to a real-life portrait artist. It was an idea that worked – and all down to James, who had been a winning combination of wit, energy, imagination and thoughtfulness when talking to the Synge Street CBS boys. But most moving of all was when he had held up the portrait he’d drawn of his beloved dead father and spoken about his eyes. The inner emotional world of the artist had been exposed in his words and something had shifted in us all. We suddenly realised the power of art – how it can touch us in a mysterious and unforgettable way.

That afternoon, as I watched James Hanley cycle back to his studio, his bag of objects wobbling on his back carrier, I noticed how the portrait, hanging on the handlebars and wrapped in paper, kept beating against his knee. Poems come when you least expect them to, and the sight of a son cycling the picture he’d drawn of his deceased father down the bumpy, narrow city street, stirred in me an enormous urge to record the empathy that was welling up inside. It was a portrait that his father, who had tragically died in 2011, never got to see, and I was determined that my poem should pay homage not just to the painter’s picture, but to his father too. And so began the title poem of my new, sixth collection of poems, The Painter on his Bike, to be launched this month by Dedalus Press in Poetry Ireland.

Other artists inspired me too in the writing of this book and the poems that came were insistent. They scribbled their way into my notebooks like demanding creatures. They formed themselves into a series of poems which were comprised of pared back two-line stanzas. One such poem was Solar Eclipse. I had been standing in Oscar Square park a few years ago, when a solar eclipse took place, casting my neighbourhood into instant darkness. I took fright and rushed across the road.

I had met the sculptor Janet Mullarney before and banged on her door. Luckily she was at home and she invited me into her kitchen. My eyes slowly adjusted to the brightness of the room, which was in stark contrast to the eerie outside. It was then I spotted a wonderful peacock which Janet had cut into the lino of her floor. She had been inspired by fifth-century mosaics that she had seen in Ravenna. Immediately I imagined the emerald and indigo bird, with its bright red eye like a fallen berry, flying from Italy to Ireland. It would arrive to shimmer on the artist’s kitchen floor, while outside the moon passed between the sun and the earth. When light returned again, I made my way home through the Tenters, knowing another new poem was in the making.

Poems about poets Dennis O’Driscoll and Helen Dunmore, the artist Martin Gale, the sculptor Rachel Joynt followed. A powerful performance that I attended by Martin Hayes and David Power in Borris, had me reaching for my pen again and a new poem, Postcard to a Piper, found its way into my collection too. The most recent poem in the book, completed just this September, considers what it must have been like to have been the mythical Eurydice – a woman eternally confined to the underworld because Orpheus had dared, against warning, to look back and lose her forever.

You are never quite certain how a poetry collection might turn out, what direction it might take. But just like the painter James Hanley, balancing the portrait of his father on his bike, I began to discern a sort of balancing of art and experience within the poems in the book. What mattered most to me was that the poems achieved a type of celebration of the life that I lived in – and so, family memories, elegies for lost friends and love poems for my husband Peter and daughter Freya are also integral to The Painter on his Bike. Ultimately, here are poems whose explicit wish is for the safe passage of others, for gatherings and regatherings, for the chance to “wake again to a hall/of light” and for life “to go on beyond this moment/ and yet because of this moment”.
Enda Wyley has written six collections of poetry and is a member of Aosdána. Her new book of poems, The Painter on his Bike, will be launched by Dedalus Press with Ross Thompson’s debut Threading the Light, on Tuesday, November 12th, at 6.30pm at Poetry Ireland, 11 Parnell Square East, Dublin 1. Music will be provided by the piper David Power.

The Painter on his Bike by Enda Wyley
for James Hanley

balances his father –
sketched in pencil –

wrapped in paper
on his handlebars.

As he cycles down
Heytesbury Street

the twist of string
around the frame

loosens for a second
catches in the wheel

the painter’s breath
caught too

by the sudden sight
of his dead father’s eyes.

They saw me
before I saw myself…

He stops at the kerb,
tugs at the twine, frees it

from the spokes, sets off
again, the bike wobbling,

bumping over
potholes and tramlines,

the picture beating
against his knee.

He is cycling
the portrait home.

And later, a fire lit,
the paper unbound –

Father, whose eyes
rise up, from the face