The Taiga Syndrome: A beguiling story of betrayal and pursuit 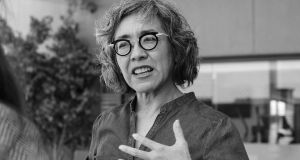 Cristina Rivera Garza: Through her powerful command of language, she eases the reader into her nightmarish fairytale

What do you do when you lose love? Do you let it go? Do you get over it? Do you wish the best for your former partner? Or do you hire a private detective to chase into the wilderness after your ex and her new lover? If you’re the spurned male of a Cristina Rivera Garza novel, this is the answer. The Taiga Syndrome is a beguiling, mind-bending take on the relentless pursuit of lost love. Part fairytale, part speculative noir novel, it follows an unnamed ex-detective as she searches for a couple that has fled to the far reaches of the earth. Employed by the woman’s husband, our narrator detective sets off on the trail into the wilderness of the taiga, a boreal forest characterised by high latitudes, freezing weather and coniferous trees.

Along for the ride is a male translator, who stalks the snowy landscape one step ahead of the detective, occasionally offering her his views on the world. One such insight, which becomes a heading of one of the book’s 23 sections, is: Women Think Only About Sex. It is a curious statement, challenged by the narrator, and later delved into more deeply. We come across sex in multiple guises: at the start and end of relationships, as a means to some surreal procreation, and for commercial gain in a dingy strip club: “Places where sex is sold are the same everywhere.”

Garza’s style can be sparse and startling, as with many opening lines of the various sections: “That they had lived there, they told me.” Elsewhere it is wonderfully poetic, dense as her boreal landscape: “Look at this: your knees. They are used for kneeling upon reality, also for crawling, terrified. You use them to sit on a lotus flower and say goodbye to the immensity.”

Through her powerful command of language, she eases the reader into her nightmarish fairytale. There is mystery upon mystery. We learn that her client’s first wife died in an accident some years earlier. As she processes this information, he interrupts to tell her it’s not a fairytale but a story about being in love. Her response shows her mettle: “‘Or being out of love,’ I corrected him.” More mystery surrounds the missing woman and her new lover: “She gave the impression of being unable to stop. As if she were falling.”

In this slippery gem of a book, it is hard to know who to trust, even the narrator. As she treks deeper into the taiga, she dutifully writes up her notes each evening for her client: “I would ask him to take into account that nothing had happened exactly as I claimed.”

Rivera Garza is an award-winning author, translator and critic, and the only two-time winner of the International Sor Juana Inés de la Cruz Prize. Originally written in Spanish, her works have been widely translated. Born in Mexico in 1964, she has lived in America since 1989 and is a professor at the University of Houston, Texas. The Taiga Syndrome is the second of her novels to be published in English, following The Iliac Crest last year. The eerie, agitating quality of both novels recalls the fiction of Argentine writer Norah Lange, particularly the impenetrable People in the Room. Closer to home, The Taiga Syndrome will resonate with fans of Sue Rainsford’s Follow Me To Ground, with both writers offering original explorations of death, desire and the body.

The setting is atmospheric – “its temperature, its flora, its fauna, its shades of green” – and frequently disconcerting.

Fairytales – the darker versions – run throughout The Taiga Syndrome. The stories of Hansel and Gretel and Little Red Riding Hood haunt the ex-detective’s quest: “Scholars of Hansel and Gretel argue that the original story by the Brothers Grimm was a warning against the brutality of life in the Middle Ages, a time characterised by a hunger and scarcity that with frequency, with terrorising frequency, led to infanticide.” In the original version we learn that it was actually the mother who persuaded the father to leave the children in the forest to starve, but the story was later sanitised by glorifying the mother figure and demonising a stepmother.

The book is translated with a wonderfully light touch by Suzanne Jill Levine and Aviva Kana, and the short sections have a compulsive quality, even as the reader feels lured into the taiga themselves. The setting is atmospheric – “its temperature, its flora, its fauna, its shades of green” – and frequently disconcerting. The syndrome of the title is explained: “Certain inhabitants of the taiga begin to suffer terrible anxiety attacks and make suicidal attempts to escape.” All this and more comes through in Rivera Garza’s expressive prose. From murderous lumberjacks, to astute wolves, to feral little boys, this is a short novel whose multiple stories stay in the memory long after reading.