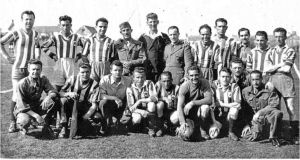 An Italian prisoner-of-war football team in the Forest of Dean, Gloucestershire. The referee is a local man, Harold Waltham

Talk of immigration, and immigrants, is never far from the news in post-Brexit Britain. But two generations ago, at the height of the second World War, immigration – from enemy territories, to boot – was both incredibly common and barely remarked upon.

Between 1939 and 1945, Britain was home to more than 400,000 prisoners of war from Italy, the Ukraine and Germany. They were housed in hundreds of camps around the country, with five sites in Northern Ireland.

Prisoners wore old uniforms with black patches sewn on the legs and backs – allegedly, morbidly, to be used as targets should a prisoner try to flee. In many camps, ardently pro-fascist captives were required to wear black armbands denoting their propensity to continue to “fight the war” from behind enemy lines.

Far from increasing hostility towards the Axis nations, this “foreign invasion” had the effect of enhancing mutual understanding and bringing out the best of the British

In practice, escape attempts were relatively uncommon. But in March 1945, in a plan that bears remarkable similarity to the Great Escape, a group of 56 Germans did abscond from a camp in south Wales. Sophie Jackson’s record of the time, Churchill’s Unexpected Guests, tells how the escapees had stockpiled food and provisions and built a 20-yard long tunnel whose entrance was hidden in an accommodation hut. There’s no evidence that anyone “borrowed” a motorbike, Steve McQueen style, but they certainly eluded police cordons and stole cars and bicycles to get as far away as they could. All were eventually recaptured.

For the most part, however, the prisoners were content with their version of British life, turning their camps into temporary homes, and sometimes building chapels and other memorials to life in their homelands. One group of Italians built a monument to Marconi which remained in situ until the early 1980s. The Geneva Convention ensured that POWs in all countries were treated fairly, receiving the same rations as ground troops, and there was a definite sense that German POWs should be looked after so that the German authorities had no reason to mistreat British prisoners in camps on German soil.

In order to impede any potential escapes, POWs were paid not in British currency but with “camp money”, paper and plastic facsimiles which they earned for undertaking camp labour. However, somewhat inevitably, a thriving alternate industry sprang up. Willi Bungart is a German POW who was captured aged 17 and spent four years in a number of British POW camps. He recalls making toys one Christmas to sell to British families, who they met whilst at work or by attending work. Church, which the POWs were allowed to attend alongside the English congregation, was particularly lucrative for such swaps.

Bungart’s memories of his time as a POW are largely positive; he was young and healthy, made friends and was treated well. His daughter, Sabine, writes that, she “got the impression that it was all a great adventure”. No need, then, for it to become a great escape.

POWs who were considered to be “benign” were given the opportunity to earn “proper” money by working outside the camps. They were paid a fair wage for this work and many took the opportunity to save for a future outside the camps. The prisoners worked alongside locals and “lumberjills” – members of the Women’s Timber Corps – bringing in the harvest and helping with the timber management: “None of us liked the sugar-beet harvest,” remembers Gloucestershire man Humphrey Phelps in his book on wartime life, “but the Italians talked and laughed as they worked and occasionally burst into song.”

Even local men and women whose loved ones were away fighting in the war and who were initially mistrustful of the “enemy” in their midst often found that this antipathy wore off once they’d spent some time working alongside POWs. It wasn’t uncommon for friendships to be struck up and for POWs to be invited into civilians’ homes for Christmas lunch. In Scotland, one farmer requested that the Italian POWs working on his farm be given permission to live in one of his outbuildings rather than have to make the long trek back to camp at antisocial hours.

In the Forest of Dean, in Gloucestershire, Italian POWs became a part of the community. The prisoners formed a football team which played in a local league, and were given the use of a local team’s ground for their matches rather than requiring they be played on their scrubbier parade grounds. The locals attending these matches were taken aback by the Italians’ habit of piping music across the pitch through a Tannoy. Many Italians forged lifelong bonds and for decades afterwards would visit local families whose generosity they remembered with fondness. Some even settled in Britain permanently.

Far from increasing hostility towards the Axis nations, this “foreign invasion” had the effect of enhancing mutual understanding and bringing out the best of the British. As Humphrey Phelps says, “Technically (the incomers) were enemies, but really they were our friends.” A sentiment that, in current times, we could all do well to hold dear.
Sarah Franklin lectures in publishing at Oxford Brookes, is the host of Short Stories Aloud and a judge for the Costa Short Story Award. Shelter by Sarah Franklin is published by Zaffre this week, at £12.99. It is 1944. Connie Granger must leave Coventry after her family home is blitzed, she must learn to survive alone, hiding a huge secret. She finds work with the Women’s Timber Corps in the Forest of Dean and soon starts to work as a lumberjill. It’s here that she meets Italian POW Seppe, who is haunted by his past. But in the forest camp, he finds a strange kind of freedom