‘The tight gag of place and times’: trauma in Inch Levels

People have often told me that Inch Levels’ most powerful effect for them was its revelation of the depth and effects of trauma, yet I never intended to write such a novel 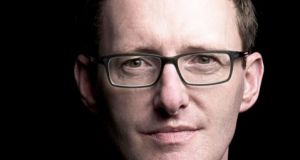 Neil Hegarty: we can help to control our destinies by means of our thoughts

Have you ever had a moment in your life where you felt that you could act to change it decisively? This is the moment on which Inch Levels hinges. Towards the end of the story, the protagonist Patrick Jackson – ill in hospital, the sands of his life now rapidly running out – acts to influence destiny. The great tragedy of his life is that he has never truly been a protagonist at all, never been able to do what was needful to direct his fate. Instead of making the choices that can channel a life, he has been like flotsam on a fast-flowing stream – as have other members of his family. The decisions have been made for him, long ago. Now, however, Patrick has one last chance.

People have often told me that the most powerful effect of Inch Levels for them was its revelation of the depth and the effects of trauma. A much-used word in our culture, and maybe even one that is now regarded in many quarters with suspicion, trauma remains a phenomenon that is little understood – and one which has profound resonance for our country’s culture, with its legacy of struggle and suffering. Certainly, many Irish people over a certain age will readily recognise just how completely guilt and silence can overwhelm and snare a life.

Many writers have stressed the necessity of allowing a deeper thread to emerge from their work, one that they perhaps had no knowledge of or no idea how to formulate

The astonishing realisation for me is that I never intended to write such a novel. Certain features of Inch Levels have remained constant from the beginning: the book was always set on the Irish border: in those varied landscapes of Derry and Inishowen that are my home place. The first drafts of the book, however, told a story set during the second World War – the Emergency – and dramatised the differences in these years on either side of the border, between an ostensibly tranquil Donegal, and a highly militarised Derry. It was only later that the shape of the final novel surfaced from the deep; only later that I realised that I had to write a larger story, one that encompassed a wider span of years, and across which my initial tale of war and peace must lie like a shadow, an ink-stain of trauma.

Many writers have stressed the necessity of allowing a deeper thread to emerge from their work, one that they perhaps had no knowledge of at first, or perhaps had no idea how to formulate. Once it does appear, a responsibility emerges with it: it became my task to show how trauma can lock a life into a particular trajectory, and how this in turn can ripple – or rip – through the lives of many other people, generation by generation. For it is not only the case that trauma can be stamped through a life, for a lifetime. Readers have remarked to me that this is a story with which they can identify because it shows how an initial trauma, dreadful in itself, can be multiplied in its intensity by the way in which it is handled. My task, as I saw it, was to show how an episode of trauma can indeed intensify, how it can effortlessly cross the generations, and lose nothing of its power and malignity.

In Inch Levels, this initial trauma is revealed towards the end of the story. In wartime Donegal, a young woman witnesses a scene that will scar the rest of her life. Her reaction, made in order to survive, is to dull her emotions, to fend them off: to move into trauma. And in doing so, she establishes a new shape for her life, and for many lives still to come.

I was able now to look at the history of Northern Ireland, the Troubles, the border, lives lived under shadow. I didn’t at first find it easy to write about such material

The book now stretched from the 1930s to the 1980s, and this addition of narrative breadth and depth also brought the tale closer to my own experience. Specifically, I was able now to look at the history of Northern Ireland, the Troubles, the border, lives lived under shadow. I didn’t at first find it easy to write about such material, but my memories of those times are so remarkably clear – the bomb blasts that caused the windows of our house to buckle and billow before our very eyes; the bristling military hardware to be ignored and blanked as we passed by; the blackened space, like a rotten tooth, of a bombed building that had been intact just the previous day – that they found their way on to the page in a form that was clearly right, and authentic. I read and reread other Northern writers – Heaney, of course, who wrote of “Northern reticence, the tight gag of place and times”; Deirdre Madden, whose descriptions of place and times are at once muted and intensely vivid; Colette Bryce, a Derry contemporary, whose own memories of bomb and blast as set down in her poetry echo mine, eerily – and saw a continuum of emotion, and careful words.

It was crucial, of course, for my characters to act as we all might act, should the cards of our lives fall in certain ways. I wanted to create men and women who behaved in ways that were recognisable and credible – and here, I drew on my consistent interest in how the human brain works: how we think, how we feel, what science can tell us about the firing of our neural pathways. In this fascinating and rapidly developing field, one incontrovertible fact emerges: we can help to control our destinies by means of our thoughts. If we think in a certain way – pessimistically, optimistically - then our brain will adapt itself accordingly, seeking out ways to turn our thoughts into reality. Our brains are infinitely plastic: what we want, they will work to provide.

When I look back on Inch Levels, I see a story that is tentatively optimistic – because change, though far from inevitable, is certainly possible

In Inch Levels, I wanted to show how trauma distorts this ability to think, imagine, act and create. Instead of imagining certain futures and outcomes, my characters move within tramlines that are laid narrowly, with little room for manoeuvre. Destinies are set – and it takes great energy and an extraordinary act of will to prise up these tramlines and cast them aside. Patrick Jackson manages it, however, with consequences that are potentially life-changing. This is why, when I look back on Inch Levels, I see a story that is tentatively optimistic – because change, though far from inevitable, is certainly possible.

I chose to include no epigraph for this book – though had I done so, it would have been a line from Michael Ondaatje’s novel In the Skin of a Lion:
“Trust me, this will take time but there is order here, very faint, very human.”
Inch Levels by Neil Hegarty is September’s Irish Times Book Club selection. Over the next four weeks we shall publish a series of articles by the book’s editor, Neil Belton, as well as writers and critics including Danielle McLaughlin, Andrea Carter, Caitriona O’Reilly, Lucy Collins and Nicholas Allen. The series culminates in an interview with Neil Hegarty conducted by Laura Slattery of The Irish Times at the Irish Writers Centre in Dublin’s Parnell Square on Thursday, September 28th, at 7.30pm. It will be recorded for a podcast which will be available from September 30th on irishtimes.com