The state of Britain: myths, lies and identity crises 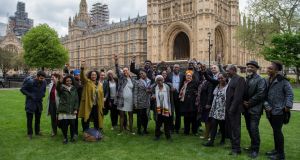 Members of the Windrush generation and their families with MPs after attending a meeting at the House of Commons in London. Photograph: Chris J Ratcliffe/Getty Images

Stig Abell. How Britain Really works: Understanding the Ideas and Institutions of a Nation. John Murray, £20.

What is going on in Britain? How – if at all – does the United Kingdom work these days? What is the legacy of the convoluted history of the disparate peoples and communities which make up these geopolitical realities? Akala, the musician, writer and activist, and Stig Abell, who is, and will probably remain, the only person to edit The Sun and The Times Literary Supplement, have written very different books which both try to explain the state “we” (the Brits, the people of the United Kingdom) are in.

Akala’s book is a memoir interspersed with reflections on history and society, as he maps his own life story onto the wider global currents that have determined the course of his life. The son of a Scottish mother who brought him up as a single parent in Camden, north-west London, and a Jamaican father, Akala was, by his own account, a forceful, articulate and confrontational youth who was acutely aware of the deprivation his family suffered. Falling behind at school because of his inability to fit in, Akala credits his intellectual development and, in particular, his acute awareness of race and class, to his mother’s wise decision to send him to African school where he learned about the legacies of empire. The decision brought racial awareness into the family home at an early age, which was not always comfortable for mother and son. It did, however, enable the young boy to realise the absurdity of a well-meaning but patronising teacher telling him on a school trip to the National Portrait Gallery that his people had been liberated by William Wilberforce.

Natives is not a book that pulls its punches but I did sometimes wonder whether Akala could have been even harder on the complacent blindness of those who refuse to acknowledge that not everything has been in their gift.

Akala was placed in special needs classes, drifted into gangs, carrying a knife for protection, before his career took off and he was able to make something of his considerable abilities (he was a gifted young mathematician; played in the West Ham youth team; and eventually achieved top grades at school). He writes with an impressive sweep on world affairs, and is especially good on why the legacy of empire should not be so complacently ignored. In a deftly amusing early interlude, “A Guide to Denial”, he points out that Jamaican immigrants to the UK left for a variety of reasons but “hatred of their home countries was not one of them”. After the recent Windrush scandal it’s a point that just has to be made. As Stuart Hall once noted, words cited in Stig Abell’s book, immigrants “are here because you were there”.

Akala fiercely and knowledgeably defends the educational records of black youths in Britain, attributing hostility to a racist culture of whiteness which has never been properly challenged. He is a careful and subtle thinker on class and is suspicious of attempts to blame the “white working class” for a litany of social ills, echoing Owen Jones’ powerful argument that class spite is a widely acceptable prejudice. Indeed the very use of the term “white working class” makes his point that too many people want to set categories of “race” and “class” against each other rather than thinking through the vicious structures which have been allowed to flourish at the expense of so many people. Natives is not always an easy read but it is a book bristling with intelligence and insight.

In form, at least, How Britain Works is a very different book. Stig Abell is an urbane, and often jaunty guide to modern Britain, in the mould of Bill Bryson. The central question he asks is how did we get here and where are we going? To answer these questions he has produced eight chapters on economics, politics, health, education, the military, law and order, the media, and identity.

Abell is eager to represent himself as an impartial and fair commentator and, throughout, he provides thoughtful explorations of each subject, giving the reader enough information to challenge his thinking.

His conclusions are a mixture of a respect for tradition and the iconoclastic.

He upholds the need for the rule of law and is largely sympathetic to the military, but has no time for organised religion and argues – rightly, I think – that decriminalising drug usage would be an enormous social benefit.

He is critical of private education and bewails its baleful influence on the social landscape of Britain, suggesting that the first step any reforming government should take is to abolish its charitable status. There is, as might be expected, a long and often insightful chapter on the media and the decline of the newspaper generated by the rise of the internet. As a result we have more “fake news”, often produced by people who complain about “fake news”, and journalists have given way to PR experts.

The chapter on identity supplements and supports the conclusions of Akala. Not only does Britain have a shameful history of racism which it constantly denies and rewrites, but there is a woeful amnesia about class and its corrosive effects on the majority of the population. Abell is good on “political correctness” which he sees as a price worth paying for eliminating vile prejudice. And, he argues, if Britain is less racist than it was in the past, then we still need to remember that it is a racist place.

Abell concludes his book on a much more hopeful note than Akala, but both agree that the future could go either way. Akala worries that we are more likely to witness increased inequality and bigotry than a democratisation of wealth and power. Abell argues that Britain is indeed a muddle, the result of a chaotic history, which has never been properly confronted. Radical change is possible, but not plausible, and, in any case, there is much good in British life anyway. Time will tell which of them is nearer the mark.