A century ago, Irish feminists fought to attend and report on rape trials and led demands that rape, often called ‘outrage’ in the press, be acknowledged by its name 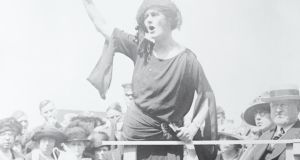 Constance Markievicz. Her socialist republicanism did not stop her collaboration with women who disagreed with her ideas about state sovereignty and economic organisation.

In this newspaper, Conor Gallagher reported the Belfast rape trial as “in terms of public interest…one of the largest in the country for many years”, citing the celebrity status of the sportsmen, the loathsome language on display by the accused, and recent feminist social media campaigns as factors attracting widespread attention. The trial’s coincidence with the centenary of women’s suffrage, which has invigorated contemporary feminist media campaigns, also raises astonishing parallels between contemporary activism and first-wave feminism’s #MeToo moment.

The most radical campaigners for women’s right to vote based their activism on what we would now describe as an intersectional politics. Upper-class and middle-class women who enjoyed the privilege of social respectability worked closely with impoverished and otherwise marginalised people to advocate for an almost total reconstruction of the public sphere. This included redressing injustices in the courts of law, the media, systems of education (inside and outside the home), and the reform of public and private discourses surrounding sex, sexual assault and consent.

Some women, including Constance Markievicz, understood social injustices to be the consequences of the British imperialist system. But Markievicz’s socialist republicanism did not isolate her from collaboration with women who disagreed with her ideas about state sovereignty and economic organisation. The unexpectedly high degree of co-operation between women of differing political opinions is most visible in the pages of the short-lived Irish Citizen, the feminist newspaper that exemplifies the democratising effects of the early 20th century’s media revolution.

Drawing parallels between the early 20th century and the present, it is crucial to note the fraught and remarkably brief history of “rape” and “consent” as discursive categories. In Rape: a History from 1860 to the Present, Joanna Bourke shows how these discourses emerged only in the late 19th century. In light of Bourke’s history, Irish feminists were clearly at the forefront in their demands that rape be acknowledged by its name in the mainstream press, that women’s anonymity be protected, and that popular opinions presuming that working-class women and children were given to sexual licentiousness be debunked.

The Irish Citizen’s journalists advocated the recognition of rape as a severe and distinct crime. This advocacy was part of a larger feminist programme to liberate women from a material condition and to recognise their full humanity. The widespread use of euphemism, these feminists argued, made it difficult for rape to be documented and prosecuted. In the early 20th century, rape was frequently described by the word “outrage”.

Gemma Clark’s Everyday Violence in the Irish Civil War gives examples of men and women who made recourse to the term. One woman from the Protestant landholding class described being assaulted: “I was outraged by different men in turn, one after the other [….]I was once more outraged by this man. I believe I was outraged altogether on eight or nine different occasions.” Another testimony, by a man whose 75-year-old wife was assaulted, testified, “she will never recover from the outrage committed on her”. Clark makes it clear that the word “outrage” suggests rape, but as late as 1922 the word was also being used to describe “‘agrarian outrages’ (such as animal maiming).”

The statements documented by Clark are drawn chiefly from compensation claims filed by landholders whose property was destroyed or damaged during the Civil War. The source and the euphemism therefore underscore the double-bind of the term “outrage”: on one hand, it describes the effrontery of the assailant’s violation of the boundaries of social class; on the other, it classifies the assaulted person alongside other forms of property, including animals.

The Irish Citizen argued for the recognition of rape as a severe and distinct crime. An article entitled “Women’s Right”, published in August 1914, asked: “Is the burning of a house to be compared with this? [….]If a man commits murder is he allowed to go free because it is the first time he has perpetrated the crime? These offences are far nearer the criminality of murder than they are to the criminality of a lad who has raided a neighbour’s orchard or stolen a loaf out of a baker’s shop. It is almost beyond belief that in recent assizes two old men who pleaded guilty to ruining little girls were let off on the ground that if convicted they would lose their old-age pensions. We respectfully submit that the pension is not intended to be a provision for the most dastardly crime.”

The article was the text of a sermon delivered at Belmont Church, Belfast, by Rev Dr MacDermott, who was a former Moderator of the Presbyterian Assembly, which accounts for the use of “ruining” and “most dastardly crime” as euphemism for a word that, censured by the mainstream press, could hardly be uttered from the pulpit. Most striking in light of recent events is the way that the article highlights how rape was generally equated to petty criminality, “laddish behaviour”, not dissimilarly to the recent excuse provided by the defence that the unsavoury language of the accused was merely “juvenile bravado”.

The Watching the Courts Committee, which reported its findings in the Citizen, extended the feminist alternative media’s discursive advocacy to practical advocacy. Louise Ryan, the first scholar to document the work of the committee, has shown how these women had to fight to be present at trials dealing with cases of rape and paedophilia. In one case, brought to trial in January 1915 and reported in the Citizen, an ex-sergeant of the Connaught Rangers who was currently “employed at the Royal Barracks” was accused of “enticing” two girls, aged 9 and 13, and sexually assaulting the 9-year-old while the 13-year old stood witness. The younger girl was infected with gonorrhoea as a result. A physician testified that the accused “could have infected” the child, but the jury was instructed that they could only find a verdict for “attempted (indecent) assault” rather than the verdict of “criminal assault” which was justified in light of the physician’s evidence.

During the jury’s deliberations, the judge inquired about penalties authorised by Parliament – not in order to give the maximum but to ascertain the minimum penalty so that the accused’s army pension would not be affected. The Irish Citizen’s documentation of this case, among others, indicts public institutions for the impulse to protect male privilege, no matter how detestable the charge: an impulse that loiters in our contemporary judicial system.
Lauren Arrington will be giving a keynote address at Interrogating Markievicz, a conference on gender, class and activism, hosted in association with UCD Gender Studies at Richmond Barracks on May 11th and 12th. Booking essential: eventbrite.ie