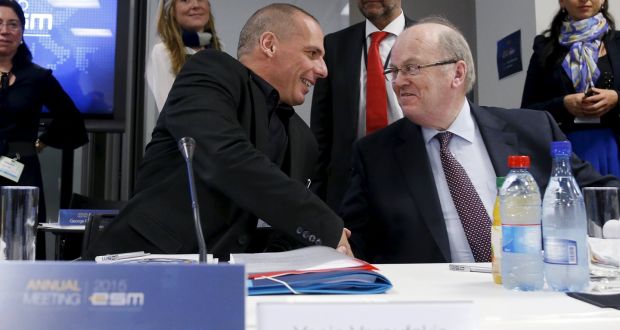 Book Title:
Talking To My Daughter About The Economy: A Brief History of Capitalism

However, if this is difficult for family weddings it has the potential to be utterly fraught when governments gather together. Family tiffs pale in comparison to the tension between adjacent prime ministers.

The European Union depends on such gatherings. Leaders of governments, ministers and diplomats gather regularly to thrash out issues. These occasions reach a crescendo after hours of talks, frequently late at night or early in the morning.

With so much going on, the seating plan is simple. Your location in the alphabet and whether your country hosts, or is about to host, the presidency of the European Union determine where you are physically located. Ireland is frequently located between Croatia and Greece.

This meant that Michael Noonan sat close to his Greek counterpart, Yanis Varoufakis, during some extraordinarily difficult meetings. Relations were difficult.

I therefore approached Talking to My Daughter About the Economy, Varoufakis’s new book, with some reservations.

Varoufakis may dazzle in the auditorium or in the many Irish festivals and debates in which he participates. However, he was hopelessly out of his depth as a finance minister. When the going got tough, he fled for the Greek islands. Despite this, or maybe because of this, he has continued to prosper as a writer and critic. The same cannot be said of those he was elected to serve.

My reservations grew with the author’s admission that he wrote this book in nine days “without a plan or provisional table of contents or blueprint to guide me”. This was, I thought, consistent with his time in government.

However, such misgivings were unfounded. True, the book is uneven, let down by threadbare conclusions. But the balance of this slim volume, penned to his teenaged daughter, is a stimulating and elegant perspective on market economies. It is accessible but not simplistic.

Varoufakis begins his analysis by arguing that the ability to communicate, in addition to agricultural surpluses, spurred the development of the nation state and nascent economies. Gradually, societies that contained markets became market economies due to the increased role of capital (such as tools and factories) and the role of labour in producing goods.

This approach is used to understand the development of the Industrial Revolution in 18th-century Britain. Debt is central: “the rise of profit as a major incentive for people to do things came hand in hand with a new role for debt”.

Credit allows workers to be paid and raw materials and tools to be purchased before the entrepreneur is rewarded. It is the “primary factor and the essential lubricant of the production process”.

However, this primacy has darker consequences. The unmanageable growth of debt can also disrupt economies and ruin societies. The author argues that: “the instability that bankers create in market societies can be reduced but it can never be entirely eradicated for the simple reason that the economy is fuelled by the thing they provide: debt”.

Varoufakis's abdication of responsibility might prove to be fruitful after all

A superb chapter on banking uses the metaphor of time travel to explain the role and dangers of banking in supporting entrepreneurship and economic growth. Other passages in the book draw on Star Trek, Frankenstein and Oedipus.

It feels forced at times, with the author working a bit too hard to wow the reader with the breadth of his cultural tastes. However, it works. Familiar concepts are examined through a fresh perspective.

A particular example of this is the analysis of the role of public debt. It is the “ghost in the machine” that allows market societies to function.

As Minister for Finance, I review the performance of our government bonds every morning. The rhythm of bond yields, their rise and fall, provides the background music to many of the decisions that I make on behalf of our country and our people.

Maybe this is the reason I found the section on public debt somewhat poetic. Even if this dimension is not evident to other readers, the lucidity of the explanation will be.

During his tenure as minister for finance, Varoufakis demanded debt writedowns for Greece and Europe. This alleged solution makes a surprisingly brief appearance before he tackles the consequences of automation for labour and work.

The conclusions of this work are the most disappointing. A call to democratise the supply of money is baffling in its brevity. An exhortation for the creation of an “authentic democracy” and the collective ownership of technology and the means of production sits very poorly alongside his appreciation of entrepreneurship and individual initiative.

My utter disagreement here is to be expected. What might be less expected is my recommendation of this book. It is provocative and stylish. His abdication of responsibility might prove to be fruitful after all.