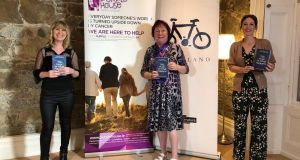 Tanya Farrelly, Veronica O’Leary of Purple House and and Aoife Walsh of New Island launch The Music of What Happens: The Purple House Anthology of New Irish Writing

In 2018, I began facilitating a creative writing course at Purple House for survivors of and those being treated for cancer. I’d discovered the charity the previous year in my capacity as director of Bray Literary Festival when I was actively seeking a local charity whom we might fundraise for during our events.

What I found was a much-needed community-based Cancer Support Centre. A centre that offered free counselling services and complementary therapies to those whose lives have been affected by cancer – and let’s face it, there are very few who have not been affected either through their own illness or that of a loved one.

When Veronica, founder and director of services at Purple House, called me aside one evening to ask if I thought it would be possible to publish a book to celebrate the centre’s 30th anniversary, I became really excited. That same evening, enraptured by thoughts of curating an anthology that would include new writing by many of our best living authors and poets, I set to contacting writers whose work I admire. This for me has been the real joy of this project – commissioning new work from so many established authors along with new talent discovered among the writers’ group, which I continue to facilitate, in Purple House.

There is no set theme to The Music of What Happens – as a writer, I find themes often strangle creativity. Yet, going through the submissions as they came in, I began to see common themes emerge and I started, rather madly, to match pieces of poetry with what I saw as companion pieces of prose, and these pairings fell into place quite organically. Here I will attempt to give readers a glimpse of some of the themes that have emerged and how they been twinned for the anthology.

Music is at the heart of Anne Tannam’s atmospheric poem A Friday Night in January, in which a woman cycles to a basement gig in Dublin. She describes “the muffled thrum of music, urgent and pulsing,/ pushing you through doors into/ a teeming crowd swaying in their seats…” and then later cycling home: “…on the final stretch of a hushed road/ an unexpected encore:/ a fox appears on the footpath ahead… the music of her movements a song -/ in the back of your throat…”

In her essay Dress Code, Ann Marie Byrne also focuses on music, recalling a night in the Screen on the Green in Islington when she locked herself in the toilets in order to gatecrash a secret Sex Pistols gig taking place after hours in the cinema.

In Adam Wyeth’s fabular poem, The Great Friend, a scholar strikes up and then mourns the loss of a friendship based primarily on intellect: “…the two talked and became/ locked in an endless stream of dialogue./ Inseparable, they spoke for days without human need – / like two musicians riffing, each one taking over where the other left off in a state of pure discovery.”

Meanwhile, knowledge or, more accurately, pedantry spells the ruin of a relationship in David Butler’s story The Black Eye: “She failed to understand my visceral abhorrence at the proliferation of apostrophes in shop signs, an indifference I failed to understand given that she worked as an EFL teacher.”

In Edward O’Dwyer’s poem The Ghosts Next Door a young couple are kept awake by the amorous actions of their dead neighbours. While they talk “about bills that need paying,/ and how the kids aren’t doing so well at school,/ and how the dog’s infection has come back…/ [their neighbours] are making love, all their moans/ high and haunting” while they “don’t have the time nor the energy” for sex. The supernatural theme is continued in Rosemary Jenkinson’s story The Entrancement when the protagonist, a magazine editor, is visited by a Japanese man: “a strange-looking character with a shaven head… [and] a pale cadaverous face…” who insists upon her hearing his unsettling tale about Butoh or the Dance of Darkness “that came from peasant rites in the villages, centuries ago”.

Fatherhood is explored in both Degrees of Separation, a poem by Maurice Devitt, and Reuben, a story by John O’Donnell, whose collection Almost the Same Blue (Doire Press) was published to critical acclaim earlier this year. In the former, a broken-hearted and resentful dad treasures the fleeting moments he gets to spend with his son: “Today it’s your turn to walk/ your son to school, stand/ on the step in the mizzling dark,/like a paperboy waiting to be paid…”

Donie, the protagonist of Reuben, one of the stand-out stories in the anthology, fares no better when he is forced to bear the tragic consequences of accidentally injuring both his wife and autistic son. “I wasn’t trying to hurt him; I was just trying to get him to let go of those spoons and give us all a minute’s peace. But he started screaming and trying to twist out of my grip, and that’s how he hit his head off the leg of the table.”

In Claddagh Ring, poet Nessa O’Mahony ponders the relationships between those bound by love, blood and the symbolic ring with its “…two hands [AnD] one heart.” A Reflection on love, ageing, sickness and inheritance, this short poignant poem is affective in its brevity: “Their daughter wears it now,/ heart inward on the middle finger to show she’s taken,/ that two hands/ grasped hers tightly once, loosely later,/ her heart crowned with love.”

Likewise, in The Way the Light Falls, an extract from Catherine Dunne, the protagonist reflects on her Irish Cypriot heritage as she examines a patchwork quilt made by her mother. The quilt, she says, is “a kind of symbolic record of our family history… Each square represents something particular about those who came before us. Here is our Aiya Melina’s favourite flower: oleander, pink and luscious and in full bloom. Here’s our great-grandfather’s farmland, represented by orange groves…” Dunne’s rich prose is a joy to the literary palate.

These are just some of the themes in this glorious collection, which I hope will give readers a flavour of the book. I know I speak for myself, Purple House and New Island when I offer heartfelt thanks to the 53 writers who gave their time, their creativity and ultimately their work to make this the unique collection it is.

The Music of What Happens is now available in all book shops or directly from Purple House. The launch will be broadcast on Bray Literary Festival’s YouTube channel this Friday, September 25th at 7.30pm with readings by some of the contributors.