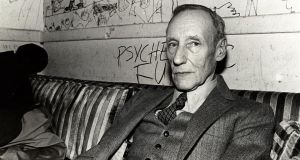 William Burroughs: He often spoke of the Ugly Spirit, a malevolent force at work in his life, which consciously or subconsciously orchestrated catastrophic events. Photograph: Paul Natkin/WireImage

Scan the newsfeed and you’d be forgiven for thinking William S Burroughs, the Beat writer whose name became synonymous with all things avant-garde, paranoid and transgressive, didn’t so much predict the present age as create it.

We live in a media landscape infested with metaphorical and actual viruses, the non-linear war on truth, politics as theatre of the absurd. The 21st century has turned out so explicitly Burroughsian it’s downright uncomfortable. Even his infamous cut-up methodology – randomly shredding and recombining sampled texts, adopted by everyone from Bowie to Kurt Cobain to the Disposable Heroes of Hiphoprisy – seems of the moment.

Burroughs saw literary and audio collaging as a form of occult divination. When he wrote, “Cut-ups allow the future to leak through”, he might have been forecasting the meme-addled ADD sensibility of the modern digiverse.

So an appropriate time then for Washington DC-based journalist Casey Rae to publish William S Burroughs and the Cult of Rock ’n’ Roll, a book that maps the Naked Lunch author’s influence on generations of rock musicians. Burroughs contained multitudes: in this book he manifests as a shapeshifting Zelig lurking over the shoulders of Dylan, McCartney, Jimmy Page, Patti Smith, Nirvana, U2 and more.

“I had this revelation as I was writing it,” Rae says, speaking via Zoom, “that the dystopia we’re experiencing corresponds to this Burroughsian idea of control, small units of information that can be weaponised for authoritarian purposes. Burroughs is an interesting character because he’s a product of the United States midwestern upper class. He didn’t deny that Waspy heritage at all; he benefited from it. He received a fairly generous monthly stipend from his parents, and so he got to globetrot on the very establishment that he sought to undermine.

“But there is a sort of 20th-century Nostradamus aspect of this. When you and I were growing up, we had maybe one, two or three channels. In the United States we had three broadcast networks, the local newspaper, the local radio station, and that was the media expanse. And so a lot of us were driven to undermine culture as a means to investigate beyond these channels. We had a very vibrant and active underground. In the 1990s you had zine publishing, before that tape trading and so forth.

“But there’s a precipice we seem to have fallen off as a result of – an academic term – the disintermediation of those conduits of information. [There are] no real gatekeepers to safeguard things like veracity, common notions of truth. That looks a lot like Burroughs’s most terrifying notions of control, that tiny units of information, memes, nuggets of tailored persuasion, communicated electronically, can be weaponised by nefarious shadowy forces. And so that’s the queasy feeling that we have when we read Burroughs’s books in the West at this time.”

Burroughs’s influence vapourises genre, from The Beatles’ sound collages to pre-punk icons such as Iggy Pop and The Velvet Underground. The 1971 novel The Wild Boys provided a blueprint for Bowie’s Martian juvenile delinquents, while the Nova Convention, a celebration of Burroughs’s work staged in New York in 1978, featured Laurie Anderson, John Cage, Philip Glass and Blondie among others. Burroughs’s sensibility, like JG Ballard’s, later cast a long, lean shadow on post-punk, industrial and electro acts such as Joy Division and Throbbing Gristle.

“In music culture at that period, you have this tremendous exchange of ideas between an American from a previous generation and a new generation of UK and British Isles folks,” Rae considers. “If you’re thinking about Burroughs and Ballard, you’re getting key influences that are below the radar but nonetheless are wildly transformative.

“I think one of the points of commonality that Burroughs has with these musicians is that they’re all searching for radical points of departure from the establishment. For Burroughs it was something called control. Control is a metaphor – you can’t drill it down to a single concept or perspective.

“We experience oppression in a lot of different ways, and sometimes it’s the oppression of our own minds. I think Burroughs was trying to escape that. He had a personal history that was chequered and deeply scarring – he shot his wife Joan Vollmer, it was ruled an accident – but also his son [William Burroughs III died of alcohol-related causes in 1981 at the age of 33]. That’s a family of generational trauma that he was trying to escape. So in his universe, control is experienced at this deeply intimate level, his own psyche.”

Burroughs often spoke of the Ugly Spirit, a malevolent force at work in his life, which consciously or subconsciously orchestrated catastrophic events such as the drunken William Tell routine that resulted in his wife’s death. In almost every Beat biography he comes across as a lonely, haunted, dangerous figure.

“People who interacted with him perceived a sort of alien quality,” Rae confirms. “In researching and writing this book I was fortunate to speak with James Grauerholz, who was Burroughs’s literary executor throughout his life, and even after his death, and James could see it from both sides. He was with him at that intimate everyday level, but he also got to see how all of these people responded, and he did confirm that there was a sort of alien otherness to Burroughs.

“He was extremely gracious and had the midwestern manners and was genuinely interested in what others had to say, the type of person that you would want at a dinner party with other fascinating figures like Lou Reed or whoever. But that dark aspect, that Ugly Spirit, it feels like a clammy thing that he can’t escape, like a mildewed overcoat; you just desperately want it off your skin.

“He took great experimental steps to remove that, including everything from a flirtation with Scientology to a lifelong struggle with heroin and opiate addiction. The thing that I think Burroughs was trying to get across, and sometimes is missed amid the scalding satire and the centipede ejaculations, is that this is like a penal colony, and there’s only one way out, and that’s oblivion. That’s a kind of darkness that, if it’s not outright nihilism, it’s a kissing cousin.”

Several years ago I spoke to the novelist William Gibson about Burroughs, and he said he believed that in deep time the writer might come to be remembered mainly as a spoken word artist. Burroughs was a magnetic performer (see his classic 1981 Saturday Night Live appearance, or Gus Van Sant’s film of his Thanksgiving Prayer, or the album Dead City Radio, which featured John Cale and Sonic Youth among others). His phrasing was unmistakable. He could upstage rock bands with just his voice.

“That’s really important, and I think that has attracted more musicians than anything,” Rae concludes. “If it was just like trying to parse Naked Lunch, then maybe the trail would have grown cold, but you have this tremendous library of esoterica rendered by the man in his singular voice, and it’s transfixing, it’s mesmerising, and I think that William Gibson is spot on there. It represents how modern culture relates to media in a way that is different than any previous century’s literature. Burroughs is already speaking in hypnotic soundbites. When rendered through his voicebox it becomes mesmeric.”

Plus, there was the cognitive dissonance of seeing this cadaverous-looking old geezer in a suit and fedora leaning on a cane and drawling on about Mugwump semen, or Dr Benway performing heart surgery with a toilet plunger.

“Well, like any other high-level guru whose ultimate objective is to wake people up to non-duality, they will use these types of devices in order to explode your mind. It’s an actual technique!”

William S Burroughs and the Cult of Rock ’n’ Roll is out now, published by White Rabbit