The long, cold shadow of slavery

Esi Edugyan talks about her novel, 'Washington Black', set around a 19th-century plantation 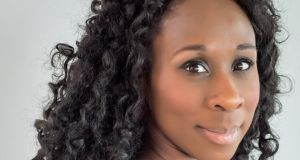 Esi Edugyan: “With any historical novel, the language of that era has to be reflected in the text. You can’t sanitise language.”

The word that is possibly the most controversial in the entire English language first appears on page 11 of Esi Edugyan’s new novel, Washington Black, which is on the Booker longlist. It turns up frequently after that. It’s a word the president of the United States has been accused of uttering in outtakes of his former reality show, The Apprentice. It’s a word that demonstrates the utter power and cruelty of language, because it is never used in ordinary conversation without controversy. As thus, it is a word frequently used only with the sole purpose of provoking deep insult and inciting controversy.

Edugyan is talking to me about her novel on the phone from her home in Victoria, British Columbia. She was born in Canada to parents who had immigrated from Ghana. “I will say it is obviously a very charged and painful word for many people – myself included – but there was no way to write a novel about plantation life without using it. With any historical novel, the language of that era has to be reflected in the text,” she says. “You can’t sanitise language. It is one of the most shocking words in the canon. It was an everyday word in a plantation in the 1830s, but it is beyond belief that it is language used by an American president in 2018.”

It was an everyday word in a plantation in the 1830s, but it is beyond belief it is language used by an American president in 2018

Washington Black, an epic historical novel, opens in the 1830s, on a sugar plantation in Barbados. The main character, Washington Black, is a field slave, and a child at the time the novel begins. He is chosen to be a personal servant to one of the two British-born brothers who own the plantation, and thus begins a non-stop narrative that covers continents, coincidences and invented contraptions for the rest of its 400-plus pages.

It’s Edugyan’s third novel, and the second to make it to the Booker longlist. Her previous novel, Half-Blood Blues, made it to the Booker shortlist in 2011. Her first child was only 10 weeks old at the time, but it did not deter the family from flying to London for the ceremony. Edugyan’s husband, Steven Price, is also a writer – a novelist and poet.

“It was wonderful, but stressful,” she says, of the awards ceremony, which was shown live on television. In a nod to the Oscars, cameras zoomed in on the faces of the nominees as they awaited the results. While actors are used to public attention, not to mention being filmed, most writers are not. Edugyan did not know until the live announcement who had won. The prize was won that year by Julian Barnes for The Sense of an Ending.

There is some beautiful use of language in her novel, written with a poet’s sensibility. These are three random examples.

“A muscle in my throat fluttered, as if I had swallowed a moth.”

“The feeling of paper in my hands . . . like compressed dust.”

“He had never struck me, but the possibility floated between us like a thread of music.”

“I studied poetry at college,” she says. “I feel like I have got the syntax of poetry as part of my make-up as a writer.”

Washington Black took her almost four years to write. She drafts and redrafts and drafts again. There was another novel along the way, which she considered she had finished but was unable to get published. Her husband, who is also a close reader of her work, suggested that it was because it wasn’t actually finished: it was still a draft.

“He taught at the University of Victoria for a number of years,” she says. “Having taught so much, his editorial eye is fantastic. He feels it was a book that was abandoned, but the material is not of interest to me anymore, which is why I don’t want to go back to it.”

Was it difficult to have her husband critique a novel which then did not get published? “He did give me some negative feedback, but it was fine, because we met when we were students on a writing programme,” she says. “And in all of these programmes, you have to take criticism, and find out how you work.”

Cultural appropriation is a much-discussed topic of late. The most recent high-profile example was the public criticism of British-born chef Jamie Oliver for his “jerk rice” recipe. “I’m just wondering do you know what Jamaican jerk actually is?” British MP Dawn Butler, the daughter of Jamaican parents, asked him on Twitter. “It’s not just a word you put before stuff to sell products. Your jerk rice is not OK. This appropriation from Jamaica needs to stop.”

Author Lionel Shriver caused international debate and controversy at the Brisbane Writers Festival in 2016 as a result of her keynote address. In her speech, she made it clear that she believed the accusation of cultural appropriation to writers who write about cultures other than their own was utterly irrelevant and political correctness gone quite mad. Writers from minority cultures took great exception to hearing this view from a white writer. It’s an ongoing debate, and not one restricted to literature. It applies to music, fashion and several other areas of culture, including food, as evidenced by the calling-out of Oliver’s recipe for seasoned Jamaican rice.

What are Edugyan’s views on this debate? “It is a very complicated issue,” she says carefully. “From my perspective, I know that there are so many historical wrongs that have been perpetrated against us and some of them run very deep. So for anybody to write about it who does not have that background or that experience is complicated: to write about something that doesn’t correlate to your own experience. You should think long and hard before you take that on.”

To write about something that doesn’t correlate to your own experience. You should think long and hard before you take that on

Is fiction not fiction, I ask her? Does everything a writer writes have to come from some element of lived experience? What happened to imagination, and invention? I’m a white journalist and find myself actually nervous of giving offence by asking these questions, which is probably telling of something in itself. We’re on the phone, so I can’t see Edugyan’s expression, but there is a pause and a hesitation before she replies.

She explains that to a person of colour, reading fiction about people of colour and their culture written by a person not from that culture –and usually white – is “very problematic. Because those writers come from a culture of people who had been the oppressors in the past. This is something we really need to be looking at and discussing. I think it is invaluable to be having these conversations. A huge part of the art of fiction is the imparting of empathy, and for readers to be able to have that connection with the character where a different way of life and living is shown to them.” The creation of such empathy is not going to have the same authenticity, Edugyan suggests, if written by a person from a different culture to the one being portrayed in the novel.

The controversial word that is threaded throughout Washington Black punched this reader in the eye every time it appeared. But apart from the fact it is the historically correct word to use in the context of a novel partly set in an early 19th-century sugar plantation, there is nothing gratuitous about it. If anyone has the right to use this word, it’s a writer such as Edugyan, who has had it spoken to her face, who has lived the experience of racism, and who represents a culture who knows when they use this word, it means something else. Unlike when, for instance, President Donald Trump allegedly says it. Words are powerful, and political, and Esi Edugyan knows this.