Two blow-ins in Ballinasloe and the creation of ‘Becoming Belle’ 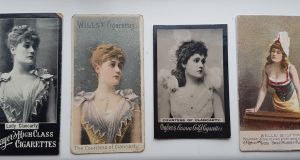 I pass a man on my walk through Ballinasloe, the east Galway town where I live. ‘Hello,’ I say. He smiles. ‘How are you getting on?’ he replies, in his tar-heavy burr, and I don’t have the wit or the presence to answer him.

Not that the question really requires a response, anyway, that’s just how people greet each other here: ‘Are you well?’ ‘How’s the form?’

A German friend, on being asked on a Galway street, ‘How’s it going?’ made the mistake of stopping to say exactly how things were with him and was amazed when his kind questioner cut him short and walked away. He quickly learnt the art of the friendly, long-winded, Galway hello.

In many ways I don’t belong here in Ballinasloe. I’ve lived here for 13 years, and I have great love for the place, but I’m not of here. My home lies 90 miles away in Dublin and yet, now, here is where I call home.

But I am, and probably always will be, a blow-in in this town, just as the heroine of my new novel, Becoming Belle, was in her time. Isabel (Belle) Bilton, like me, came from elsewhere and, for 15 years, made this place her home.

After a romance of mere weeks, Belle eloped with William and the groom’s father promptly set about destroying the union

In 1891, Belle blew into Ballinasloe as the brand new Countess of Clancarty. She was a scandalous woman: a music hall actress who had had a baby out of wedlock with an American conman before meeting her husband, William, Viscount Dunlo of Ballinasloe.

When the pair eloped and married, the viscount’s father packed his son off to Australia and, accusing Belle of adultery, began divorce proceedings against her, without her new husband’s knowledge. Even for the litigious Victorian era, this was a juicy scandal, made all the more interesting in Ireland for its connection to the Galway-based Clancartys.

Ballinasloe is a handsome market town on the easternmost edge of Galway, bordered snugly by counties Roscommon and Offaly. When Belle Bilton moved here as the newest member of the Clancarty clan, she and her husband took up residence at Garbally Court, a late Georgian era mansion with 11 grand windows across its façade and a central portico for elegant balance. The house stood on several thousand acres and, despite the Earl of Clancarty’s anger at his son’s imprudent marriage, and some legal tussling, William inherited the estate on his father’s death.

I moved to Ballinasloe in 2005 and, in researching the history of the area, I came across the story of Lady Clancarty, aka Belle Bilton, the beautiful actress and daughter of a Hampshire artillery sergeant who lived, eventually, in Ballinasloe.

My novel follows Belle over the four years of her first move to London to dance at the Empire Theatre; through her unruliest times as fallen woman and new bride, separated from her husband; and on to her life in Galway.

The bohemian world she embraced in London presented many challenges to Belle, but she was a woman who defied societal norms and lived life very much on her own terms. Less than a year after her out-of-wedlock son was born, Belle met 20-year-old old William Le Poer Trench, the Viscount Dunlo, who lived between his home in Ballinasloe and London. After a romance of mere weeks, Belle eloped with William and the groom’s father promptly set about destroying the union.

When I first heard of Belle, I became fascinated with the notion of a beautiful young actress swapping the delights of London for life in rural Ireland and, by all accounts, thriving.

Initially, I wrote a poem about Belle – a fairly poor villanelle. The artists’ collective I’m a member of in Ballinasloe – Group 8 – did a joint project on Garbally and its land. For that I wrote a flash fiction in Belle’s voice. But Belle Bilton demanded a bigger canvas.

Passing her grave on my daily walk, in the grounds of St John’s Church, I used always greet her – ‘Hello, Belle, how are you getting on?’ – and I’d wonder about the series of events that brought her to Ballinasloe and that became the story I was interested in telling.

Most of the known facts about Belle pertain to the divorce case and so I had to make decisions about the whys and wherefores of her choices around fostering her son and marrying William.

As I researched Belle, I gathered ephemera: cigarette cards featuring Belle from Guinea Golds and Wills’s; a cabinet card with the caption ‘Lady Dunlo’ by society photographer Alexander Bassano; a carte de visite depicting a risqué, corseted Belle – she tried to suppress a similar image by breaking the negative; and a cigarette card for Player’s showing Garbally Court.

When she met one of her tenants or workers at Garbally, she greeted them with a friendly hello and stopped to ask them how they were getting on

Part of my research involved going to Aldershot to see where Belle lived as a child. I also went to the National Archives at Kew in London to look at the infamous divorce petition and the couple’s marriage certificate. And I went to the National Portrait Gallery archives to see photos of Belle that I hadn’t seen before.

All of this research adds excitement and riches to the writing of historical fiction; I’m fast concluding that I write biographical fiction purely to indulge my love of research – I love the chasing down of facts and the intricate embroidery of them into the fabric of a novel. A life is not a story but some people’s lives – like Belle’s – have enough story in them to beg for a narrative to be woven around them.

By all accounts, Belle thrived in Ballinasloe; she was well-liked by the townspeople and she threw popular picnics on the lawn at Garbally. She once invited more than 60 schoolchildren to her home and gave each of them several pieces of fruit as parting gifts. Her inclusion in the close-knit Anglo-Irish society may have been another matter. Mark Bence-Jones reports that Belle was ‘never really accepted by the Ascendancy world’.

Belle’s Galway home survived the deliberate destruction of many of the houses of Irish gentry during the Civil War in 1922-23. Belle and William were the last earl and countess to occupy Garbally; Belle died there of cancer at 39 years of age. The estate was sold to the Catholic Church and is now a boys’ secondary school.

I drive through its wooded grounds, watching the changing seasons and thinking of Belle, when I bring my son to school there. She would have daily walked the woods and trails that the schoolboys and general population of Ballinasloe now enjoy and, no doubt, when she met one of her tenants or workers at Garbally, she greeted them with a friendly hello and stopped to ask them how they were getting on.
Becoming Belle by Nuala O’Connor is published by Piatkus on September 6th, at £13.99 (€15.56)