The Comeraghs in poems and photos

Mark Roper and Paddy Dwan overcame a broken neck, cancer and a deadly virus to finish the book 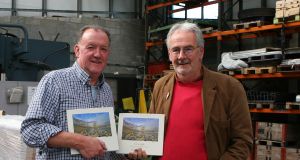 The Comeragh Mountains in Co Waterford are renowned for their dramatic ice-gouged coums and lakes – the word Comeragh means “abounding in hollows and river confluences”. Many stories have arisen in these wet and burly mountains. They were often used as a hideout. Here Lackendarra Jim lived alone in a cave, for some 40 years, after traumatic experience in the first World War. Crotty’s Rock is named for William Crotty, the 18th-century highwayman who conducted his raids from another cave. The West Waterford Flying Column kept themselves safe and kept arms and prisoners here.

For the last five years I have been working with Waterford photographer Paddy Dwan on a book about the mountains. Comeragh: Mountain, Coum, River, Rumour, was launched in Waterford on September 29th by the actor Carrie Crowley. The book contains 150 colour photos; the accompanying text is a mix of history, natural history, culture, individual experiences, Irish language poetry, folklore and legend.

Paddy and I have already produced two similar books, The River Book: A Celebration Of The Suir (2010), and The Backstrand: Tramore’s Hidden Secret (2013). Those books made their way all over the world. Many people from far away told us the books had provided a creative re-entry to the world of their childhood. Comeragh is a book to be shared with both the local and the wider community, and we would like to believe that, as well as being an extremely attractive book, it will become the record of a rich heritage. There are many people who know these mountains in much more depth than we do. I have been aware at all times in my writing of a responsibility to try to do justice to both living experience and distant memory – to what is a very large area, with a very long history.

Both photos and text reflect and display an individual artistic sensibility. No photo is ever just an illustration of a point in the text – each photo is chosen primarily because it is a good photo. The poems respond in an entirely individual way to the mountains. We have walked together in the mountains and shared experiences, and we have walked as individuals. The final decisions on what to include are artistic decisions as to what will work best.

The project has taken nearly five years now. We thought we might never be finished. Right at the start I fell into a gully and broke my neck. The work of Semra, the South Eastern Mountain Rescue Association, is duly celebrated in the book. I would contract, and recover from, two different cancers subsequently. Paddy suffered a life-threatening viral illness. We have joked about including an appendix, detailing our various treatments and medication taken.

Charles Smith wrote about the Comeraghs in his 1746 History of Waterford. Talking about the four lakes in Coum Iarthar, he noted: “About these loughs are very fine echoes where a single discharge of a piece [gun] will seem like a volley of small arms which is again answered from the adjacent hills …”. Though the most solid of structures, mountains are also a kind of mirror – people give them the meaning they want them to have. The echo that mountains return to each individual voice is different. I was particularly fascinated by the way this huge upswelling of sandstone is constantly being eroded by the rain which falls on it. Still, silent rock, running, noisy water – this is the mountain marriage. However slowly, these mountains are being levelled by water, being washed away. These mountains, which are made from the washed down remnants of older mountains. Nothing is fixed, even mountains are in motion. Many of the poems in the book reflect this fascination.

Rain opens like a ghost in the valley,
smokes away over the hills.

Funnelled up a narrow gulley
wind roars like a waterfall.

being worn away grain by grain,
being floored by feathers, wind and rain.

Comeragh: Mountain, Coum, River, Rumour by Mark Roper and Paddy Dwan (Whimbrel Press, 2018) is available from bookshops in the south-east, Books Upstairs in Dublin, and by mail from whimbrelpress@gmail.com