The Ginger Man Letters review: beyond author’s vanity and snobbery 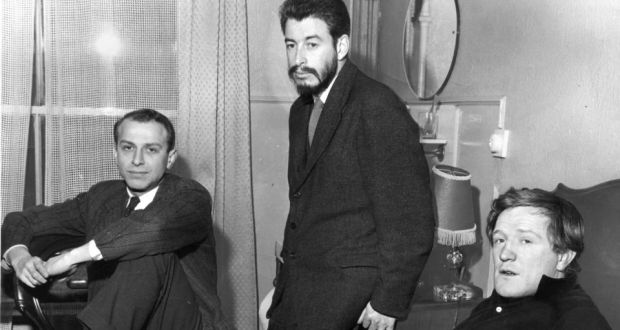 Hail to Bill Dunn! This is an excellent job of editing correspondence from the James Patrick Donleavy archive, with an intimate introduction, an upbeat appendix and as many learned footnotes as any reasonable reader could desire, all together consolidating the world-wide fame of The Ginger Man and probably prolonging the immortality of the author and some of his erstwhile close friends.

Dunn, an American journalist, first interviewed Donleavy in 1990, when he was touring the United States to publicise his latest novel. A cordial relationship ensued. In 2005, Dunn visited Donleavy at home in his Levington Park estate, near Mullingar, Westmeath, which strangely means “the crooked mill”. While compiling the bibliography of the Donleavy archive, Dunn was particularly interested in the letters between Donleavy, Gainor Cris and Arthur Kenneth Donoghue. Donleavy, the son of Irish-born Americans, was brought up in the Bronx, where he was expelled from his first secondary school for rebellious behaviour. When he moved to Ireland he was determined not to conform to the customs of Dublin academia. The letters show that Cris and Donoghue were equally determined to assert their individuality.

All three of them had served in the second World War, Donleavy and Cris in the US navy, Donoghue in the US army, so were financed by the GI Bill immediately after the war, when they met as students at Trinity College Dublin. Free from service discipline and independent of their families, they did as little scholarly work as they pleased and raised uproariously cheerful hell in the Guinness-galvanised new radical society known as “bohemian Dublin”.

Dunn suggested that a selection of their letters should be published in the single volume now available. The project had been enthusiastically foreseen by Donleavy and Donoghue, who made their letters long and gossipy, in the belief that eventual publication would make death seem less melancholy. Cris sometimes signed his name “SD” the initials of Sebastian Dangerfield, the wild, anti-authoritarian Ginger Man himself, but soon departed, leaving his Trinity friends without any explanation. Though he served as a model for Sebastian Dangerfield, his relationship with Donleavy was minor.

Donleavy was almost incapable of writing literate English, Dunn recognised, and Donleavy apparently did not care. “Donleavy’s letters,” Dunn writes, “reveal his unique grammar or lack of grammar. . . He tended to use dashes in place of question marks, periods, commas and even semicolons.” Dunn retained many of Donleavy’s spellings, which were often idiosyncratic, occasionally bizarre. Many of his sentences were not really sentences at all, being sustained by present participles without verbs in any other forms. He simply did not give a damn, and his insouciance gave his prose an impression of original spontaneity that seemed to fizz with testosterone, which is greatly appreciated by his fans, particularly rebellious young scholars. In a letter to Donoghue, a Harvard classics graduate, Donleavy, who was supposed to be studying microbiology, wrote: “education haunts me – such a waste for the brain – however I have always put orgasm and palate before graduation”.

In an article on “Tools and Traumas of the Writing Trade”, Donleavy claimed: “Writing is turning one’s worst moments into money.” One’s best moments as well, he might have added. “And money is one of the motives for becoming a writer. The others are leisure and money, women and money, fame and money, and sometimes just money all alone by itself.”

In 1951 Donleavy began writing what would become The Ginger Man, Dunn relates, “centred on Sebastian Balfe Dangerfield – ginger hair, charm, an Anglicised accent, a taste for the black stuff, remarkable ability to extract credit from merchants and extricate himself from calamities”. The hero was a composite caricature of Cris and the author, with imaginative embellishments. Written in his flamboyant, intermittently poetic, pseudo-Hibernian style, The Ginger Man is by far Donleavy’s best, most durably popular novel, after which later novels appear to be mere imitations. Brendan Behan, a drunken, brawling but intuitively insightful friend of Donleavy’s in their early bohemian days, read the innovative manuscript and predicted its global triumph. After 30 publishers had rejected it, Behan urged Donleavy to submit it to Maurice Girodias, proprietor of the Olympia Press in Paris, who had published some outstanding authors, including Beckett and Nabokov, under Olympia’s separate Merlin imprint. Donleavy was delighted, of course, when his novel was accepted and a contract was signed. He was unaware that Girodias was going to add it to his Traveller’s Companion series of pornographic books, with titles such as The Whip Angels and Chariot of Flesh. When Donleavy found out, he sued for breach of contract, and Girodias counter-sued when Donleavy found more respectable publishers in London and New York. In 20 years of litigation, Donleavy won, reducing the Paris company to bankruptcy, and was able to buy the remains for the bargain price of $800. Undeniably, there is obscenity in The Ginger Man, but it is the relatively innocent expression of youthful boisterousness, and helped the campaign to overcome international literary censorship, eventually even in Ireland.

Dunn presents letters that should do a lot to win over Donleavy’s detractors, who often accuse him of vanity, snobbery and posing in Savile Row tweeds as an Irish country gentleman. Reading Donleavy’s correspondence with Donoghue, one can contemplate the contrast of their personalities. Donoghue was erudite with a caustic wit and whose lengthy period of submission to psychoanalysis in Vienna apparently did nothing to ease his wanderings, often close to destitution, ranging from Europe to the absurd remoteness of the Utah-Nevada border, where he ineffectually advised a casino operator on how to run his business. For the umpteenth time, Donoghue’s letters complained of failure and depression. Donleavy, on the other hand, though regarded as a shy recluse in private, was a vigorous public self-promoter, continuously forcing his career onward and upward, as novelist, playwright and journalistic social commentator.

He kept proclaiming that his diet had progressed from rashers, eggs and tea to lobsters and champagne. To his credit, he persistently urged Donoghue to become a citizen of Ireland, when all sorts of artists were awarded exemptions from income tax, and where free accommodation awaited him in a Levington Park gatehouse.

Donleavy’s egocentric professional obsessions estranged his two wives and lost custody of his son Philip and daughter Karen. When Donoghue moved in, the long-distance pen pals’ close-up daily conversations irritated both of them so much that Donleavy ordered Donoghue’s eviction, but he had already departed voluntarily. Donleavy became so lonely in old age, calling himself the “Pasha of Heartbreak House” that he paid a succession of beautiful young women to live with him to arrange flowers, dine at his table and act as his social secretary. Unfortunately, one by one, they attracted wealthy local men, made old Donleavy a cuckold and absconded. The final pages of this riveting book are mercifully bright. The Ginger Man was in print all over the world, in innumerable languages, including Braille. In 2015, Lilliput Press published a 60th anniversary edition of The Ginger Man; in 2016, Trinity College Dublin awarded Donleavy an honorary doctorate of letters; and now Donleavy’s son Philip, custodian of the Donleavy archive, promises that next time Hollywood proposes to film The Ginger Man the estate will offer a deal without Donleavy’s demand for total approval of every stage of production.

To the Mad Molecule.