Seashaken Houses: fascinating account of lighthouses and their keepers 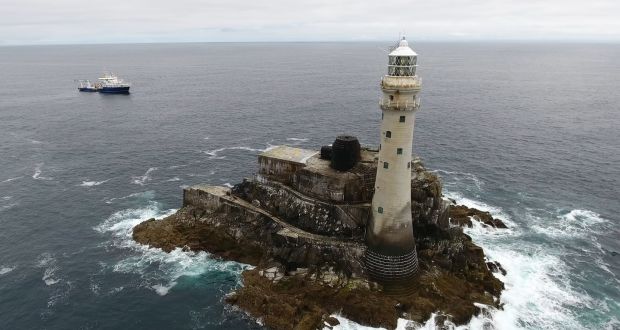 Fastnet off the coast of Co Cork: our collective fascination for lighthouses appears undimmed. Photograph: RTE/Great Lighthouses of Ireland

The total loss of life to shipwrecks is incalculable. An estimated three million wrecks litter our ocean floors, some thousands of years old. And without lighthouses, the seas would continue to claim many more lives. Yet lighthouses weren’t always viewed as benign, hardworking defenders of life. In his meticulously-researched and fascinating account of rock lighthouses around Great Britain and Ireland, Tom Nancollas recounts that some early projects were greeted with dismay: an 18th century lighthouse scheme was met with indignant opposition from Land’s End residents, unwilling to be deprived of shipwreck booty.

Between 1698 and 1905, 27 lighthouses were constructed on desolate and perilous footholds of rock to mark the most dangerous hazards to shipping in the seas around Great Britain and Ireland. Twenty survive today. The majority were built during a 19th century flurry of activity: “the proudest expressions of the way that navigation, and by proxy the sea, had been ‘reformed’ and its most perilous reefs ‘neutered’”.

Seashaken Houses begins with the pioneering Eddystone. Thirteen miles off Plymouth in the English Channel, it was built by eccentric entrepreneur Henry Winstanley in “the age of gentlemen amateurs”. In 1703, a ferocious storm carried the lighthouse off, Winstanley unfortunately inside it. Nancollas ends with Fastnet, constructed in 1904 eight miles off the coast of Cork. He journeys there via Eddystone II, Bell Rock, Perch Rock, Wolf Rock, Bishop Rock, and Haulbowline in Carlingford Lough. Rock lighthouses between 1811 and 1904 had a common construction: formed wholly in stone, with complicated joints and tapering profiles, reminiscent of oak tree trunks. Nancollas is a building conservationist, and his love for structure and heritage, for intricate detailing and finishes, shines through in the technical descriptions.

The book is arranged lighthouse by lighthouse. The writing fully comes alive in the asides and anecdotes (including one about a British Navy raid on Haulbowline during the Troubles: the co-operative keeper handed over the keys, but his wife “gave the armed Royal Marines a piece of her mind, saying they ‘could not tell her husband what to do’”) that there is the sense of another text floating below the surface, one which would have explored by theme rather than place. The chapter Interlude: Blackwall, about experimentation, is a good example. Brightness is measured in units of candela, each equating to the flame of a single candle. In 1698, Eddystone was illuminated by 60 candles. Just over two hundred years later, Fastnet’s light was a “staggering 750,000 candela in strength, a star beyond any magnitude then achieved”. Constant experimentation was vital, but given the dangerous locations and confined spaces, wasn’t possible on site. Blackwall, in a built-up industrial area by the Thames, was a lighthouse purpose-built for experimentation.

Nancollas gleefully relates an early 19th century anecdote from a lighthouse off the coast of Wales: the sudden death by natural causes of one of its two keepers placed the other in a macabre dilemma. With relief a fortnight away, the corpse would putrefy if kept in the tower, yet an improvised sea burial could look as though he had murdered the man. The surviving keeper lashed his dead colleague to the tower’s exterior. Heavy weather broke open the improvised coffin, “dangling the corpse’s arm against the window as if it were knocking to come in”.

His visit to Perch Rock gives a tantalising glimpse of the former domestic life of a lighthouse. At the mouth of the River Mersey, Perch is a curiosity: redundant and close to shore, its visible rocks, “Ozymandian, half-covered by the sand and lying close to the promenade”. It wasn’t updated during its working life, so retains a simple, late Georgian interior, though in complete disrepair and littered with bird carcasses in all imaginable stages of decomposition. In return for an overnight stay, Nancollas promises to clean it, but discovers that he and his friend have “slept off the novelty of adventurers and are now the tower’s humdrum inhabitants”. Such anecdotes aside, the promise made by the word Houses in the title never fully delivers on what domesticity was really like for keepers or their families.

In 1982, centuries of offshore living ended when Eddystone became the first of Trinity House’s rock lighthouses to be automated. When I left Fastnet after an overnight stay a few years ago, its visiting attendant Neilly O’Reilly – who features in Seashaken Houses – said they had to make a lock for the door when the lighthouse was converted to unwatched in 1989. They’d never needed one before because Fastnet had never been empty.

Uninhabited and automated, lighthouses work just as hard as they ever did, and our collective fascination for them appears undimmed. Yet, as Nacollas wryly acknowledges, “to assemble their interlocking granite pieces is to complete one puzzle; to consider their post-navigational future is to be faced with another”.