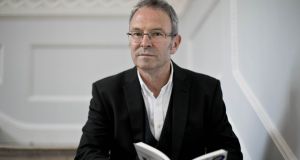 Mike McCormack: “A lot of people had faith in me, to stick by me and listen to me, and put up with me during the difficult years.” Photograph: Chris Bellew /Fennell Photography

The award, whose winner was announced at a ceremony in Dublin’s Mansion House, is organised and sponsored by Dublin City Council, and at €100,000 is the world’s largest prize for a single novel published in English.

If not quite a rags to riches story, it is a tale of recognition and renown after a career of great early promise was derailed by rejection mainstream publishers.

McCormack is from Louisburgh, Co Mayo, and lives in Galway where he teaches creative writing at NUIG. He is the fourth Irish author to win the prize in 23 years (after Colm Tóibín, Colum McCann and Kevin Barry). The award is part of the city’s role as a Unesco City of Literature.

The judges chose it because it was an “extremely enjoyable read, it is also poignant, moving and evocative. Although firmly committed to its particular Mayo setting, this is a novel of universal appeal: if you know Ireland, you will recognise this world; but if you don’t, you will still recognise Marcus Conway.”

Set in the west of Ireland as the recession is about to strike, Solar Bones is a portrait of one man’s experience as his world threatens to fall apart, and the dead man’s tale unfolds distinctively in one unbroken sentence, a seamless structure which the judges said “gives it a beautifully fluid pace”.

McCormack has commented about the unusual structure: “A ghost would have no business with a full stop. It might fatally falter and dissipate.”

The novel’s protagonist is dead and the citation says “the novel’s task is, through the miracle of language, to bring him back to life. And so it does, bringing him back to his life, a life experienced as both ordinary (in its daily routines) and extraordinary (in its probing of what it means to be alive).” The novel explores the meaning of the roles of husband, father, son, brother, colleague and neighbour, said the judges, and “offers a sharp, acerbic and often very funny response to contemporary Irish masculinity. Its account of the relationship between Marcus and Mairead is a particularly piercing and affecting portrayal of contemporary marriage, with its necessary inter-webbings and defended privacies; its desires, losses and rewards.”

Solar Bones has also won the Goldsmiths Prize, the Novel of the Year Award and Book of the Year awards at the Bord Gáis Energy Irish Book Awards, and was long-listed for the Man Booker Prize. It has been a hit with both readers and critics, with more than 8,000 copies sold, earning over €100,000. The prize is likely to boost sales further.

The success marks a return to the spotlight for McCormack after 10 years of “ups and downs. Not much happened,” said McCormack yesterday.

His 2006 novel Notes from a Coma, was critically praised but did not sell well, and he lost his publisher. They were his “years in the wilderness,” he agrees, and there is “a sense of satisfaction coming back. Yeah. A lot of people had faith in me, to stick by me and listen to me, and put up with me during the difficult years.” Those who kept faith were his wife, artist Maeve Curtis, his agent Marianne Gunn O’Connor, and the publishers at Tramp Press, Lisa Coen and Sarah-Davis Goff. “The heroes of the book, from the moment I finished writing it, have all been women.”

They were hard years, “just ducking and diving and trying to put a wage together from bits and pieces”. Always writing, but “There was a time when quite literally Marianne could not give my work away,” McCormack said.

The announcement is a big win for the small imprint Tramp Press, the first Irish publisher to win the award, and independent publishing generally. “We are thrilled to see Mike McCormack’s extraordinary novel receive this important award,” said Lisa Coen, publisher at Tramp Press. “Solar Bones is an incredible book, and Mike is a great writer.” Her colleague and co-founder at Tramp, Sarah Davis-Goff said McCormack is “one of the world’s greatest living writers, and Solar Bones is a masterpiece. This recognition for his work is so wonderful and we could not be more delighted for him.

“When we wrote our first press release in 2016 about Solar Bones we described Mike as being one of the world’s greatest living writers. I think people generally accepted this as the usual publisher hyperbole, but we were as always quite serious: Mike is one of our most important contemporary writers, and seeing his work acknowledged in this way is so important and so wonderful.”

McCormack is full of praise for Tramp. From the start, “they just understood it. And everything that every other editor had whined and moaned and griped about, they thought, no, no this is brilliant. The whole experiment thing, the quiet domesticity, that engineering stuff, the whole middle class white male thing, the happy family thing – everything other publishers had against it, they said no, we can run with this, we can make a sale out of this. We think there is an audience out there for a book like this.”

The International Dublin Literary Award is unusual in that its 150 nominations come from public libraries in 111 cities across 37 countries, and also recognises both writers and translators. The 10 shortlisted novels are chosen by an international panel of judges, including Irish poet Vona Groarke, Chinese British novelist and filmmaker Xiaolu Guo, Nicky Harman of the Translators Association, novelist Courttia Newland, Mpalive Msiska of Birkbeck, University of London, and non-voting chair US Judge Eugene Sullivan.

McCormack singled out the significance of the Dublin City Council backing the award. “That just adds to it. It is a civic gesture and investment that adds to the prize, and that’s even more thrilling that it’s completely unsullied by corporate intervention he laughs. I’m absolutely thrilled by it.”

Solar Bones was nominated by Galway Libraries and by Nottingham Libraries, who described it as “a readable, experimental novel set in and described as a hymn to small town Ireland. This is such a unique and unusual book that we feel the author deserves recognition. The novel is written in a single sentence which could have felt like a literary gimmick but instead comes across as really accomplished storytelling. In addition to his distinctive technique McCormack also brilliantly describes the area in which the book is set, making it a powerful element in the book.”

Solar Bones will be a popular as well as a deserving winner of the prize. Of the others on the shortlist, the standout titles were the other Irish contender, The Lesser Bohemians by Eimear McBride; My Name is Lucy Barton by Elizabeth Strout; Human Acts by Han Kang, translated from Korean by Deborah Smith; and The Unseen by Roy Jacobsen, translated from Norwegian by Don Bartlett & Don Shaw. The other shortlisted novels were Baba Dunja’s Last Love by Alina Bronsky, translated from German by Tim Mohr; The Transmigration of Bodies by Yuri Herrera, translated from Spanish by Lisa Dillman; Distant Light by Antonio Moresco, translated from Italian by Richard Dixon; Ladivine by Marie Ndiaye, translated from French by Jordan Stump; and The Woman Next Door by Yewande Omotoso.