John Banville hoax call was not from Nobel academy 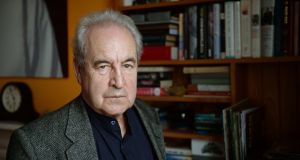 A phone call to Irish writer John Banville leading him to believe he had won the Nobel Prize for Literature was not made from the offices of the Swedish Academy which administers the award, it has said.

An investigation into the apparent hoax earlier this month has concluded that whoever made the call must have been able to fake the source phone number, giving the impression it had come from its offices.

“It was a cruel joke. Naturally, the academy rejects this act,” it said in a statement, appearing to bring an end to the latest controversy at the Swedish institution.

Officials have been in contact with Mr Banville to inform him of the outcome although the Booker Prize-winning author was already convinced the call was a fraud. The academy has said that because no infringement had been made, it would not report the matter to the police.

As previously reported in The Irish Times, Mr Banville had received the call on October 10th, shortly before the announcement of both the 2018 and 2019 awards.

However, after the actual recipients were revealed at a press conference, a second call was made to the writer profusely apologising for the confusion and insisting it had been the result of infighting among academy members. Both calls were from a man claiming to be Mats Malm, permanent secretary of the Swedish Academy.

Following the outcome of its investigation, Mr Malm said: “During the call, the number presentation displayed the phone number of the academy.

“We have received the record of outgoing calls from the telephone company, and we can rule out that the call was made from any of the academy’s telephones. The caller has somehow been able to manipulate the number presentation.”

The completion of its inquiry appears to draw a line under the matter leaving the question open as to who the mystery caller might have been.

Mr Banville had previously speculated he was simply being used by the person in question in an attempt to damage the reputation of the academy. The institution was rocked by sexual assault allegations and high-profile resignations in 2017, which ultimately led to the cancellation of last year’s prize.

Having initially believed the voice message to be real, Mr Banville attempted to return the call and reached the offices of the academy, but could not get through.

“I think the academy should investigate it because I don’t think the hoax was aimed at me,” he said in the aftermath.