‘Steve Collins said I only helped him with the spelling. That hurt’ 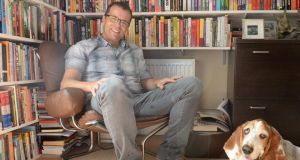 I’m an accidental ghostwriter and it’s all Paul Howard’s fault. My friend Paul, the Ross O’Carroll Kelly creator, had interviewed racing driver Rosemary Smith, during research for his excellent book on Tara Browne, I Read the News Today, Oh Boy.

Rosemary told him that she was looking for someone to write her life story and Paul thought of me. I think the main reason Paul put the two of us together was because we are of the same vintage. Glamorous racing legend Rosemary Smith is 81 now and I am 79. Paul piqued my interest, by sending me a radio interview she had given to Ray D’Arcy, but still I wasn’t sure.

Then Paul told me she was also racy in a different way, having had flings with Adam Faith and Oliver Reed. That clinched it. I had to meet her.

I met Rosemary Smith for the first time in the bar of the Fitzwilliam Hotel in Dublin. She had brought along photographs of herself with famous people and lots of pictures of cars.

The cars meant nothing to me, I don’t even drive. I didn’t know an Aston Martin from a Ford Fiesta. I also told her I had never written a book before but she didn’t seem to mind.

I went home and Googled how to be a ghostwriter, but that didn’t help. Eventually I worked out my own strategy, which was to record every word she uttered as we sat together over our coffee, and then go home and transcribe it. That way I became familiar with the language she used and could be faithful to her way of saying things.

That was essential. It was Rosemary’s book and I had to tell her story in her voice, and lose mine, somehow.

For the next year and a half, we met every Tuesday morning at 11am at the Royal Irish Automobile Club on Dawson Street. The first few sessions went well until I discovered that Rosemary’s memory could not be trusted. When she told me the date of her marriage, she was out by two years. This meant I had to fact check everything and I spent hours on the internet, verifying was she first or second in that rally, did she have that crash in the 1963 Monte Carlo, or was it 1964?

I bought books on racing and rallying and double-checked everything. I read what people had said about her over the years and found old television footage. I was mesmerised by the beautiful young woman in the American TV programme What’s My Line, in which she appeared in 1966, shy and self-effacing. Rosemary is a strong-minded woman, with decided views on many things, and once I came to terms with that, our relationship flourished. Rosemary says that I know more about her than she does herself.

When the courier arrived on my doorstep with the finished product, I felt a great sense of achievement and gratitude. I am privileged to have had the opportunity to be “Mrs Ghost”, as Rosemary calls me. I was honoured to tell her fascinating story. Driven is published by Harper Collins.

Paul Howard, ghostwriter of ‘Celtic Warrior’ by Steve Collins and ‘Time Added On’ by George Hook

I’ve had two very different ghostwriting experiences, one bad, another great. Celtic Warrior was my first book and also my first big break professionally. It happened at a time when Steve Collins got the Chris Eubank fight, a potentially career-making bout. I was 24 at the time and thought it could be a career-making book for me too.

In the end it didn’t really sell. Publishers had taken a gamble thinking Collins would sell books but it didn’t pay off.

Two things you hear ghostwriters gripe about are money and credit. It pays much less than people think and the writer, despite all the graft, doesn’t usually get as much credit as they’d sometimes like.

When Steve Collins went on Kenny Live he was asked him about the book and Collins said that I had just helped him “with the spelling” which, at the time, really hurt after all the work I’d put in.

A few years later when Collins was being sued in a breach of contract case, it was suddenly in his interest to change his story. He told the court he called me the Milky Bar Kid and said I’d written the whole thing.

The experience with George Hook was very different. He’d obviously thought a lot about his life and many of his stories had been honed over the years on the after-dinner circuit. I’d go home and transcribe the tapes and Hook’s voice was clear – it was more an act of literary ventriloquism than anything else. I’d had to struggle a bit more to find the voice of Steve Collins.

When it comes to marketing ghostwritten books, it’s important to let the public believe it’s written by the celebrity. There is supposed to be only a vague hint of the ghostwriter in the entire process.

Good ghostwriters should be, as the name suggests, invisible. By the time I’d written Hook’s book, I was established myself and I didn’t need credit. My name appears only in the acknowledgements and that’s as it should be.

The biggest tip I’d give someone ghostwriting a book is not to impose your style of writing or speech on another person.

I once read an autobiography by snooker player Jimmy White in which he described a piece of chocolate cake as “beguiling”. That was it for me. I couldn’t read any more.

Dancing With the Tsars by Ross O'Carroll-Kelly is out now

Catherine Cleary, ghostwriter of ‘The Stars are Our Only Warmth’ by Alice Leahy

In 2016 I found refuge in a basement on Bride Road in Dublin’s inner city. Mondays with Alice were spent sitting in a room stacked with an assortment of knitted hats or chocolate biscuits, bars of soap, shampoo, deodorant, from the web of kindness that supports her team’s work with homeless people in The Alice Leahy Trust.

We were knitting together her life story, starting in her home place Annesgift near the Tipperary village of Fethard. In the stone yard on a freezing January day we tried to imagine the servants’ daughter who had the run of the big house, the little girl who loved horses and dogs and believed in her right to be heard.

We toured the abandoned corridors of the Dublin hospital where she trained as a nurse and the inner city streets where she first inhaled the unmistakable smell of poverty.

Making a memoir teaches you a lot about memory, how we use our imaginations to remember the stories of our lives. I was not so much a ghost writer as a ghost medium, putting flesh back on bones, inviting Alice’s past selves into the room and interviewing them about their extraordinary experiences.

“Hello younger Alice. How did it feel to gently disarm an angry man swinging a sharp knife at you?” It was a privilege to write in the first person voice of someone else when that first person was Alice Leahy.