How do you make sense of the Vietnam war? 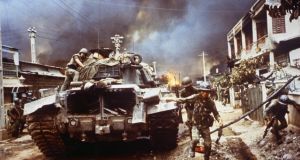 “There was never one Vietnam war,” writes Max Hastings, but “fifty different ones,” depending on time, place, and experience. In this wonderfully impressionistic book, Hastings tells a familiar story eloquently. He draws on his time as a journalist with BBC1’s 24 Hours, when he occasionally covered stories on the war in Vietnam. He skilfully uses a series of vignettes from all sides of the conflict to capture the nature of the Vietnam war. We hear from the son of a landlord who was harassed by the communists following their 1954 victory over France; an American prisoner of war; a South Vietnamese actress who was left penniless and without a country after Saigon’s collapse in 1975; and many others whose lives were turned upside-down by the long and costly war. Hastings is a sympathetic writer, and he clearly understands the scope of suffering on all sides in Vietnam. He comes to this place of understanding because he believes that both North and South Vietnam “fell into the hands of oppressive regimes” following the 1954 division of the country.

Hastings’s great gift is his ability to synthesise large amounts of material into a compelling narrative. He readily admits that this is not a complete chronological history of the war but is rather a glimpse into what it was like for those who experienced it first hand. Few experts will change their notes after reading this book, but they will appreciate Hastings’s flair for the use of a quote and the turn of a phrase. Hastings knows how to use a perfectly pitched quote to convey a larger message, such as when journalist Malcom Browne, who took the photo of Buddhist monk Thich Quang Duc’s self-immolation, recalls, “My role as a reporter did not allow me to interfere in Vietnamese politics.”

There is some policy discussion, but the majority of the pages are filled with the voices of those on the ground in Vietnam. Sometimes this approach gets Hastings in trouble, as it did Ken Burns and Lynn Novick in their recent documentary series on the Vietnam war. Inevitably, Hastings ends up with a junior American officer explaining the finer points of American foreign policy in Vietnam. It is difficult to tell the complicated story of the modern Vietnamese revolution and the American response to it through vignettes.

Still, Hastings has created a wonderful sense of the war by paying close attention to what others have said. He uses contradictory testimony and memories to recreate the chaos and confusion that surrounded Vietnam. At times, he does fall victim to familiar tropes. For example, in a passage that will certainly make many Americans cringe, Hastings writes: “Yet the vast majority of the three million Americans who eventually served in the country departed without holding any more meaningful intercourse with its inhabitants than a haggle about the price of sex.”

But at other times, he skilfully challenges the standard story. Discounting journalist Frances FitzGerald’s overly romantic view of peasant life and the success of the communist revolution, he accepts instead the more nuanced conclusion of US senator and presidential hopeful Eugene McCarthy that the problem of Vietnam was not whether Americans were on the wrong side but rather, “Was there any proportion between the destruction and what possible good would come out of it?”

Readers will find just enough familiar events to keep the narrative moving along amid a host of smaller scenes. Hastings brilliantly captures the siege at Dien Bien Phu, a remote French mountain outpost in northern Vietnam, where a lengthy Viet Minh assault convinced Paris to quit the war and sue for peace. His description of South Vietnam’s first president, Ngo Dinh Diem, and his oppressive regime will resonate with readers, as will his compelling retelling of the Buddhist crisis of 1963.

Hastings’s portrayal of Lyndon Johnson is not as sympathetic or complicated as most recent scholarship. He largely blames Johnson for not promoting debate over Vietnam in Congress and for not preparing the American people for a long war. These decisions doomed the president’s attempt to fight this war in cold blood and cost the politically astute Johnson his presidency. Hastings concludes that Johnson “asked all the right skeptical questions” but he declined to “heed their answers.” Johnson specialists will quibble with this conclusion.

Hastings also seems to have a lasting quarrel with Johnson’s secretary of defence, Robert S McNamara. He argues that McNamara “wielded greater influence on Vietnam policy than any of his fellow countrymen save successive presidents” and that most of that power was used for destructive gains. Maybe. But Hastings’s vendetta against McNamara prevents his acknowledgment of the secretary’s growing pessimism about the war and his role in the bombing pauses in 1965 and the secret peace contacts from 1965 to 1967. Ironically, Hastings gives Henry Kissinger a pass. He concludes that Kissinger “deserved the gratitude of the American people for extricating them from their long nightmare, clad in a threadbare shift of dignity.” Arguing that Henry Kissinger ended his war for peace honorably is entirely problematic given his role in the bombing and invasion of Cambodia, the bombing of North Vietnam, Vietnamisation and Saigon’s collapse.

Hastings’s treatment of the fall of Saigon and the war’s aftermath is moving. He tells with dignity and respect the stories of former South Vietnamese soldiers who suffered in Hanoi’s re-education camps. The economic collapse of post-war Vietnam is also well told. Hastings could have said more about the sizeable population in South Vietnam that was anti-communist and anti-Saigon. Their voices are now being heard through the wonderful works of Viet Thanh Nguyen, Andrew Lam and Thi Bui, among many others. There were several third-wave groups in South Vietnam that need their day in the sun. Perhaps the future of US-Vietnamese relations relies on getting these voices into print and into our histories.

Hastings’s lasting conclusion in this marvellously readable account of the Vietnam War is that American policy was deeply rooted in the demands of US domestic politics rather than in a realistic assessment of the interests and wishes of the Vietnamese people. This is not an original interpretation, but it is accurate.

Robert K Brigham is the Boskey professor of history at Vassar College and author of, most recently, Reckless: Henry Kissinger and the Tragedy of Vietnam (PublicAffairs, 2018). Brigham’s father served in Vietnam as a marine combat photographer, earning a Purple Heart at Hue during the Tet Offensive