Shining a light on Tuam and the ubiquitous adoption machine 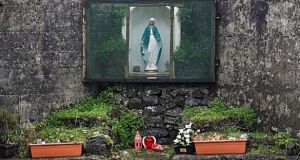 My Name is Bridget: The Untold Story of Bridget Dolan and the Tuam Mother and Baby Home,
Alison O’Reilly,
Gill Books, 319pp

When the car arrived to take Bridget Nolan to Tuam in January 1946, she had her bag packed. After the 26-year-old single woman had confessed to her parents that she was pregnant, the priest had been sent for, and it had been agreed that she would be brought from home, a small farm in Co Galway, to the Mother and Baby Home, run by Sisters of Bon Secours, to avoid bringing shame on her family.

In a bad situation, it was “for the best”. Bridget had no part in the decision. She was “in trouble” and had no choice. When the moment came to leave, she said goodbye to her father. He turned away and looked out the window. Her mother, continuing with cooking bread at the fire, simply said that it was “for the best”.

Bridget would never return. She had been banished from respectable Irish society. As author Alison O’Reilly puts it: “Her shame was absolute and permanent . . . Bridget went from being a loving and loyal daughter to being an untouchable outcast.”

When, weeks later, she gave birth, she was forced to do so without pain relief and in silence. Her baby was taken away. It was “for the best”. A year later she would be sent out, alone, to become a servant, never to meet her son again or even hear news of him. She would be returned as a “repeat offender” and would have a second son, who died. All was covered up by the system. It was “for the best”.

O’Reilly’s fine and moving book demonstrates, however, that all of this was very far from being the best. It was desperately cruel and inhumane. Women grew old tormented by the loss of their babies and babies grew into adults haunted by the loss of their birth mothers. Enforced silences lasted lifetimes and beyond death, causing great pain. Many older relatives refused to speak about the past when a new generation came wanting to know about the lives of mothers and vanished siblings.

Church and State had “worked together to control women’s bodies in order to enforce ‘correct’ sexual values”. They continued to collude in falsifying records, which thwarted searches, and maintaining discriminatory laws. Unmarried mothers are still among the poorest people in Irish society. Women still do not have the right to choose.

O’Reilly is the journalist who in 2014 broke the story about the discovery of the skeletons of hundreds of babies in a septic tank in what used to be the grounds of the Tuam Mother and Baby Home. She did so in the Irish Mail on Sunday. She gives full credit to local historian Catherine Corless for the years of painstaking archival work she had carried out before this, assisted by others, including some with a personal interest in the research, notably Anna Corrigan, daughter of the late Bridget Dolan. Corless had in fact published an account of her disquieting findings concerning an unmarked grave in 2012 in a local history journal, but it had been ignored.

O’Reilly’s story was disdained. In 2014, a French filmmaker trying to follow up on it requested an interview with the Bon Secours order. She received an extraordinarily crass letter from PR woman Terry Prone: “When the ‘O my God – mass grave in West of Ireland’ broke in an English owned paper . . . it surprised the hell out of everybody, not least the Sisters . . . ”, she wrote, denying there was any such grave.

Prone would later apologise and the nuns would declare themselves “shocked and deeply saddened” after O’Reilly, Corless and others persisted with their investigations to the point that irrefutable evidence emerged. There was a further expose in the Mail online, and bloggers like Izzy Kamikazee, Donal O’Keeffe and Shame of Ireland, ensured the story “spread like wildfire across social media”. The Government established a commission of inquiry. This found there was a mass grave containing the remains of perhaps 800 babies and children; the story was carried by major media outlets worldwide.

O’Reilly uses the harrowing stories of Bridget Dolan, her lost sons, and her daughter Anna to powerful effect in exploring not just the history of Tuam and other Mother and Baby Homes around Ireland, but the lasting impact this dreadful system had on families, communities, and wider Irish society. She includes other stories. One entitled “Snapshots of Stolen Lives” has many heartbreaking lines: “I was just a slave”; “I cried for days”; “I survived but life is terrible”; “She was groomed and raped by a married man twice her age”; “I suffered with depression for 23 years”; “We should not have been made to feel so ashamed”; “You think life goes on and you get over these things. You don’t. It is like it happened yesterday. I have lost my mother and my son and I have been an orphan all my life. I don’t feel sorry for myself, but I would love, before I die, to know exactly who I am.”

The Adoption Machine: The Dark History of Ireland’s Mother and Baby Homes and the Inside Story of How Tuam 800 Became a Global Scandal,
Paul Jude Redmond,
Merrion Press, 289pp

Paul Jude Redmond was born in the Castlepollard Mother and Baby Home in Co Westmeath in 1964 campaigns on behalf of those whose lives were ravaged by this cruel church-State regime, many of whom are still, today, forced to struggle to find out exactly who they are. Redmond’s book, with a foreword by Clare Daly TD, acknowledges a long list of “hardcore activists around the world” and in his prologue he describes how a visit to the “cold, grey, ugly institution” in which he was born turned him into “a survivor determined to do ‘something’ ”.

He realised he wanted to make it impossible for people to forget the brutal history of the homes: “I wanted to ram hard facts and figures down Ireland’s throat.”

He says that “100,000 girls and women lost their babies to forced separation since independence in 1922”. And that “at least 6,000 babies died in the 9 Mother and Baby Homes where some 35,000 girls as young as 12 and women as old as 44 spent years of their lives”. He sees his book as “an activist tactic”, part of an ongoing campaign “to ensure that the last dirty secret of Holy Catholic Ireland is finally dragged into the light”. He believes that too many people still don’t care.

Inevitably a book with such an agenda is hard hitting and furious, its strength and weakness. There is a good and useful history of the homes, which properly distinguishes them from the Magdalene Laundries and other church-run, State-funded institutions. The horrific reality of life behind those tall grey walls is laid out: the harshness, cold and cheerless dormitories, wretched food, unpaid manual labour and brutal separations. Redmond comments on the way men responsible for the pregnancies were never shamed in the way the women were. He explores the outrageously high rate of infant deaths over the years, the scandal of what was effectively the illegal but State-sanctioned sale of babies to the US.

The role of campaigns in changing Ireland is well acknowledged. Redmond praises the organisation Cherish, set up by unmarried mothers in the early 1970s, for bringing about the beginning of the long, slow end of the regime that identified them with shame and sin and punished them accordingly. His own story, including the disgraceful lack of respect with which he was treated when trying to trace his birth mother, a constant shadow flitting about refusing to come into focus, is deeply moving. So is his description of coming to terms with the reality that she does not want him in her life. The love of his children and wife help him through this profound disappointment.

However, Redmond is himself judgmental, self-righteous and sometimes belligerent in ways that do not serve his cause. Everything is black and white, good or evil. There are heroes and villains. He is open about the fact that he has fallen out with many other campaigners, relentless in his commentary on those who he deems to have fallen short or taken wrong turnings. A tough edit could have enabled a better book to emerge from The Adoption Machine but its unresolved rage is nevertheless instructive.