If London is a city that crushes, it also endlessly inspires

Review: ‘Guy Gunaratne’s In Our Mad and Furious City’ comes alive when read out loud 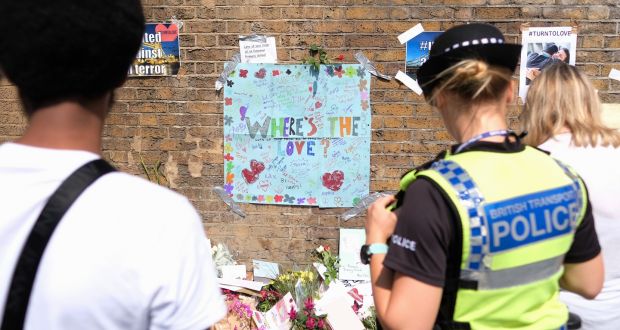 People stop to read some of the messages of support and love for the Muslim community near London’s Finsbury Mosque in June 2017. Photograph: Leon Neal/Getty Images

Book Title:
In Our Mad and Furious City

“See London,” says one of the five narrators of Guy Gunaratne’s debut novel. “This city taints its young.” If London is a city that crushes, it is also one that endlessly inspires, endlessly deserves looking at. The paradox has been expressed by Zadie Smith, Martin Amis, Monica Ali and Kate Tempest, to name some of the most instantly available to the mind: their Londons have been desolate but also teaming; threatening but comforting; near dystopian but forever present and simply ordinary. In Our Mad and Furious City depicts men outside bookies “Waiting on Jesus for their lot.” “Man only come around these Ends for a barber’s, canned food or like batteries, ennet,” says Selvon, one of the young protagonists. “Nuttan more.” The other thing about London: it can take and furnish almost unlimited redescription.

In the London of Gunaratne’s imagining (or reimagining), racist marches and countermarches following the Lee Rigby-style killing of a white “soldier-boy” by a young black Muslim man have spilled through a north west London council estate. Skips are overflowing as police cordons limit collections. It is turning into a sort of hell. Amongst this, three young men try to survive or escape. Ardan and Yusuf live on Stones Estate. Selvon lives “off-Estate”in a “proper house with a proper fam” but goes there to run and play football. He’s trying to become an athlete so he can find a “way out”. Ardan writes grime verses as he looks at the city from his tower block at sunrise. Yusuf wishes to extricate himself from the influence of his mosque. His dead father had been its cultured and moderate imam, sceptical of any sort of militancy. Without his guidance it has fallen under the more radical Abu Farouk, and follows “a coarser kind of narrative” than the one his father espoused.

Older Stones inhabitants contribute their voices, too. There is the slightly bigoted, lonely Caroline: “Number eighty-six and the smell of curry, no surprise”. She is nursing her own trauma, and was sent from Belfast to London by her Republican family during the Troubles. Nelson came to London from Montserrat just in time for the Fascist Oswald Mosley’s last political stand, and was drawn into anti-racist activism. “Who is this new generation?” Thinks Nelson. “They walk like crabs with them backpack and long limbs.” Both these newcomers from a different generation discovered that they wanted no part in sectarian, retaliatory violence, whether against Latimer Road skinheads or Belfast Loyalist soldiers. And so this book becomes a splintered, polyvocal generational saga about people who don’t have it in them for extremism, even when extremism beckons on all sides.

This careful judgment seems to exist at all levels of Gunaratne’s debut. The author has a gift for sentiment without the refuse of sentimentality. Characters are made sympathetic in the space of a line. “Slowly I rise to my feet, my hands in my pockets like that’s where I keep my courage like.” The subtle hierarchies of racism are probed with nuance. Yusuf is secretly defensive when someone who has just come from Pakistan claims a simplistic sort of fraternity; he himself has lived in London his whole life. Description is always vivid: Ardan hides loose change in his socks to fool muggers, who: “Made us un-sock and hand over the pees, made us wipe clean the sock stink before doing it.” Sock-stink has a Joycean feel to it.

Still, the writing can, at times, threaten to turn into something more suited to spoken-word, at odds with flowing prose. Especially Ardan’s voice, influenced as it is by the grime he writes and listens to: heavy with alliteration, sneaky internal rhyme and sprung rhythm. (“Filled with the noises of cursed foil, kicked-down doors and borough folklore. Same sounds found in all Ends, ours included.”; “a push-pull of ancestry and meaning”.) Luckily this turn never comes to pass. The prose remains alive, alert and subtly integrated, with various accents and non-standard Englishes raising themselves up to the same very high literary watermark: “our words clipped and surging with our own code and fuck anyone who disagreed-yuno”. This is one of the hardest things to pull off for a prose stylist. The Dominican-born American writer Junot Diaz is, possibly, the finest living exponent of it. Gunaratne is no doubt on his way. What you are left with – always a treat though not by any stretch as essential to all writing as some would have you believe – is a prose that benefits from being read aloud. But more so, a prose that just plain deserves to be read.